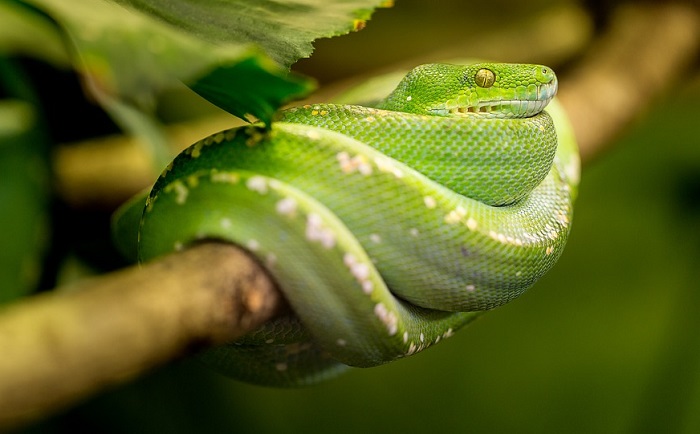 Our dreams, in general, are very complex and consist of different symbols, and anything we see in our reality can become the motive of a dream, in a completely different version.

Its meaning and significance, in reality, does not have to be the same as in a dream world – you can have seen, feel, and taste things you did not ever see, felt, or taste in your life.

In a way, dreams are free journeys into the unknown.

Animals are common symbols in the dream, and there is no one who had not dreamt about the snake; you do not have to have contact with the snake to have a dream about it.

The symbolism of the snake is what counts, what it represents for you, based on your individual characteristics, etc.

The snake is, as we have already said, a very common symbol.

Its meaning and significance in the life of the person who had such a dream depend on all elements in a dream, but one of the more prominent traits regarding the snake symbol in dreams is its colors.

Here, we want to speak more of the green snake – what does it mean when you have dreamt about it.

As usual, think of all aspects of a dream for a more accurate decoding process.

Primarily, when we are speaking of a snake (in general), not just the green one, we can say that this is the motive that can be connected to one of the two things: sexuality or some previous, evil element in your life.

Some say that when you have a dream about the snake, it shows that in your childhood you were surrounded by such people or a person.

Who this person is hard to say. There can be enough evil people in close or distant relatives, in the neighborhood, in the circle of friends and acquaintances… and you probably know best which person has been following you all your life and threatens you and your family.

The snake is there. She may have been passive before, but now that you’re older, she’s started hissing and fighting for your attention.

Another interpretation of such a dream is the one where the snake is associated with your own sexuality – depending on the appearance of the snake, the status of your sexuality changes. It can be suppressed, hidden, and fake, overexpanded, etc…

Now, how the interpretation changes when the snake in your dream has a certain color?

The green color in dreams, in general, is associated with the person’s need to prove something, to gain status, etc. In some cases, it can be the manifestation of a tendency to make more money, or it can be the need to relax and restore the energy.

Speaking of money, it is the first meaning of the dream about the green snake – it can be the symbol of greed for money. It can show numerous problems that have been leading you toward the same outcome.

Alternatively, it can also be a drastic effort to crack the problem (in dreams, it is the green snake) into parts to no longer be so bad, but sadly, you may not be able to do it.

If the green snake is coming back to you and tries to attack you in a dream, in that case, someone or some inner need keeps returning to you, and therefore it becomes more and more deadly.

It’s time to deal with it once and for all. You need to face the daemon that has been haunting you so that you never again live in fear.

If in a dream, the green snake succeeds in biting you, and you bleed, that bite is a representation of experience and vitality; it does not carry a negative symbolism.

If it bites you on the neck, in that case, a dream suggests that you cannot live and succeed if you continue doing what you have done so far.

Such a dream shows that you have lost vital energy and are morally frail. In an alternate version, it is a call to renew your igniter and try to repair it.

Such a dream is present in your life just to show you how you can change with ease. It is also recommended to recall the feeling you had during the bite. Have you felt scared (it shows fear of a change), or were you happy and felt ok when the green snake bites you.

In a version of a dream where the green snake is in your bed, such a dream may be the indication of fear regarding omissions, difficulties, and severe setbacks. This can be an aggravation of the condition or deception.

Also, commonly, these dreams come as a reminder that around you, there are enemies and envy and that you are not quite sure how to deal with it. It is important to inspect the clique of colleagues and rest for the time being.

If there is just one huge green snake in your dream, such a dream shows that in your surroundings, there is an envious character who wants to spoil your well-being mood and decrease his self-confidence and success. On the cost of you – do not let it happen.

If in a dream a green snake bleeds, in that case, something in your family relation is not ok, and you must take a good look at it and resolve those issues.

Decoding the Dream about Green Snake

So, the dream that has the main motive of a green snake does not have to be always a bad sign, and the main thing is that you are not afraid of such a dream, even the one version where the snake, green in this case, bites you.

In the process of decoding such dreams, it is worth saying that for many civilizations, snakes, in general, are worshiped and celebrated as a symbol of longevity and health.

However, there are claims that each person had a coiled snake at the base of the spine, symbolizing a strong spiritual force.

The same case is when you have a dream about the green snake – depending on all elements of a dream, the meaning changes. These are not just “cosmetical” superficial changes; these are the core shaking changes that you must endure so that you’re staying healthy.

If someone you love, in a dream, was attacked by the snake, in real life, such a dream shows that you, as the one who had this dream, will reveal some hidden truths, not just about you, but your entire family. And it does not have to be something bad, on the contrary.

At times the green snake in a dream may symbolize a kind of plan that you have been having for a long time.

In some cases, the green snake is the symbol of someone young – and that person may be hurting in reality, or it can show a bit of excessive selfishness.

What this dream is telling you is to be the bringer of the change – you cannot change that other person, but you can shed your skin (the symbolism) of the snake and change yourself. This shows that your attitude toward that person also changes.

In any case, the dream where the green snake is antagonizing you, trying to chase you, bite you, etc., is very commonly an indication that you are the initiator of the fight for which you are not prepared, and this is what the green color brings into the picture. Green means new, inexperienced, naive, and maybe even.

In some version of this dream, the green snake in a dream may be associated with the matters of money, in the widest possible way – it can speak of the money, gain, loss, but also the motives and the greed that is taking you towards it or away from it.

It can show that some kind of debt will come back to haunt you. In some cases, such a dream can show that you will not be able to recover from some problematic situation – it shows that you are naive, not mature enough to see what is going on in the world around you. It is ok if that ignorance does not represent problems for you, but if it does, then you must deal with it.

One more thing is the one meaning that speaks of the sexual tensions and desires that are always associated with snakes, and in this case, it is the snake that is green, so the desires you have maybe just like that, childish and naive, inexperienced. And such a dream shows that now is the time to make changes, to move and mature in this sense.

Such a meaning is seen as pleasant, showing that many new and good things will occur in the love area of life. Enjoy it as much as you can, and do not be afraid of the change.

A snake’s presence in a dream for an extended time indicates a possible threat lurking in the subconscious of sleep.

Maybe it’s some kind of internal conflict or an unresolved youth problem—dreams of a green snake bite – to a sense of difficulty in making a decision.

The dreamer, because of his indecision, cannot move towards his own in order.

However, these dreams have another explanation, according to which a green snake bite appears as a warning.

Dreams show that our plans will fail shortly, and the good thing is that it can be a hidden blessing; such a change of plans may bring something better.

In some cases, as you could see, if you are escaping from the green snake, it shows that you will be able to resolve difficulties left in the unfinished history.

Such dreams will symbolize victory over the current situation, the search for peace and harmony.

Think of your loved ones, sometimes this dream is associated with the family, and it is the subconscious message that shows you that you are worried about your loved ones, that you have hurt them with the snake because you trusted it too much.

Now you have learned the truth or. That’s what your subconscious wants – it’s time to get rid of the scary part, and in this case, it is the snake.

It should be noted that the snake can also be your personality, full of worries or repressed sexuality, and therefore stand above others. Fear sexuality, intimacy, and obligation.

This may be an alternative meaning to the snake symbol and having in mind that here the snake is green – it is just like your personality, young, happy, restless, free and joyful, maybe a bit naive.