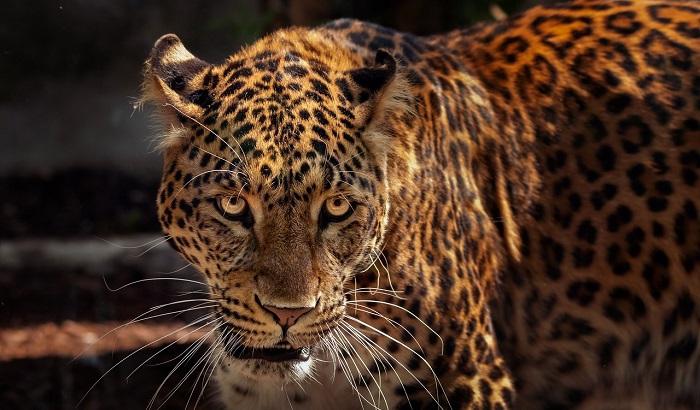 The jaguar is a wild cat native to America. It lives in areas from the Southwestern United states and Mexico, across Central America and up to Paraguay and northern Argentina in South America. These cats are almost extinct from the United States and are listed as near threatened species, with their numbers in constant decline.

The jaguar belongs to the genus Panthera, and is the only extant New World member of this group. It shares a common ancestor with lions, tigers, leopards, snow and clouded leopards.

This large cat is also the largest cat species of the New World and the third largest cat in the world. It resembles the leopard, but it’s larger. The distinction between the jaguar and the leopard is in the size and the shape of the rosettes. Jaguars are bigger and have larger rosettes. They also have rounder heads and shorter legs than leopards.

Jaguars live across forested lands as well as open terrains. They prefer tropical and subtropical dense forests, rivers, woods and swamps, where they can catch their prey. They also live in deserts and shrublands. This large cat is a solitary animal. It also enjoys swimming. It stalks and ambushes its prey and is an apex predator.

This cat is frequently killed by poachers, farmers and ranchers.

This animal is robust and muscular. Only the lion and the tiger are larger than this large cat. Their fur, which is yellow or reddish-brown, is covered with dark rosettes. This is a camouflage they use moving through the forest. They have individual spots. Usually the forest jaguars are smaller than the ones living in open areas.

Female jaguars are smaller than males. The size of both males and females differs depending on the habitat.

Jaguars have strong muscular legs, robust heads and powerful jaws. They could pierce the shell of turtles and armored reptiles.

Jaguars are animals which are at the top of the food chain and they don’t have natural predators in the wild.

Jaguar females are sexually mature by the age of two, and males by the age of three or four years. Births of their young usually occur when there is enough prey. After mating, the pairs separate, and the females are the ones which do all the parenting. Their pregnancy lasts around three or three and a half months. They usually give birth to two cubs, maximum four.

They don’t tolerate the presence of males near the cubs because they are afraid of the cubs being killed by the males. The cubs remain with their mother one or two years before becoming independent. The mother teaches them to hunt and take care of themselves. Young males are nomadic until they claim their own territory. 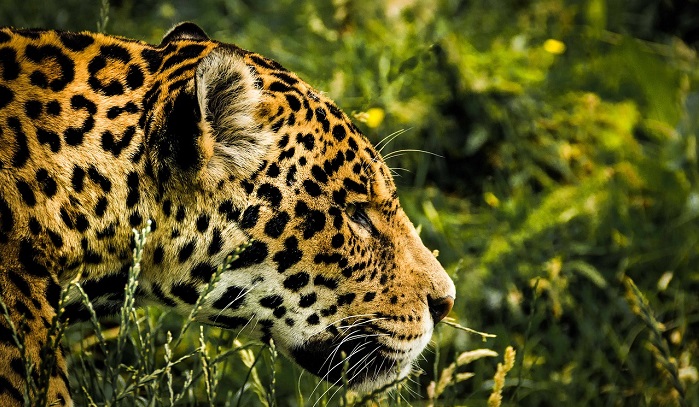 The jaguars usually live around 12 to 15 years, and up to 23 in captivity. Their life span is considered long.

Jaguars use different vocalizations to communicate. They roar to warn competitors. They also grunt and meow. They avoid aggressive behavior and rarely fight for mating rights. They usually confront over territory and they don’t tolerate other males intruding them.

They are most active at dawn and around dusk. Both males and females hunt, but males cross further distances in their hunt for prey. They are active animals, and spend more than half a day in activities. They are also shy and difficult to be seen.

Jaguars feed only on meat. They kill their prey by suffocating it or by biting its brain through the skull. They could kill any prey which they come across, except for large crocodiles. They sometimes behead their prey before they begin eating it. They sometimes attack domestic livestock. They also prey on black bears in territories where there are bears.

These cats rather stalk and ambush their prey, instead of chasing it. They approach slowly to their prey before striking at it. They are also able to leap inside the water when chasing their prey and are able to carry their kill while swimming. They often drag their prey to a secluded spot to eat it.

These animals rarely attack humans, but such attacks have increased over the time because humans tend to invade their habitats.

The major risks for the survival of jaguars are the loss of their habitat and competition for food with the humans. Due to their habit of attacking livestock, farmers don’t hesitate to kill these animals to protect their animals. It is illegal to trade jaguar skins and other body parts.

What does a Jaguar Symbolize?

The jaguar is a prominent figure in the mythology of many American cultures. The jaguar was a symbol of strength and power in the pre-Columbian South and Central America.

It was a sacred animal in many of their cultures. During religious rituals they performed, people were dressed in their skins.

The Maya civilization considered the jaguar an animal which enabled a communication between the living and the dead and it was considered a protector of the royalty.

The Aztecs also respected the jaguar and considered it as a symbol of rulers and warriors.

The Jaguar Meaning as a Spirit Animal

The jaguar totem can have many different meanings. Here are some of them:

Beauty. Jaguars are beautiful animals. This totem animal teaches you to appreciate beauty in all its forms, especially the beauty of nature. With this animal as your totem, you are most likely already a fan of nature and its wonders. You can also be a person with a beautiful appearance.

Communication. Jaguars communicate with each other with different sounds, from roaring, grunting, growling, to meowing. As totem animals, jaguars teach you of the importance of communicating with others, especially about your needs and desires. If the jaguar is your totem animal, you are most likely good at communicating and you can even be very sharp with your words, cutting through lies and deceits of other people.

Although there is nothing wrong with being truthful and honest, you should learn the skills of communicating properly and avoiding the risk of hurting someone’s feelings with your overly direct approach.

There are much subtler ways of telling the truth, and there’s no reason to upset the person you are talking to with your directness.

Isolation and solitude. Jaguars are loners. These are solitary animals who get together solely for the purpose of procreation, after which they part their ways. With this totem animal, this is most likely your trait as well. This trait sometimes represents a burden to you because you have the need and desire for intimate companionship, but you can’t seem to establish a committed relationship that easily.

The jaguar totem animal helps you overcome these barriers and open up to intimacy and sharing your life with someone special.

Confidence and leadership. Jaguars are confident animals. They should be because they don’t have any natural predators. This totem animal gives you this gift as well, teaching you to trust your abilities to achieve anything you want. If the jaguar is your totem, you are probably confident and people respect you for that.

You are considered a born leader and have many followers because you seem to trace the way for others.

The Jaguar as Your Totem Animal

If you have the jaguar as your totem, you are most likely a very passionate and confident person.

You also have a deeper knowing and understanding of life and things around you. You are brave and embrace changes with ease. You are also creative and intuitive and you allow your inner being to guide you on your life path.

The jaguar gives you a natural graceful attitude and beauty. The way you move and appear in public leaves people amazed with your appearance.

Regardless of how amazing you might look, you might have problems with social interactions and relationships with others because of your inborn solitary and aloof nature.

With the jaguar as your totem, your lesson might be to become more communicative and open to others.

You need to overcome the need for isolation, so you can enjoy a fulfilled and meaningful life in the company of other people.

What if a Jaguar Appears in Your Life?

The jaguar appears in our lives to remind us that it is time to finally deal with some old issues which are blocking our progress and movement forward in life.

This totem animal often reminds you to stop leading the solitary life you are leading and begin opening yourself to people.

Find some friends and go out more often. If you don’t have issues with your social life you might be having troubles finding a romantic partner and settling in a committed relationship.

The jaguar calls you to open your heart to love.

Sometimes a jaguar appears in our life to ask us to react fast in some situation to seize an important opportunity. If you see a jaguar, look around you.

Are there some opportunities you have been waiting for some time and you weren’t aware of them?

The jaguar could also be a reminder that it is time to work on developing your spirituality and your inborn psychic gifts.

When to call on Jaguar?

You should call on a jaguar as your spirit animal when:

Dreams about a Jaguar – Interpretation and Meaning

Black Panther (melanistic jaguar) in a dream symbolizes your spiritual power as well as your sensuality and sexual nature.

If you dreamed of a jaguar with spots, that could indicate your focus on some goal and confirms success of your endeavors.

This dream could also be a reminder to change your solitary nature and open up to friendship and love.

This dream could sometimes indicate your aggressiveness in some situation and the need to deal with these destructive emotions.