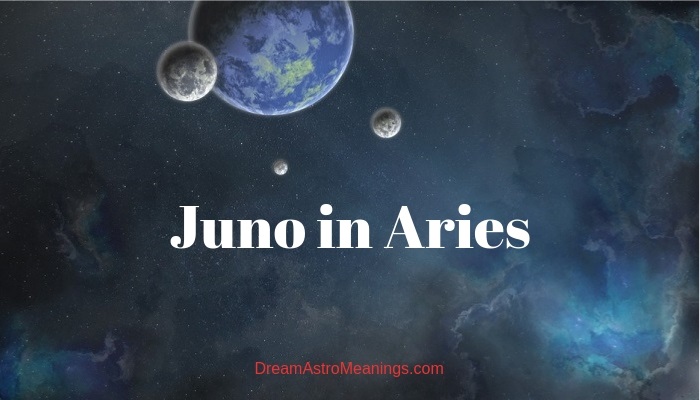 Juno is the third discovered asteroid. It was discovered in 1804 by the German astronomer, Karl Harding. Like the other asteroids which were discovered before, Juno was considered a planet before it was reclassified as an asteroid.

This asteroid is named after the ancient Roman goddess, Juno, the wife of the supreme ancient Roman god Jupiter. She was well-known for her incredible loyalty and devotion to her husband, although she was aware of his infidelity and many affairs.

Juno was the patron goddess of marriage, women’s sexuality, and childbirth.

She ruled the rites of marriage. She was considered an ideal wife and a model of what an ideal wife should be.  She was also the patron goddess of Rome and protector of the state.

In astrological terms, Juno symbolizes marriage, commitment, betrayal, relationships and partnerships which require balance and effort to maintain, infidelity, compromise, etc. This asteroid shows in which areas of our lives we try to balance things, and make them correct and fair.

This asteroid has Venus/Pluto, or Libra/Scorpio energy. Juno’s placement in our natal charts is an important spot, but it also shows where we have the potential for empowerment. Juno shows us how to make the most of all our connections.

It also indicates the area where we desire and need to be respected.

People who have a strong Juno in their charts can be prone to doing multiple things at once.

This asteroid is mostly connected with marriage unions and commitments, and describes the best potential partner we could end up with, in a long-term commitment. Juno in strong aspects with the partner’s chart can be a strong indication of a marriage relationship between these two.

Juno’s influence is very important for a relationship and marriage to take place. It is also prominently aspected between the charts of soulmates in most cases.

Although Juno was a devoted wife, she was constantly under the suspicion that her man was cheating on her and that is why her confidence was shaken.

This asteroid often indicates our tendencies for insecurity in our romantic relationships.

This asteroid can give us a precise picture of the future of our long-lasting relationships and marriages. It reveals the traits we need to recognize in a person in order to consider them a suitable match for a long-term relationship or marriage.

People usually base their choice of partners following the traits of their Mars and Venus signs, but these planets usually describe the attributes we look for to satisfy or romantic or physical needs, and not the traits we look for in a partner we are about to spend our lives with.

The asteroid Juno describes what you imagine your ideal partner to be.

It depicts in detail the person you can imagine yourself being with all your life, through sickness and in health, and regardless of all the potential circumstances you two could experience; that is a person who considers you fantastic just the way you are without the need to change anything about yourself, and you consider this person ideal just the way they are.

Juno describes your potential to wait and be patient. If you follow the clues Juno in your chart is giving you, there’s a little chance you can make mistakes in the choice of a long-term partner.

The people to whom we are attracted to the most don’t essentially make our ideal life partners.

That is where Juno says the final word. Juno helps us illuminate all the traits we desire in our ideal mate, that are not just romantic or passionate in nature.

Juno reveals our deep personal needs in a partner.

Understanding that can help improve an existing relationship or help you to recognize your ideal mate.

Men with Juno in Aries are often attracted to women with strong personalities.

A problem of leadership in the relationship could arise with this kind of partner because these people have the need to be the leaders in their relationships.

With Juno in bad aspects, especially to personal planets, these men could end up with an overly aggressive and dominant woman with whom conflicts and disagreements will be inevitable.

These men need to be very careful when choosing a long-term partner because they might end up in a relationship which could be unbearable and destined to end.

These men should try to look for and recognize partners who have enough confidence but also self-awareness and awareness of others.

These men need a partner who won’t resort to conflicts and arguments to get what they want but to a constructive dialogue where both parties will make a compromise and both get what they desire.

Women with Juno in Aries subconsciously desire a man who is confident and strong, and often a bit aggressive.

They often have an issue with authority figures, even if that authority is represented by their man.

These women love their independence and they want a man who exhibits similar traits. They often have leadership qualities and don’t like to be told by others what to do.

The problem arises when the man they subconsciously want begins exhibiting the same traits and tries to lead the way in their relationship.

This is something these women have a hard time accepting, yet unconsciously desiring a man with these qualities.

The main problem with these women is the fact that they try to undertake some masculine qualities and neglect their natural feminine qualities, and that makes them compete with their men instead of cooperate with them.

For these women to enjoy a lasting relationship they desire with the man who has qualities they desire, they need to work on their personality and begin accepting their feminine traits as something which is natural and beautiful about them.

When they manage to do that, their relationship with men will immediately change and the conflicts and competition will stop.

They will soon begin enjoying stable lasting relationships with the men they will respect and love for their strong and confident personalities.

Some of the good traits of Juno in Aries are: confidence, strength, independence, love for freedom, etc.

Some of the bad traits of Juno in Aries are: lack of tolerance, exaggerated desire for freedom and independence, domineering, demanding, competitive, conflicting, aggressiveness, etc.

Juno in Aries people usually have a great need for freedom and independence in their relationships.

They often have aggressive and moody reactions as a mechanism to express this great desire to be unrestricted by anything and anyone.

If they suppress these needs such behavior might lead them to illness, like headaches, or similar health issues. If they don’t live this Juno placement, these people might be prone to attracting aggressive and domineering partners in their lives.

They might be considered as very demanding and controlling by their partners. They do have a need to be the leaders in the partnerships and can feel bad if they need to fight for that role with their partner.

These people often choose some person of authority for their mate.

They sometimes consider their partner as competition and love competing with them. They need to learn how to establish balance in their relationships.

These people seek active partners who are often sports types and lead an organized and productive life.

They secretly desire to be pursued by this partner who will be very attracted to them as well.

If they don’t pay attention to their choice of partners they might easily end up in a relationship full of conflicts and arguments because these people do have a tendency of attracting aggressive and conflicting partners into their lives, which is partly due to their own character which often exhibits similar traits.

They need to work on building relationships where they will look for solutions alongside their partner through constructive and peaceful dialogue.

People with Juno in Aries are very independent and they sometimes exaggerate in exhibiting their need for freedom which makes them isolate themselves from other people.

These people are confident and often have dominant personalities, or they seek partners who exhibit these traits.

They have almost contradicting needs when it comes to partnerships.

On the one hand, they seek strong and confident partners who are often in a position of authority, and on the other hand they don’t want to be in any way restricted, which a relationship with such a partner certainly requires.

Juno in Aries people want a strong and confident partner, one they can rely on.

They are attracted to partners who are sports types, active and often stubborn. They want a partner who will pursue them until they become subdued to their charm.

In some cases, their relationships can turn out to be full of conflicts and arguments and they need to put in efforts into establishing balance and finding a way to find the right solutions through a constructive conflict and not ones which will destroy their relationship.

In some cases, these people might be perceived as very demanding and domineering in their relationships.

They need to work on developing and strengthening their cooperative skills and establishing balance and harmony in all their relationships especially lasting romantic partnerships or marriages.