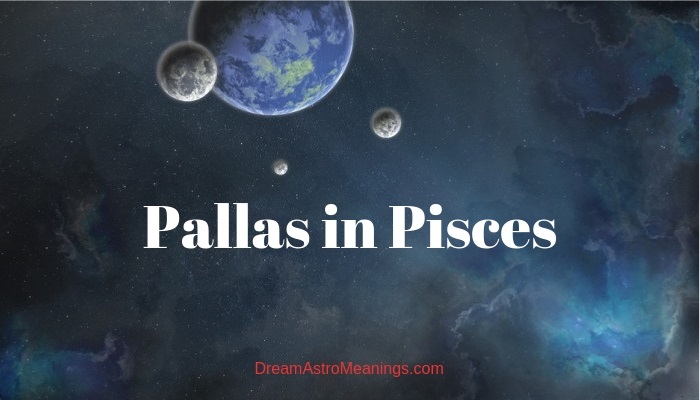 Pallas is an asteroid, discovered after the asteroid Ceres. It is one of the biggest existing asteroids in the Solar system. This asteroid was discovered in 1802. All asteroids were first considered planets, and it was later discovered that they are not. Pallas’s surface is generally composed of silicates.

The name of this asteroid came from the ancient Greek goddess Athena, goddess of wisdom and war.

Athena was the daughter of the god Zeus and is believed to be born from Zeus’s head. Her alternate name was Pallas, which Athena adopted after accidentally killing her friend Pallas whom she loved dearly.

In astrology, although not commonly used when interpreting natal birth charts, asteroids are very useful in illuminating a person’s character and their special talents and abilities. In general, asteroids in astrology symbolize the person’s feminine power.

It also indicates how capable we are to control and suppress our animalistic and aggressive urges applying our reasoning, wisdom and intelligence.

Pallas symbolizes men in our life (especially in women’s natal charts). It reveals how much we trust them, and it either makes us instinctively trust them, or it makes us suspicious of their motives.

This asteroid is considered the warrior queen. Pallas fights for her beliefs and fights for things she considers righteous. She carefully makes her decisions and thinks well before acts. She does her best to avoid aggressive behavior and uses her wit and intelligence for that.

Pallas can also indicate the person’s intuitive abilities, how perceptive and intelligent they are. This asteroid also indicates one’s ability to make strategic plans for achieving their goals.

Because Pallas is the ruler of arts as well, this asteroid is often prominently placed in the natal charts of artistically gifted people, or people doing some creative work for a living.

Often these are some kind of visual forms of art and creative endeavors, such as design, movies, architecture, painting, photography, pottery, sculpting, etc.

Pallas is also the healer asteroid, and gives people healing abilities. It rules different healing methods, especially the ones where the power of the mind is used or some other techniques in the process of healing others or self-healing.

Besides being able to heal others, some of the people influenced by Pallas have a predisposition to be healed in such a way.

The asteroid Pallas gives good diplomatic skills to people as well as talent for politics and diplomacy. People who don’t have good aspects of Pallas usually don’t have these skills, or they have a weak or aggressive personality.

Also prominent Pallas in a women’s chart might make her exhibit more of her masculine traits, and deny her female qualities.

That might cause her to behave overly aggressively, competitive and dominant, especially in relationships with men.

This asteroid in our natal chart describes the way we handle the issues arising regarding our creativity or our diplomatic skills, issues arising in our relationships, or the way we deal with the fear of success.

Men with Pallas in Pisces are usually very spiritual beings.

They are often gifted psychic with strong healing abilities.

They use different methods for healing their patients, such as healing with visualizations, guided meditations, prayers, aura reading and cleansing, etc.

These men often have extrasensory perception, and possess gifts to see into the future, such as clairaudience, clairsentience, claircognizance, etc.

These people are often lightworkers with a mission to raise people’s consciousness about the importance of spiritual evolvement.

They are sincerely concerned for the wellbeing of all humanity and are often in some kind of non-violent protest against human rights restrictions, as well as the global destruction of our environment.

Women with Pallas in Pisces have similar traits as men born with this Pallas placement.

They are kind and humane beings, sincerely concerned with the wellbeing of all living beings.

They are often very spiritual and have strong psychic powers, which they use to heal and help others, but also to help themselves.

These women are usually very creative and artistically gifted and are often talented poets.

They are non-conflicting personalities and they don’t answer back when insulted or attacked.

One of the major issues these people might experience is due to their lack of response to attacks and violence.

They might be prone to attacks by people who are not on that level of consciousness who might consider them weak and provoked to attack them and pick on them.

People with Pallas in Pisces often have a gift to communicate and connect to “other realms” which are not visible and not known to most people.

They are often gifted with various psychic gifts, such as clairvoyance, claircognizance, clairsentience, clairaudience, psychic surgery, aura reading, and others.

This person is often able to heal people just by using the power of vision and prayers.

People with Pallas in Pisces also have an ability to heal people through guided meditations, fantasies, visualizations, and similar methods.

These people are inspired artists and able to create amazing works of art.

They also have other creative skills, such as photography, creating electric music, and other similar skills.

Their creations are able to provoke special mental states in the minds of their observers.

Pallas in Pisces people are often promoting non-violent resistance. They refuse to involve in conflicts and are often the people who will turn the other cheek.

These people are often martyrs and lightworkers. They have a deep understanding and compassion for the sufferings of people and the planet in general.

They often have great poetic talent.

People with Pallas in Pisces are kind and gentle beings.

They are humane and care about the wellbeing of all beings on the planet and the planet Earth itself.

They are non-conflicting personalities who avoid conflicts at any cost, and for that reason might be the target of people with a lower degree of consciousness who are inspired to attack them because they perceive their behavior as a weakness.

These people often possess superb healing abilities and use them to help people.

They are usually very creative and artistically talented.