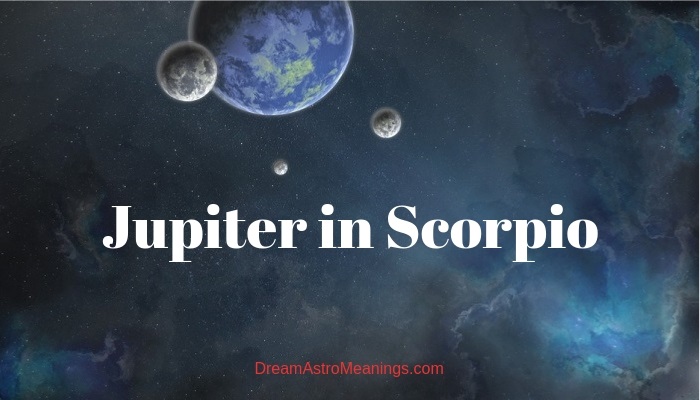 Jupiter is a giant planet, the biggest in our Solar system. This is a planet with a mass bigger than the mass of all other planets combined. It doesn’t have a solid surface and its composition is mostly hydrogen.

Jupiter got its name from the Roman god of thunder, Jupiter. This god is an equivalent of the Greek god Zeus.

It was the chief deity in the ancient Romans pantheon of gods and was considered the king of all gods. It remained on that throne until the rise of Christianity, and its declaration as the main religion of the Roman Empire.

Astrologically, the planet Jupiter is considered a very beneficial planet, and has had that label since antiquity. This planet is often called “the great benefic”.

It is the bringer of good fortune and prosperous opportunities into people’s lives. Jupiter is the planet of exaggeration as well as increase. It tends to magnify the things it rules over.

This planet is the most powerful when it is in the signs it rules over, Sagittarius and Pisces. It is also very potent in the sign of its exaltation, Cancer.

In general, Jupiter almost never has a bad influence, unless it is severely badly placed in a person’s natal chart. Even in these cases, it usually manifests as a lack of good luck or fortunate opportunities for progress and increase.

If it is well placed in a natal chart, it blesses a person with good fortune and the benefits of life. This planet is the protector of our lives, enabling us with a breakthrough in a time of despair and confusion.

People who have Jupiter in a prominent natal house and in beneficial aspects to the other planets in a person’s chart, especially the Sun, Moon, Venus or Pluto, usually are wealthy and lucky.

These people are often protected from life’s potential harms and calamities. They usually don’t have any financial problems and have a bunch of opportunities to increase their material wealth even more.

Unlike the personal planets the Sun, Moon, Venus, Mars, and Mercury, Jupiter is a social planet, which means that it influences whole generations of people while transiting through a sign. The reason is its long stay in one sign, around one year, during which it has an impact of a generation of people born within that year.

It is not that it doesn’t influence individuals through the sign it goes through, it is just that its influence on a person should be observed as a combination of the sign it is in, its natal chart house placement, as well as its aspects with other planets.

Personal planets, on the other hand, go through a sign in a shorter amount of time, and have a strong influence on people’s characters.

In this text, we are talking about the traits of people born with Jupiter in Scorpio.

Men with Jupiter in Scorpio often have a secretive nature and are very sensitive to nosy people, who are trying to discover their secrets, or at least details from their privacy they want to keep to themselves. They are drawn towards spiritual disciplines and the occult.

These men often possess some psychic and healing powers and use them to help others, but they often make a living doing them as well. They are often horoscope and tarot readers, crystal healing therapists, magicians, etc.

These men can be very good in professions where they deal with other people’s money. Whether it is tax payment and inspection, or investing their partner’s money, they seem to be very fortunate and have excellent opportunities to benefit from these occupations.

Many of these men end up as successful detectives or private investigators with a great rate of successfully solved cases.

Women with Jupiter in Scorpio usually have a mysterious and secretive nature. They have a gift of discovering other people’s secrets, but they also tend to keep their secrets to themselves.

In some cases, they could become obsessed with the possibility of someone discovering their secrets, and undertaking severe measures to protect them.

These women are often interested in mysticism and the occult. They often have a great knowledge of these subjects, and in most cases actively apply that knowledge.

Many of them practice some spiritual disciplines, such as tarot reading, or astrology readings, and they earn their living doing these things. Many of these women have a natural ability to look into the future, and use this gift they have to help people, but also to earn money.

They often possess healing powers and use them to heal people and earn money while helping them. Not all people with Jupiter in Scorpio possess these abilities, but many of them do.

They are very good at managing other people’s money. These women often experience financial gains through someone’s death or their job is somehow related to death and dying.

Some of the bad traits of Jupiter in Scorpio are: secretive, prone to illegal activities, deceit and cheating for money, criminal acts, manipulative, jealous, controlling, etc.

Jupiter in Scorpio accentuates the traits of this sign. Scorpio is a sign which rules secret and occult powers, as well as one’s physical attractiveness.

In general, Scorpio symbolizes death and matters related to death, such as cemeteries, funerals, cremation, crematories, embalmers, and embalming, etc.

People with Jupiter in Scorpio are very discerning and have a natural ability to judge people’s characters and see through their intentions.

They often incline towards professions which include a dose of secrecy and elements from other realms. They are often highly intuitive and have psychic abilities. These people have intense feelings and reactions, and are very energetic.

When it comes to money affairs, these people have a natural gift of dealing with it, especially in regards to dealing with other people’s money. They are often attracted to the insurance business and have great results.

Many of them are able to earn substantial amounts of money selling and promoting insurance policies. These people have a talent for dealing with finances in general.

They can be very secretive, especially about their privacy. They also have a tendency of gathering different information about others in case they need it in the future.

They are attracted to power and some of them are willing to go through great lengths to obtain it, some even using immoral or prohibited means, especially when Jupiter is badly placed in their natal chart.

In these cases, they can be prone to gaining money through different kinds of illegal activities. With badly placed Jupiter, these people could become overly jealous, paranoid, manipulative, vengeful, etc.

These people are usually physically attractive to other people.

They seem to have a certain magnetism which pulls people towards them. They are usually very spiritual beings and often choose professions such as spiritual healers, counselors, magicians, astrology and tarot readers, etc.

Many of these people have an ability to see beyond tomorrow and they use their gifts to help people as well as to make a living out of these gifts. They sometimes manage to earn a substantial amount of money by doing these services.

Their readings are mostly a product of genuine talent and ability to look into the future, but some of them with badly placed Jupiter, especially in combination with Mercury and Neptune could be prone to deceit and cheating people for financial gains.

They are often interested in the occult, mysticism, magic, and other similar fields. They often become masters in these areas and members of societies which are dealing with these areas.

Having Jupiter in the sign of Scorpio, these people usually have support and opportunities to progress in these areas and even gain substantial financial rewards.

In some cases, with badly placed Jupiter in this sign, these people could become overly secretive and even paranoid about others discovering their private matters. Such Jupiter could also indicate possible scandals regarding the revealing of personal information these people might experience.

These people don’t just keep secrets they have an ability to discover secrets.

They often choose professions such as private investigators and detectives, where they can use the full potential of their abilities. In some cases, usually when Jupiter is badly placed, their work can be related to dangerous situations, putting their lives in jeopardy.

The sign of Scorpio makes these people successful surgeons, dentists, as well as pharmacists.

They have a gift for medicine in general and often earn their livings these occupations. They are also good in professions related to taxes and collecting taxes, tax inspection, jobs in financial institutions, etc.

It sounds morbid for sure, but these people often earn their living and some manage to earn substantial amounts of money through death related businesses. They are often in the undertaking business, as headstone manufacturers, cemetery workers, owners of burial agencies, owners of crematoriums and embalmers, etc.

The sign of Scorpio makes these people somehow indifferent to the idea of death and dying and that is one of the main reasons for their success in this business. In some cases, this placement of Jupiter could indicate gaining money from someone’s death, like inheritance or something similar.

They often have luck in dealing with other people’s money, especially with their partner’s money. They often have fortunate opportunities to invest it and earn a great deal of income.

In general, Jupiter in Scorpio will provide the individual with prosperous opportunities and good fortune in all Scorpio ruled areas.

Jupiter transits through one sign in around one year. During that transit it influences all people born within that year who share the same traits.

Because of that fact, when determining its influence on a particular individual, besides its sign, it is essential to take into consideration the house it occupies, as well as the aspects it is making with other planets.

People who have natal Jupiter in Scorpio share the trait of secretiveness and tendency to almost obsessively hiding their privacy.

At the same time, these people have a desire and ability to discover other people’s secrets and are very successful in professions where such skills are required. They are successful private detectives and investigators.

Many of these people have supernatural abilities and gifts. They are often able to look into the future, and make a living doing it.

They can also possess natural healing abilities and use them to help people as well as earn money through that.

They have a natural inclination towards medicine, and many of them are successful dentists, surgeons, medical technicians, laboratory technicians, or pharmacists.

Because the sign of Scorpio rules death and all death-related matters, these people often achieve success in occupations somehow related to death and dying, such as undertakers, embalmers, cremators, tombstone makers or dealers, etc.

These people are usually successful in all Scorpio related areas and professions. In these areas, Jupiter provides them with good luck and fortunate opportunities to succeed and be well financially rewarded.