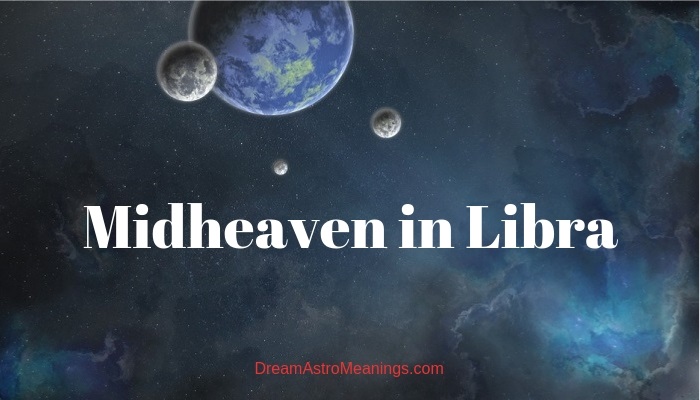 Midheaven or medium Coeli (MC) in Libra indicates a personality with a strong power of imagination and creativity that could be both used in professional area of life.

People with Midheaven in Libra are talented for art and they usually make wonderful results in the field.

They could apply their artistic and imaginative skills and talents in professions that are not primarily from the sphere of art industry. They turn everything else into art, instead.

Libra Midheaven is a very good combination because it offers one a possibility to enjoy any kind of job; these people give it an artistic touch and make their working environment amusing and comfortable enough, so they feel relaxed and good about what they are doing.

Immum Coeli, the Lower Midheaven for Midheaven in Libra is in Aries. This indicates rebellious attitude towards one’s family and unwillingness to make compromises.

Before we get into details about the Midheaven in Libra, its good and bad sides and else, we would like to introduce you to astrological parameters such as the Midheaven and the Tenth hose, which is closely related to it.

Let us find out what they represent and how they affect one’s birth chart and astrological destiny. To begin with, let us talk about the Midheaven.

Midheaven or Medium Coeli is the highest point on the astrological ecliptic, located at the top of the Tenth house, in most of astrological systems. When people talk about horoscope in common, everyday conversation, rarely one ever mentions the Midheaven.

In fact, we are sure some of us hear about it for the first time. Astrological analyses are complex and they feature many elements to consider and interpret.

Midheaven is not about your personal qualities, in terms of your personality traits, temperament and character that much. It is more about the impression you make to the public eye.

This astrological point or angle is closely related to one’s professional talents, their attitude towards career, business, work and authorities. The one of the opposite quality is Immum Coeli or the Lower Midheaven that represents one’s privacy and intimate aspirations.

Midheaven represents the shortest and the best road to one’s success and public recognition. It also tells about what things we should avoid and what behavior we should control, if we are to succeed.

In a way, Midheaven defines our own vision of success; that is why different people find satisfaction in completely different things. One is not satisfied by gilded halls, while the other feels his or hers life is fulfilled with much less.

It is also about parental heritage and expectations our parents have from us.

It is closely related to one’s career path. A good example is a successful family of lawyers who would like they child follow their path.

It is about the impression we make in the public, especially in terms of profession and career.

It is interesting to note that MC often tells about our earliest ideas of success. It reflects our ideas of what we would like to be once we grow up. It is about our childish drams and ideals; it could happen these ideas revive with time and we actually follow that initial path. It all depends on many other factor is a birth chart.

It is of essential importance to know that all of this means almost nothing, if you do not use MC information properly.

For the greatest part, it is you who decide about your success. MC reveals your potentials, hidden talents, directs you towards practical and useful paths, in order to support your career development, but it does not make final decision.

It is precious to know more about your capacities and opportunities, as well as about flaws and things to avoid, in order to express your Midheaven potential to the fullest.

Medium Coeli is closely related to the Tenth astrological house, being the cusp of it. The Tenth house is considered very important in analysis of a personalized natal chart. It is the house of work, success, fame and legacy.

The Tenth house is considered one of the most important houses, along with the first, the fourth and the seventh. It also represents social status and the attitude towards authority.

The Tenth house is about career, life goals and the realization of those. It is also good to know that the Tenth house is identified with the sign of Capricorn and with the planet Saturn, which symbolically represents the desire for power and control.

Capricorn stands for ambition and the strong will directed towards achieving professional success.

This astrological field shows how ambitious is the person whose birth chart is being analyzed. It is associated with high social and professional positions. IT represents our reputation, authority, our public recognition, acknowledgments of our success, respect we earn by our own doing and the impression we leave on people, in professional sense, in the first place.

It is about who we might become, but it is up to us to follow the path given and achieve great things. It should be carefully analyzed.

It is not only about medium Coeli, but also about other elements, such as planets located in our Tenth hose. They could create favorable or troublesome aspects that could prevent us from achieving our full potentials. It is of vital importance to know about those, so that we can take the best of it and also to avoid possible dangers.

Everything that is related to our image in the public, larger or smaller audience, depending on our position in global community, is inscribed into one’s Tenth house. Midheaven could direct you towards doing things that seem irrelevant for your success and, yet, they could be the defining deeds.

The Tenth house is all about fame, regardless of its type. It is about glory and respect, but also about one’s notorious reputation.

As we have said, the Midheaven is, in a way, parental heritage. The Tenth house represents the first authorities we encounter and those are our parents.

Depending on aspects, such figures become glorified and worshiped, but also feared off and despised by many.

Midheaven in Libra – Love over Fame

Let us now talk about the Midheaven in Libra. This combination is interesting, considering that the Libra sign is not of the most ambitious ones by nature; signs like Aries, Taurus, Leo, Virgo, Scorpio, and of course Capricorn.

Midheaven Libras, however, possess one amazing talent and it is their artistic nature.

They have ability to make any job artistic and creative and so they could enjoy doing it. They are not obsessed with public recognition and being glorified.

Since Midheaven Libras are not of that ambitious nature and do not die for being famed and glorified, they usually stick to their romantic partner. It is very common that their name is mentioned along with that of their partner.

Their reputation is commonly identified with that of their partner, before they gather enough motivation or courage to demand public recognition solely for themselves. They want rather to be publically accepted than worshiped.

Midheaven Libras are charming, helpful, understanding and reasonable people and they want to be loved rather than admired. They enjoy sharing with people and their attitude is relaxed and easy-going.

There is a certain attractiveness in their friendly attitude; they sometimes become famous without every wanting it. The community usually knows them for their artistic work or their contribution.

They have gift for diplomatic work; Midheaven Libras could become successful diplomats, foreign advisors, humanitarians and else.

They could also become oriented solely towards their artistic side and actually to work in the field of art industry. They are not performers who dream of the spotlight, like Leos, but they want to show this world the beauty, as an ideal. Midheaven Libras could make people see beauty in things many usually throw away as unworthy. This is the magic of Midheaven Libras.

When it comes to work and career as it is, Libra Midheaven people are not particularly competitive and they are open to compromises. It does not mean they do not stand for themselves and defend their integrity; they do, but are thoughtful, tolerant and ready to hear the other side.

They are excellent team members, but they always give their final artistic touch to a shared project. In the most cases, everybody likes it.

Speaking about positive sides of having the Midheaven in Libra, there are indeed many. Their friendliness, sociability and tolerance make them easily accepted and likable people, which is exactly the kind of reputation they want for themselves.

For Midheaven Libras, it is more important that people like you than o be on top of everything.

They are gifted for diplomatic work and humanitarian professions. They are artistic, highly imaginative and creative.

The imagination Midheaven Libras possess makes them possible to bring into the realization all sorts of projects; it does not have to be an artistic career at all.

However, their artistic potential is easily applied in any career path they choose.

They emphasize beauty in everything and could literally make something out of nothing. People consider them approachable, cooperative and pleasant to work with.

Perhaps the worst part of having the Midheaven in Libra is the lack of ambition and indecisiveness, ‘traditionally’ ascribed to the sign of Libra. It happens that they stay in the shadow of someone else from their life, most likely their romantic partner.

Since they themselves do not strive for golden pedestals, it could happen that they get used to such position and simply live with it.

If it suits them, its fine, but it could cost the world one amazingly creative contributor.

Since Venus is the ruler of Libra, these people could become popular because of love affairs and romantic scandals, along or even before they are recognized for their talents. It does not always have to be negative publicity, of course, but it is completely out of focus considering their artistic potentials.

However, sometimes it is the road for them actually to become acknowledged for their success on other fields.

Larger audience commonly likes people with Midheaven in Libra; they do not dream of being globally popular and glorified for their actual talents and work, but for their benevolent, charming nature.

It often happens they perfectly combine the two, if aspects in their natal charts are favorable.

Midheaven Libras are people of amazing artistic and diplomatic potentials in the first place. As we have said, their power of imagination and creativity is so great that it could be applied in any occupation they choose.

Moreover, they use it in other areas of life, as well. They easily maintain good reputation.