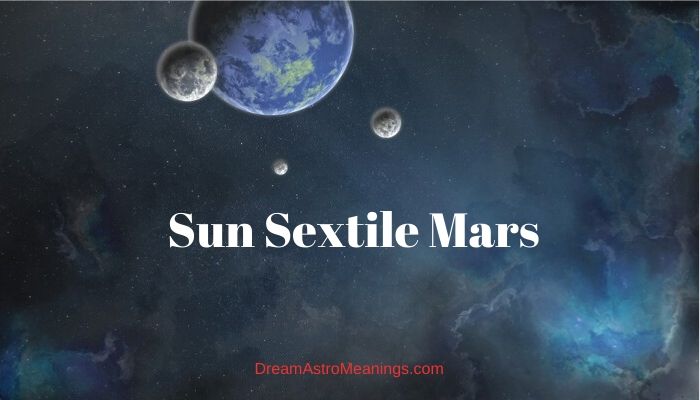 How Sun sextile Mars aspect reflects in one’s natal chart? What kind of personalities are people born with such an aspects?

The Sun and Mars are extremely powerful planets, if we look into astrology. The glorious, golden Sun has always represented the life itself, the active force and power.

The Sun is a masculine principle, associated with success, authority, vitality, life energy and life goals. It is the ruler of all planets, although itself not a planet, but a star.

The brightest and the closest one to our earth, though.

The Sun in Astrology

The Sun tells about the strength of a character, of one’s organizational skills, ambitions, dreams and goals. It reveals one’s advantages, one’s self-integrity, self-confidence and inner strength.

The position of the Sun in one’s natal chart tells about the level of one’s ambitiousness and his or hers need for fame, need to be recognized, praised, admired and adored.

It is associated with career and profession. It is the light of our life, along with the other one, the Moon. The Sun and the Moon both tell much about one’s health. The Sun is associated with the heart and blood flow. In the birth chart, the Sun represents the following qualities.

The Sun represents emperors, kings, rulers, knights, judges and all those who strive for recognition, glory and success.

Mars is also a powerful principle. Associated with the ancient deity of war, one cannot mistake Mars for any other principle.

It is a planet that is associated with great power and success, but it also carries troubles and conflicts within its vibration.

On a sentimental plan, it often represents rivals, while on a social plan it stands for competitors.

Mars stands for your energy, physical strength, physical efforts, our level of endurance and our impulsiveness. Mars is associated with wrath, anger, conflict, competition.

Mars is a warrior in us; the place of the planet Mars in one’s birth chart tells about that person’s way of dealing with their destiny, in terms of active struggle. It represents raw energy we use to achieve our place below the sun.

Mars is our effort, our armory and our inner force. It stands for our courage and our daring spirit.

Associated with Ares, the god of war, who is Mars in the Roman pantheon, the planet is explicit in its vibration, if we look for it in astrology.

Being a planet of such a strong and quite raw energy, Mars also represents risk, danger, injuries and even death.

However, it usually strengthens the body part that matches its position in a natal chart of an individual. Mars is a sign of warriors, fighters, those who do not give up.

Sextile is the angel of the planets distance from one another, that of 60 degrees. Each aspect has its characteristics and it affects the connection and relations of planets involved.

The sextile is a positive aspect. It manifests through harmonious, compatible, balanced relation.

This aspect represents talents and skills and individual possesses within the field of that individual’s personal interests and activity.

The sextile aspect stands for one’s talents, the manner of expression and skills. This aspect supports stimulation of planetary energies, so it contributes to one’s development of inborn skills and talents.

It supports creativity and creative expression. It contributes to overall individual’s energy. It improves activity.

The nature of sextile aspect manifests in good organizational skills of an individual, his or hers dynamics and inner balance.

The sextile is a positive aspect that helps one to overcome limitations, cast away negative thoughts and pessimistic attitude and it helps one in recognizing good opportunities, in any area of life.

The sextile could be understood as an aspect of the emotional and physical harmony and balance. In astrology, the sextile represents ultimately positive characteristics.

Let us now figure out how Sun sextile Mars affects one’s personality; how this aspect reflects in a natal chart.

People who have strong connection between these two powerful astrological planets are usually people who are ambitious, who know what they want in life or, at least, they know that they want something big.

We speak about the Sun as a planet, because all the heavenly bodies considered in astrology are called planets.

People who have a strong relation between the Sun and the planet Mars, the true-self and their active self are naturally individuals of a daring spirits, those who would gladly accept a challenge and bravely fight for what they hold important.

These people have an inborn need to compete, to fight for their goals, to achieve, actively to go through the life.

Although this characteristic might be associated with forcefulness and aggression, the truth is that Sun sextile Mars people are usually individuals others admire and respect.

They are rarely seen as brutish or too imposing, because their active approach and their self-confident attitude, in combination with competitive spirit simply come from within and are sincere.

These people are optimists and they do not see to harm others; it is neither their desire, nor their mean of success.

They are people who inspire others and make others see positive life energy in them. Their vivacious spirit would make others smile, not feel attacked or threatened by such a tremendously strong and bold spirit that characterizes Sun sextile Mars people.

In addition, people with this aspect are commonly in extremely good physical shape, healthy and vital.

One thing is especially important to mention about Sun sextile Mars individuals and also very interesting.

Although both the Sun and Mars are planets loaded with energy, both associated with force, ambitions, high goals, competitiveness and activity, people with this aspect are not actually that combative, as it might appear.

In other words, they are not violent, aggressive individuals. They are perfectly capable of channeling the incredible amount of energy, along with these other traits mentioned, into something productive and harmless.

They usually enjoy sports, are adventurous people. What is also very important to note is that they are not guided by Machiavellian type of ideals.

Their good aspects help them find balance between their will, represented by the Sun, and their desires, impulses, seen in Mars.

People with the Sun sextile Mars in their natal charts are competitive, but they are honorable, they are fair players. They hate breaking the rules and do not look with an approving eye on those who do.

Their reputation and honor are extremely important to them. However, the Sun sextile Mars is an easy and positive aspect, so they do not die to have just any kind of attention, such as notoriety.

No, they want to be knows and to be admired by their good deeds and fair play.

If you wonder what could make a Sun sextile Moon person to go mad, it is exactly the unfair play, trickery, guile. They themselves are people of strong individuality, self-confident, not easily manipulated.

They are very self-aware and it is not likely one would seduce them in order to achieve some personal goals. They hate unfair business; they despise those who use trickery and fraud to get to their goals.

One may wonder how this aspect manifests in children. It is a positive aspect, just as we have mentioned. With Sun sextile Mars aspect, the will and the desire are in perfect balance.

Therefore, it would be the best to nurture this balance in kids for an early age. It is a true gift to have.

With such a positive and a harmonious aspect, a kid could develop without difficulties in terms of relations with other children, with adults, teachers, professors later in life and so on.

In other words, this is an aspect that has a great potential to make a child’s life pleasant, full of joys, with developed responsibility and the sense of what is good and what is not, in some general terms.

You should not force them; just direct their inborn energy, which is in itself a very positive one.

It is very likely that a kid with such an aspect would be an active, playful child, interested in sports, outdoor activities of any sort.

A child with this aspect would probably be very open and direct in expressing their thoughts and emotions; also, the creativity could be tremendous with such a child.

The only thing one should be aware of as a parent is that incredible amount of energy. Direct your kid towards positive activities and measured speech.

What is also an interesting characteristic of a kid with Sun sextile Mars aspect is that this little one could be self-confident as an adult person.

It is because people with this aspect simply have an inborn sense of self-importance and in a good way. Such a kid would never be a class bully, but a class leader, one to inspire other ones.

Parents should always support such a gift in their child. They should not force the kid to a specific career, but they should nurture the kid’s good sense of relations with others and the positive attitude.