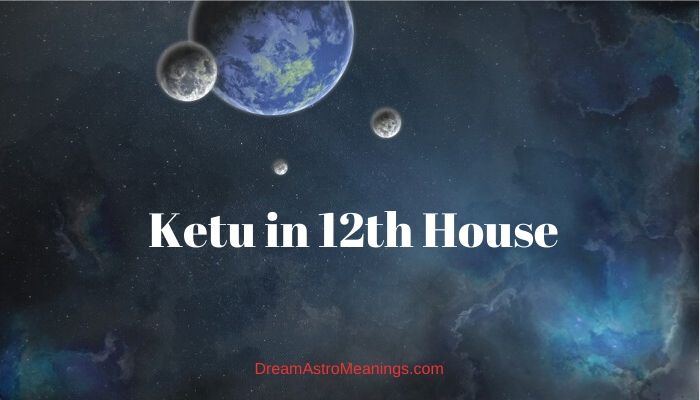 Lunar Nodes, Rahu and Ketu, are very important part of the Hindu astrological system known as Jyotish, which means ‘light’ or, better to say, divine light.

Jyotish is a very ancient astrological system, considered more precise than any other we know. Jyotish is not simply a way to read your destiny from the stars. It is more of a personal life path. It offers us solutions to achieve our karmic voyage and reach the light.

Everything is predestined, karmic astrology suggests. However, through the power of free will, we could affect our astrological destiny. We do not know everything about it.

In fact, we know very little about it, so all our activities appear as our direct influence. That is, perhaps the greatest power of our karma.

Astrological readings and systems could help us better understand who we are as individuals and what is our place in this life.

Rahu and Ketu are also known as the North and the South Lunar Node. They are not planets, although astrological readings treat them as such. They are believed to have a more powerful influence over an individual’s destiny than the planets have.

Rahu and Ketu are taken as imaginary planets and they are very important indicators of one’s karmic journey. Rahu and Ketu are, astronomically, points at which the Sun and the Moon orbs cross.

They are opposite tone another, but they are both considered malefic. In simplified approaches, Rahu is taken as a positive one and Ketu as a negative. That is not entirely true, because these astrological elements are quite complex.

Some authors would tell that Rahu represents what we should eventually become and that Ketu stands for what we should overcome. The actual goal is to find balance between the two.

Rahu and Ketu are not analog to any of the zodiac signs, but astrologers sometimes describe their nature as similar to energies of planets Neptune and Uranus.

Ketu or the South Node is one of the crucial terms in Vedic astrology. It represents ourselves the way we are and it is associated with our over developed traits. Ketu is like a bag full of learnt experience from previous incarnations.

It drives us backwards, because we are all very likely to choose the path we already know, instead of trying a new one, afraid of uncertainty in life. However, Ketu would still lead us towards our karmic change.

Ketu is like a comfort zone, regardless of what we find in that zone. In order to grow and progress, we have to leave many things behind, which is always the hardest part of the journey. We cannot interpret position of the South Node alone.

Both North and the South Node are part of our karmic journey. In fact, they are the greatest indicators of the nature of our karmic road.

Just like other elements found in a natal chart, Ketu could be favorably positioned or not.

Although people simplify things and take Ketu as a negative entity, that is not entirely true.

In good position, Ketu leads to spiritual potential, especially regarding healing powers. In bad place, however, it leads to depression, insecurity and disorder.

The Twelfth House, the last astrological field, is the house of mysteries and secrets. It is associated with enmity, especially with covert enmity.

The Twelfth House is a highly spiritual house astrologers associate with everything abstract, invisible, elusive, dreamy, intuitive, mystical, sub-conscious and unconscious, imaginative. The Twelfth house is the house of illusion and of self-deception, as well.

This is also the field associated with self-destruction, with lost things and losses in general, with debts and poverty.

This is the house of isolation and seclusion, associated with corresponding places, such as monasteries, jails, hospitals and it is also connected to with all other places that limit our movement and are away from the regular life.

The Twelfth House is the field of imagination and creation, artistic talent and idealism. Metaphysical approach to life is also associated with this mysterious field.

This field is of great importance because it is also the house of our karmic experience and karmic journey. The Twelfth House represents secret affairs, hidden weaknesses, but also the hidden strength of an individual.

The Twelfth House is analog the sign of Pisces, being a cadent and a Water House. This is the house of mystery, secrets and karma. Let us see how karmic nodes affect the twelfth field.

Ketu in the Twelfth House – Ketu in 12th House

People who have Ketu in the Twelfth House and Rahu in the Sixth House spend most of the time in their own thoughts.

They enjoy being alone and they do not need others to disturb their moments of peace, needed in order to go through all the memories of previous incarnations. This person is focused on the karmic memory.

This is a very complex and solitary personality. This individual does not choose isolation because he or she hates company.

That is not the case, but the truth is that this native is a profound thinker who often gets drowned in the ocean of his or her own thoughts and gets lost in its depths.

This native begins the journey under the surface using reason and logic, trying to uncover the secrets of its karmic destiny, but he or she always ends up at the point where all the logic appears, paradoxically, an illusion.

The Neptunian delicacy of the depths this native reaches keeps them endlessly mysterious.

This person lives in the world of ideas, impressions, thoughts and emotions that cannot be stabilized, because the native does not let others help them find a solid ground.

The result could be very disturbing. The person piles up fears from previous incarnations, having no idea whether they were real or imagined.

The base of the current life is build up on fears and imagination, regardless of the rest of the native’s horoscope. This person cannot resist the vortex of previous lives’ memories, unable to distinct imagination from reality.

The person does not know if there was an actual reason to feel anxious or it was all imagination. The native lives non-existing scenarios.

Ketu in 12thHouse – Down the Rabbit Hole

People close to this person feel his or hers fear and overall energy. They see how this native is trying to avoid every touch with the reality; he or she does that instinctively. It is automatic mechanism.

This person observes others all the time, only to conclude that the rest of the world looks at him or her with a curious eye. They feel as if they were on the other side of a mirror.

Such a position of lunar Nodes could induce paranoia; the native worries about others observing him or her and wonders if there was some intention behind it. This person rarely feels self-confident and stable, even those who appear to be so on the outside.

This is a very strong nodes’ position and it could be an especially inconvenient karmic lesson.

In the professional life, this native is unbelievably chaotic and disorganized. He or she often leaves business unfinished and easily gives up their goals. These people have a sense that there is never enough time to finish all the business.

The problem comes from very bad time management. The root of this problem is native’s inability to get in touch with reality and, even more, to stay in touch with it.

This person is like the White rabbit from the Alice in Wonderland. These people feel as if time is constantly running out and so they always rush somewhere, ending up being late again and again. They know order and limits, so those would be a part of their karmic lesson.

During some periods in their life, they would very likely have to deal with situations and institutions that would limit their roads, such as certain organizations, hospitals or so.

The greatest karmic lesson for this native is to learn responsibility, instead of crying about all the things he or she has failed to accomplish. This is an extremely sensitive native, prone to crying over imaginary problems and fantasized injuries.

This native is almost totally turned towards the inner world, except for anxious observation of the people around, in whose eyes he or she sees malevolent curiosity. This native creates his or hers own personal inner darkness.

This is the native very difficult to deal with. The person ready to help this one and drives him or her out of the darkness would face all kinds of complaints, cries and worries this vulnerable native carries throughout the incarnations.

However, these have to be curbed. In addition, this native is a bottomless source of anxiety, hopeless, without any faith that things could turn out fine. The problem is that the native trusts nobody.

The other great karmic lesson is trust. In order to leave their inner cave of darkness, these natives have to stop being suspicious about everything and everyone. They should start trusting people. It requires effort and a lot of work and it will be a slow process.

However, once these natives realize most of people do not wish them any harm, they feel relieved and more self-confident.

This process will turn them into some of the most compassionate, kind and supportive personalities within Zodiac.

North Node in the Sixth House helps them find great pleasure in helping other people; others’ content and benefit would become their greatest satisfaction. The key is to accept the life of self-sacrifice. This person is actually born to be a healer.

However, it all needs a fuel, in order to work. The secret fuel to this new role is faith, something the native has lacked, always turned towards the dark and disturbing depths of confused memories and heritage of fear and worries from the past.

Finding faith is probably the greatest, the most magnificent and the hardest part of anyone’s life. For a Twelfth House Ketu person, it will be the ultimate karmic lesson and, we daresay, karmic gift.

It is very likely that this native would spend much time nurturing others and taking care about the loved ones.

Physical illnesses and mental disorders would very likely be a part of this native’s life. They would have to face their own problems or problems of people very close to them.

The greatest achievement for these natives will be the realization that all the illness and disorder are a result of a disharmony, that mental imbalance is in close relation to physical disorders.

Many of these natives often surprise doctors, as their physical illnesses miraculously disappear, which actually comes as a result of their karmic awakening. The faith is the ultimate cure.

Once the native realizes what power lies within their faith, he or she becomes an initiator of the most positive approach to life.

Others will easily recognize and enjoy their transformation from pessimistic view on life to new, fresh, faithful and positive approach.

The native stops criticizing everyone and everything, relieved of the former paranoia and anxiety. He or she now trusts people and, above all else, this native finally starts believing into their own competence and value.

The South Node in the Twelfth House has finished its karmic path; some things should remain in the past, without evoking them every again. The life of inner suffering is now over.

However, the native yet has to struggle with much insecurity related to relations with people; it is very hard to build your trust from zero, but it is possible. This native should accept the past the way it is and keep it only as a memory.

Once the native was capable of doing so, he or she will be capable of constituting a very practical and fruitful new attitude towards the present, real life.