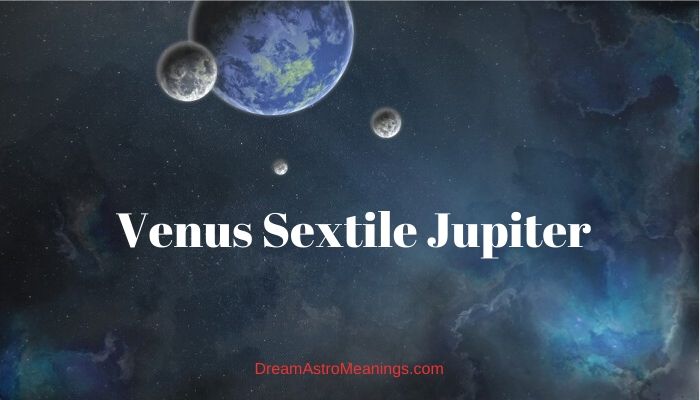 Today we are going to talk about the sextile aspect between two interesting planets, the lovely Venus and the mighty Jupiter.

Astrological aspects are an essential part of astrological charts. They represent special connections between planets.

These connections are, in fact, angels that the planets in question form with one another. There are primary, traditional, usually called major aspects and minor aspects.

Major aspects are conjunction, opposition, trine, square and sextile. Minor aspects are derived from major ones and they are inconjunct, semi sextile, quintile, septile, semi square and novile.

These aspects all have different energies and they affect the planets and their astrological vibrations in a specific way.

Aspects could be favorable and dynamic, but they could also be blocking and not very positive. When planets are in a favorable aspect, their positive energies come forward and those are expressed freely and in balance.

If the aspect was a negative one, the energies are blocked and the bad sides could be influential. All this is of extreme importance when we analyze personal birth charts.

As you probably know, personalized birth charts offer a complex and a detailed insight into someone’s personality and life. Astrology is far more than what people in common talk call horoscope.

Your horoscope sign is your Sun sign, which is a part of a much bigger and more complex story. Aspects are of the essential importance, as they tell about how planets in your birth chart interact.

Venus and Jupiter are planets we are going to discuss today and put them into one specific aspect, the sextile. Before we move onto analyzing their sextile connection, let us introduce you to mythological and astrological meaning of these two planets.

Understanding symbolism and astrological status, to say, of each planet involved, would help us understand their relationship.

Venus in Mythology and Astrology

The planet Venus symbolizes beauty and love, associated with the ancient deity Aphrodite, who is the Roman goddess Venus.

It has also been known as the Morning and the Evening Star, associated with the ancient deity Phosphorus or Eosphoros. Eosphoros is the term we could find in the Latin Bible translated as – Lucifer, the ‘dawn-bringer’ or the ‘light-bringer’.

The confusing and abundant etymological background of the term led to the invention of the story of the fall of the angels.

Venus is associated with copper and air. The goddess Aphrodite or Venus is also the goddess of fertility, abundance, passion and everything that has to do with aesthetics and with pleasure.

The planet Venus represents a strong feminine principle and it could be brought into connection with other notable deities of the ancient world, such as Astarte and Ishtar.

The strange and alluring connection to the Morning Star as understood as the beautiful, though sinful angel, is very interested to look into.

Some would describe the light of the morning star, which we see just before the sun rises on the horizon, as irresistibly beautiful, magical, seductive, though quickly fading, tricky, as an illusion of what it might be.

In astrology, the planet Venus carries the meaning of the all these associations; in short, those of love, harmony, beauty, abundance and pleasure. However, joys and pleasures are experienced and expressed in many forms.

Venus, thus, stands for enthusiasm, but also for laziness, amorousness, but also obsession, deep love, but also shallowness. Venus is associated with vanity, but also with compassion.

Venus stands for the artistic genius, for sensuality, passions, charm and kindness. The energy one would experience regarding the planet Venus would depend on its position in the natal chart and, even more importantly, of aspects Venus forms within the chart.

The place it occupies in one’s natal chart tells about the area of life bringing an individual the greatest pleasure and fulfillment in that sense.

Jupiter is one of the social planets. It represents expansion, as opposed to the problematic Saturn, which stands for restriction.

In order to understand the meaning of Jupiter, let us go briefly through its mythological side. In Roman mythology, Jupiter was the chief of all gods, the brave rebel against his devouring father, the titan Saturn. The counterparts in Greek mythology are Zeus and Cronus.

Saturn or Cronus was the father of Jupiter (Zeus), Neptune (Poseidon) and Pluto (Hades). According to the myth, Saturn knew he is going to be overthrown by his children, so he decided to devour them.

However, Jupiter was hidden away by his mother and he finally defeated Saturn. The three divine brothers have shared the world amongst themselves.

The myth tells about the nature of Jupiter in astrology. Jupiter is a positive planet, the one that represents optimism, expansion, bravery, luck, fortune, hope, reward, triumph, virtue and many more.

It has to do with our own attitude in terms of how much faith we have in ourselves, the world, the destiny and life. It represents wealth and overall fortunate circumstances in life.

Jupiter is associated with long and distant travels, foreign countries and expansion of horizons. It tells about someone’s ideas about morality and justice. Jupiter is considered a protective planet.

The sextile is an aspect similar to the trine aspect, though a bit less dynamic. It means that more effort is needed in order for the energy to flow. In any case, the sextile is a positive, a favorable aspect.

When planets are in the sextile, their positive energy flows freely and balances itself.

The sextile is an aspect that promotes creativity, enthusiasm, energy, positive attitude, expressiveness in its most pleasant and good form.

This aspect represents all the talents a person has in his or hers main area of interest. The sextile supports the creative genius and artistic expression. This aspect is in favor with general dynamic of planetary energy and it stimulates those dynamics, which, in turn, produces creativity in a person.

The nature of this aspect manifests in balance; the individual is creative, imaginative, but organized and balanced.

The sextile contributes to harmonious life and harmonious and positive sense of one’s self. This is not an aspect that forces unnecessary activity and, at the same time, it does not slow the energy down. It is a good aspect.

What is especially important to mention about this one is that the sextile is responsible for overcoming obstacles and difficulties.

We could say the sextile helps one to see beyond limitations, but, at the same time, it does not lead you to extremes. This aspect is good and subtle and it helps in manifestation of all the good traits in an individual.

The sextile aspect helps you recognize good opportunities, especially in the area of life defined by the planets involved with the sextile. Let us find out ho0w it affects planets Venus and Jupiter.

People who have it in their natal chart are individuals who love life and people and who are easily loved by others.

They have a good sense of humor, subtle and adorable. They are open, kind and warmhearted individuals.

It seems everything is a pleasure to them, as they are capable of recognizing it in even the smallest things.

These people are easygoing and easy to get along with. They would rarely ask anyone for assistance or help, as they generally go through life with genuine optimism, which makes them a sort of lucky ones.

However, these are people who would gladly help and support others; nothing is too hard or difficult for them, in that sense. They are people whose laughter would brighten up everyone’s day.

Venus sextile Jupiter people are especially loving, caring and cheerful when in a romantic relationship. Humor, fun, romance are something that goes hand in hand to them.

Truly, they do not take anything too seriously, which does not mean they are too shallow or irresponsible. However, playful attitude is something inborn.

On the other hand, these people are known to be very romantic, sensual and caring. They are dynamic.

These are people oriented towards expansion, especially in terms of their growth in relationships with other people. What is also very common with these individuals is that they usually achieve positions in which they are the ones to offer positions to others.

Venus sextile Jupiter people love to enjoy in their lives, so they would not obsess themselves with worries. They, however, do not neglect negative sides of life and leave them.

The thing is that they usually have a good intuition, so disappointment or a great failure is not a common scenario in their life.

Perhaps the best and the most important thing to say about Venus sextile Jupiter individuals is their easy going, optimistic approach to life.

Their attitude is visible and manifesting in all areas of life. They are welcome in any company and people easily fall for them.

However, it is their natural charisma that makes them attractive. Since with the sextile good energies of both Venus and Jupiter are in balance, these people are naturally appealing.

They do not use their gifts in order to seduce other people. They are usually self-confident, brave, honorable, but not imposing or arrogant.

They are open in their attitude towards everyone else, because they have strong self-integrity, but also because they do not take things more seriously than it is needed. There are hard chances one could bring them down and make them feel down.

These people are capable of finding something they would love in any area of life and in almost every situation.

Even if things are going bad, these optimistic ones would not lose the smiles on their faces and they would not doubt their love for this world. What is more important to know about it is that these smiles are not artificial.

They are truly people who bring laughter and optimism in even the direst circumstances. With Venus sextile Jupiter people, it could happen that they simply do not get serious approaches to romantic life. Their romantic potential is great, as they love the feeling of amorousness.

However, it depends on many other circumstances whether they would decide on a serious approach.

It is very important to know that these individuals are energetic and they do not stand stagnation. It is something they simply see nothing within. Venus sextile Jupiter are not people who easily get mad or angry.

Stagnation periods will not make them lose their head, but it is likely they would try to skip it and move onto something new, exciting and engaging. As we have said, they need growth.

The natural Jupiter’s need for expansion is here colored by Venus’ need for love and connection. That is the reason why they so strongly expect self-growth from any relationship.