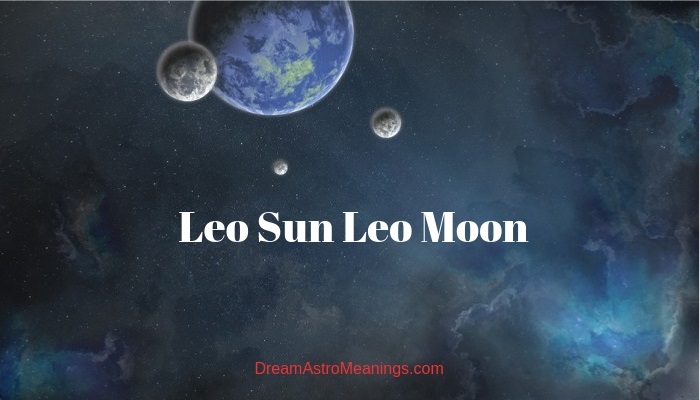 The sun sign describes our rational side of personality and the moon describes the one which is a result of our subconscious impulses. The first is known to the people we interact with, and the second is revealed only to the people we consider closest.

People with sun and moon in the sign of Leo possess strong willpower and usually an exaggerated ego.

These people usually love to be in the center of attention and often have great acting skills. They often behave like they are on stage, and many of them choose their professions in the acting field.

They often have a dramatic way of expressing themselves even in the most common everyday situations.

They are often perceived as drama kings and queens by the people from their surroundings who might consider their attitude and behavior a bit irritating and overbearing.

Many of these people are convinced in their superiority over other people, and sincerely believe that they are better than others and deserve more from life than other people.

In some cases, such an attitude might go to extremes and make these people arrogant and treating people badly.

They are very ambitious and they usually manage to climb to managerial positions where they earn a lot of money to lead other people.

This is when many of these people misuse their power and treat the people who are underneath them with less respect than they deserve or in some cases, completely disrespectful and on the verge of mobbing them.

These people usually desire a luxurious lifestyle and would do anything to accomplish it.

They also desire to climb the social status ladder and usually manage to do that as well.

These people often come from very humble backgrounds, but their ambitious, arrogant, and often snobbish nature pushes them forward towards success.

In many cases they establish their own companies where they can fully express their personality because there’s no one above them to tell them what to do.

Their desire for luxurious items and lifestyle can full many of these people into doing things which jeopardize their financial security and their security as well as the security of their family.

They could become so overwhelmed with spending money on things they don’t need and not be able to get out of the debts which will eventually be the cause of their bankruptcy.

This scenario could happen with badly placed sun and moon in their natal charts, usually in bad aspects with Jupiter and Venus, but also Neptune, Uranus, and Pluto.

In these cases, they could do some damaging things to their lives and the lives of their loved ones consumed with their desire for glamor and overestimating themselves and their financial power.

Fortunately, for most people with this Sun/Moon placement, spending money is not an issue, and they all tend to spend it on luxury and branded items for showing off their wealth and accomplishments.

They know what quality is and even if they don’t know, they simply ask what the most expensive item is and then buy it. Many people could consider that behavior irrational, but to them it is a way they live their lives.

These people love to be surrounded by comfort and luxury, which is why they have luxurious homes, vehicles, go on expensive travels, buy expensive clothes, jewelry, and other items, etc. They are often an object of envy of many people.

We mustn’t forget the fact that these people (with the exception of the ones who inherited their money or gained it through some other means which doesn’t include their physical involvement) all earned the wealth and the money they abundantly spend with their own efforts and hard work.

They made it to the top with the help of their abilities and determination and have the right to spend them the way they are pleased whether the people from their surroundings like that or not.

The good traits of Sun in Leo and Moon in Leo:

The bad traits of Sun in Leo and Moon in Leo:

– irritating, self-centered, arrogant, self-absorbed, selfish, suffer from superiority complex, need to be in the center of attention, loud, dramatic, focused only on themselves, unemotional, prone to bragging and showing off, prone to spend recklessly, disrespectful, actors, behave like they are on the stage all the time, etc.

People with Leo Sun and Leo Moon are not an easy partner or spouse to be with in a relationship or marriage. These people often consider themselves as kings and queens and desire others to treat them in that manner; that includes their partners and spouses.

They need a lot of attention from their partners and can be prone to sulking and giving them the silence treatments if they don’t get what they want.

Their obsession with their importance could be very irritating to their potential partners and not many of them could stay long in a relationship or marriage with them.

These people are not aware of their behavior and attitude and they usually consider themselves perfect.

Their self-absorption can be so big that they need to be the center of every story they hear.

They talk only about themselves and aren’t interested in what other people have to say.

Their selfishness and focus solely on themselves is a trait which often causes people to avoid them. Many of them cannot remain in a relationship for a long time and that frustrates them, and yet they don’t seem to realize that is their character is what is pushing people away from them.

Some of these people, who have a more prominent influence of other signs in their natal charts, might not be as egotistical as the above described. They can be kind and generous people with a great love for their family and children.

If they understand the need to respect others as much as they value and appreciate themselves, they can establish lasting relationships and satisfying marriage.

They want the best for their family and often shower them with gifts they don’t even need.

Their children could become spoilt because of the number of gifts they receive from these people.

These people are typically not very emotional and are mostly focused on themselves. They are passionate and have a strong desire for physical intimacy which they need to satisfy.

Before marriage they could be prone to multiple dating and experimenting with different partners, but after making a commitment to one person exclusively, they usually become faithful and loyal to their partner or spouse.

They are good providers and make sure their family and loved ones don’t miss anything.

They are also prone to showering their partner or spouse with expensive gifts, jewelry, clothes, vehicles, houses, travels, etc.

Some of these people treat their partner or spouse as their possession and love to show off with them as their trophy.

The best match for a person with Leo sun and Leo moon is a sign which is not strong willed and can put up with their egocentric behavior and arrogance.

They could get along well with Gemini, Libra, and even Aquarius. Sagittarius could be a good match for them as well, providing they give them space for their activities.

Earth and water signs are not a good choice because of their opposite characters.

Of course, if a person with predominantly earth or water element has some fire element in their natal chart, theirs could be a successful relationship, providing that they could tolerate their overbearing character and arrogant behavior.

People with sun in Leo and moon in Leo usually have a character which is self-absorbed, arrogant, and difficult to bear.

They are usually focused on themselves and their lives and don’t care much about other people. They desire to be in the center of attention all the time and love others to admire them.

They could be very loud and dramatic when expressing themselves and their opinions, which is usually a result of their desire to be noticed by others.

They love to brag about the things they have. These people love money and love the luxury and comfort money provide. That is what inspires them to earn it and they are usually very successful at that job.

They strive towards success and climbing up the social ladder and they usually manage to reach high. They often end up in managerial positions or they become owners of their companies.

These people usually are financially secured and can provide the lifestyle they desire, but in some cases, they could exaggerate with their spending and jeopardize their financial security and the security of their family and loved ones.

They can be prone to treat people with disrespect and act as if they are better than everyone else. Many of these people suffer from a superiority complex and honestly believe that they deserve more from life than the rest of people.

They usually talk about themselves and that is the only thing that interests them.

When other people talk, they easily stop their talk and turn the story back to them and their issues.

They are not very emotional, and their emotions are usually focused on themselves. Their partner should be a very tolerant person who is willing to put up with their egocentric nature and need to always put themselves first before everyone else.

They often get abandoned by their partners because of these traits but they are usually unaware that the reason is their obnoxious and irritating character.