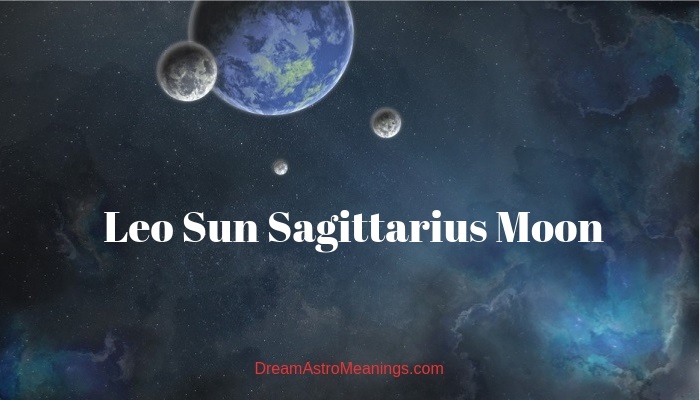 The sun represents our outer personality and our rational behavior; the moon is our inner being and our subconscious.

People with sun in Leo and moon in Sagittarius have a double fire element in their character which makes them very active and energetic.

These people have powerful personalities and they don’t hesitate to go after their desires. They are optimists and they usually have a very high opinion of themselves and their value.

These people usually love to be in the spotlight and desire to be admired.

Their personality is open and relaxed although with their sun in Leo, they might be prone to choose who they hang out with, unlike Sagittarius, who will talk to anyone who will listen to them.

They are usually sports types or they practice some sports to stay in shape. These people often have issues with gaining and losing weight. They have periods of overeating, followed by periods of exhausting trainings in the gym.

They tend to exaggerate under the influence of Jupiter, the ruler of their moon.

One of their favorite activities is traveling. They adore traveling and usually travel often, both for work and for pleasure. They often consciously choose professions which involve a lot of traveling.

These people also enjoy meeting new people and exploring their culture. They are very intelligent, curious, and knowledgeable.

It is hard for them to be long in one place. Their moon calls them to be on the move all the time, and although Leo is the stabilizing factor in this person’s character, its influence is not enough to stop these people from their quests for new experience and diversity.

Jupiter and the sign of Sagittarius rules distant and faraway places, and the moon is the ruler of our home. These people often end up moving to a new home in a distant country, or at least spending months somewhere far during a year.

They are happiest when they are away on their adventures. Their ego is often huge and they desire to be admired and appreciated by others.

They are ambitious and usually don’t have problems with achieving success. They are also blessed with good luck, and opportunities usually come their way with ease.

If their Sun and/or Moon make good aspects with Jupiter, they are likely to experience great wealth and high position and status in society.

They will certainly be financially more than well-off, unless they have some very badly aspects in their natal charts. They could also be blessed with good luck when playing games of chance and similar gains which don’t include their effort, but mere luck.

These people have leadership qualities and they often reach to managerial positions and/or owning their businesses.

Despite their egotistic and often vain nature, they are usually very honest, truthful, righteous, and selfless beings. They enjoy helping people and do it with all sincerity.

They are tolerant bosses and they usually take care of their employees (of course, there are exceptions).

They are born optimists and don’t allow challenges discourage them from their goals. They know what they want and they are determined to get there.

They could be a bit impatient and prone to making mistakes due to lack of focus, but their good luck often annuls the consequences of their wrong actions with a set of fortunate circumstances.

Some of these people can be prone to relying on their good fortune way too much and that could in some cases backfire against them.

These people are determined to look at the bright side of things and nothing can divert them from that path. They don’t allow other people’s negativity influence them, which is why they try to avoid them, or simply remove themselves from their energy.

They are confident and don’t allow to be influenced by other people’s comments or opinions.

The good traits of Sun in Leo and Moon in Sagittarius:

The bad traits of Sun in Leo and Moon in Sagittarius:

In matters of love, people with Sun in Leo and Moon in Sagittarius are usually relaxed and open.

They often have a friendly approach towards their potential partners and don’t usually begin a conversation with someone with an idea or a plan to ask that person out or do something similar in regards to potentially starting a relationship with that person.

They easily make connections with people, and meet a lot of them. It is easy to them to approach someone they like and start talking to them.

They don’t approach everyone though, and choose the people that they like. These people are very interesting and enjoy entertaining others.

They always have a smile on their face and their optimism and happiness seems to be contagious. People love being in their company because they spread positive energy and enthusiasm.

They are very charming and often good looking. Their unassertive approach relaxes people and makes them want to approach them. These people usually love dating, but many of them don’t like commitments.

The main reason is their adventurous nature and their love for freedom.

These people have a hard time imagining that they would need to lose their independence and freedom by entering a commitment such as a marriage. They often prefer open type relationships where they and their partner can have relationships with other partners, and they don’t have issues with that.

It is not that these people are prone to multiple dating and cheating (although some of them are); it is more that they don’t want to feel restricted by anything, and that includes marriage.

They often don’t want to have children because they know that they wouldn’t be able to dedicate themselves as much as they should because of their way of living.

Not all people with this combination are like this; some of them have a predominant Leo sun influence in their charts, in which case they are more prone to committing and establishing their family.

Leo’s love children very much and they usually want large families. As parents, these people try to inspire the spirit of adventure in their children as well as their desire to learn new thing and experience new cultures.

They also teach them about the need to be honest, truthful, and respect other people’s rights, especially the right to be different.

These people are gentle and tender partners who love to cuddle with their spouses or partners. They are romantic and have creative ideas to make their partners happy.

They love to travel with their partners and often organize their adventures to distant countries.

Their partner should be an active person, and someone who is open-minded and tolerant towards diversity like they are.

They are passionate people, and desire a partner who is passionate and shares their desire to enjoy in physical pleasures. They are not emotional in the classical sense of the word.

They love people in general, and they are not prone to expressing their affection in words.

They show their love with their actions and for the lucky ones, through their desire to give up on their independence and previous lifestyle to devote their lives to their partners.

People with Leo sun and Sagittarius moon are full of fire and adrenaline.

They are very energetic and in constant seek of adventures. They need someone who is dynamic and always ready for action, just like they are.

The best partner for these people would be also a fire sign, maybe with a touch of water or earth element to calm down their fire.

They could get along well with all the other elements (earth, air, water), providing that their partners have some fire element in their chart as well.

People with sun in Leo and moon in Sagittarius are energy bombs. They are prepared for action and it doesn’t take long for them to get moving.

They have adventurous spirit and love exploring new cultures and meeting new people. That is what makes them frequent travelers, and traveling is something they love very much.

They are optimists who always have a smile on their face.

Their enthusiasm is contagious and people enjoy being in their company. They have a friendly approach towards people which relaxes them and makes them open easily.

They love their independence and freedom very much which often poses a problem for long-term commitments which they often tend to avoid. They often choose open type relationships, but some prefer long-term partnerships and marriages.

In most cases they have a high opinion of themselves and are usually successful. They are usually blessed with good fortune which gives them a lot of opportunities for progress and accomplishing their desires.

These people are usually well-off financially, and some of them are very rich.

They are usually honest, truthful, and respect other people’s rights. They love people and can get along with almost anyone.