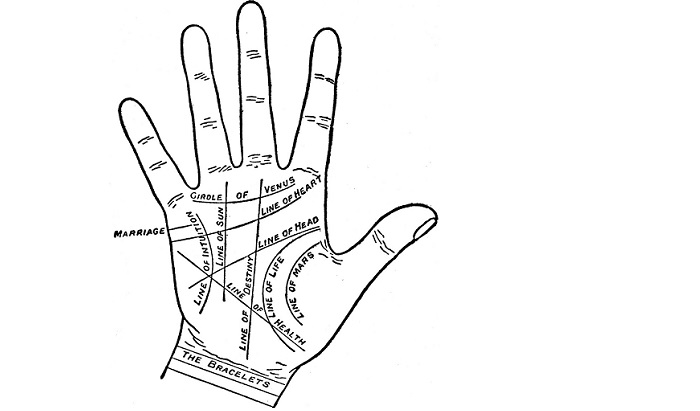 Palmistry is an ancient art of reading people’s destiny and determining their character, by analyzing their palms. This ancient discipline is widespread throughout the world. Its origins are in India, from where it spread to China and other Asian countries.

Today, palmistry is practiced all over the world. There are many palmistry schools, which have a different way of interpreting some signs and symbols on the palm, but the general rules of palm reading usually remain the same.

Also, every palm reader, adds a personal touch to their readings.

In Europe, palmistry was a forbidden discipline during the middle ages because it was considered a form of fortunetelling and witchcraft, and witches, as well as palmists who practiced palmistry were persecuted.

Its use began again in the late 19th century and since then it has been present in countries all across the world.

People who practice palmistry and do palm readings are called palmists or palm readers. They do the readings based on the knowledge gained from their palmistry teachers, but they also incorporate their own experience in their palmistry readings with their clients.

Palmistry readings consist of deciphering special details on people’s hands. Palmists pay special attention to the color of the hands, their shape, as well as the shape of the fingers.

They also analyze the markings on the hands and fingers, such as the existing lines, and other symbols. Some lines are present on most people’s hands, and some appear on the palms of some people.

There are also some symbols, which appear only in rare cases and they have a special meaning regarding the destiny and the character of the person who possesses them.

Palmists also pay attention to the state of the mounts of the hand and the overall condition of the skin on the palm.

One hand is more important than the other in palmistry reading, and that is the so-called, dominant hand. The dominant hand is the one the person uses the most, and it is usually the one, they write with.

With most people, that is the right hand, although the left can be the dominant as well.

Approximately 80% of information palmists gather from the dominant palm, while the other 20% comes from the non-dominant hand, which gives them additional details.

Palmists pay a lot of attention to the lines that appear on the person’s hand. They are the main source of information about the person’s character and destiny.

The main lines are the Life line, the Head line and the Heart line. Lines that often appear on the hand are the Fate line, Sun line, Mercury line, etc.

Sometimes these lines are absent from the person’s palm. Some lines are present in the person’s hand to indicate some events that will happen in their life and they also describe the nature of these events, in terms of whether they will be beneficial or not for the person. One of these lines is the Marriage line.

The line can give a lot of insight about the person’s attitude towards love matters, relationships, marriage, as well as the potential timing of their marriage.

The Marriage line is located under the little finger (the Pinky, or Mercury finger in palmistry), right below the base of that finger, and above the Heart line. Some people have one Marriage line, some have several, and some people don’t have a Marriage line.

If there are several lines below the base of Mercury finger, the longest one is the basis for the reading and the other ones give additional information about the person’s love life.

It is important to note that the lines on our hands change as we evolve and gain experience.

New lines form on our hands throughout our lives and some lines can disappear. Some lines can also change, and that can happen to our Marriage line as well.

Our palms, reflects our inner state and that is why when we change something in our beliefs, behavior, or emotional response towards certain situations, that can reflect on our palm lines as well.

Because of that, it is important not to be upset if your Marriage line isn’t in a great state.

People change, and their experiences change. You might have disappointments in life that will make you aware of your true desires, and with that change, new and better experiences will begin happening, not just in your love life, but in all areas of your lives.

One Marriage line – if the person has only one Marriage line, which is straight and clear, that is a great sign for the person’s love life and marriage. It usually indicates finding the right person with ease and having a lasting and harmonious marriage.

If there are no other lines above or below the line, that indicates a long lasting marriage.

Several Marriage lines – most people have more than one Marriage line. Usually that doesn’t mean that the person will marry several times or as many times as the number of Marriage hands that exist on their palm.

These lines usually serve to give additional information about the person’s love and marriage life.

If the lines are clear and deep that is a good sign and indicates a stable and harmonious marriage. If the lines are parallel to one another and are similar length that could be a sign of changeable luck in love.

It often appears on hands of people who reunite or remarry the same person.

More than four Marriage lines – If there are many lines in the place where the Marriage line should be and none of them could be considered the major one that is not a good sign.

This could describe a person who is very choosy in regards to finding the right mate, and they usually have a difficulty in establishing a relationship with someone because they consider no one good enough for them.

These people could not even be attracted in the opposite gender. They often focus their interests on other areas of their life.

Sometimes the Marriage line appears later in life, and it is a common thing to be absent in the hands of young people.

This line could develop as they grow and gain more relationship experience. If a married person doesn’t have a Marriage line, that could mean that they don’t have a good connection with their spouse or they don’t love them.

If the line is close to the Sun line, or touching it, that is an excellent sign and indicates a happy marriage, but also achieving success in life and career after marriage.

They are blessed with a good relationship with their partner/spouse. The curvier the line is the happier their love life is.

If the line curves towards the Heart line and touches it that usually indicates a marriage life filled with conflicts with their partner/spouse.

This Marriage line is often a sign of separation or divorce.

A broken Marriage line – If a Marriage line is broken, that is not a good sign for the person’s love life. It usually indicates obstacles and crisis in the person’s relationship or marriage. It is often a sign of disagreements and arguments with the partner or spouse.

Often the relationships or marriage end in separation or divorce.

The length of the broken part is very important to determine the severity of the issues the person could experience. The longer the break is the bigger the problems are.

If the break in the line is short, there is a chance that the couple will reunite after a short breakup.

A Marriage line with islands – if the Marriage line has an island, or islands, that is not as good sign, and usually indicates a mental incompatibility with your partner or spouse. It is often a sign of conflicts and disagreements in the relationship or marriage.

If the island is at the beginning of the line that indicates that the person has an unsatisfying love life before marriage.

If the island is in the middle of the line, it indicates a changing luck in love. The person is either happy or unhappy in love; it lacks general stability and harmony in love life.

If the island is at the end of the line that is a sign of conflicts and problems that begin after the person marries.

If the person has a lot of islands on the Marriage line, that is not a good sign for relationships or marriage.

A Marriage line with the sign X – if the Marriage line has the X sign on it that is not a good sign. It signifies problems in love and marriage. It is a sign of quarrels and disagreements with partners and even a separation.

It could also be a sign of infidelity which could cause the end of the relationship or marriage.

Marriage line in a grill – If there are many lines forming a grill on the place where the Marriage line is, that is not a good sign for the person’s love life and marriage. It usually indicates difficulties in finding the right partner.

They often end up not marrying anyone. In marriage they often experience infidelity by their spouse. The marriage situation gets worse later in life.

It also indicates choosing the wrong partners, ending relationships or divorcing their spouses.