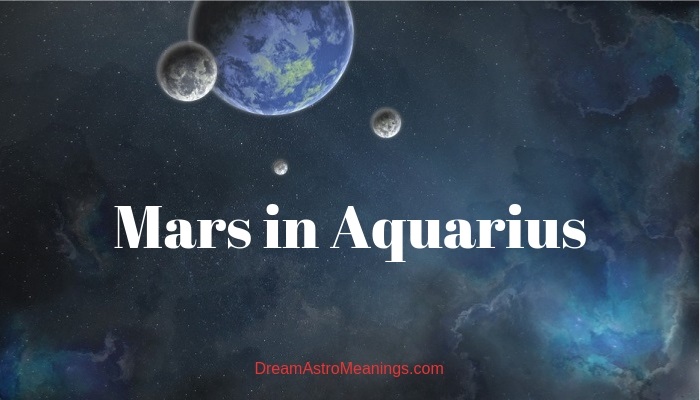 Mars is the warrior planet. It is small but has a powerful influence. This planet’s surface is covered with red iron dioxide, and that substance causes its reddish color. Because of that, this planet is often called “the Red Planet”.

This planet is very similar to Earth. There are many theories about life on Earth deriving from the planet Mars, which was once in the past an inhabited planet full of life.

Many people believe in the possibility of humans inhabiting Mars in the near future.

The planet got its name from the god Mars which was a prominent god in the Roman pantheon. The Roman god Mars was the ruler of war and warriors. He was considered the protector of Rome and defender of its borders. Romans dedicated the third month of the year to this god and many festivities were held throughout the year to honor this deity.

In some Roman myths, the god Mars is depicted as the father of the mythical founders of the town of Rome, Romulus and Remus. In these myths, their mother, Rea, a Vestal virgin, was raped by the god Mars, while asleep.

During its transit through different signs, Mars receives the influence of these signs. It takes around two months for Mars to go through a sign when it is in direct motion.

In the article below, we will give you some of the characteristics of people born with Mars in Aquarius.

Men with Mars in Aquarius are often adventure seeking adrenaline addicts. These people are often eccentric and have their own way of doing things. They are often super intelligent and motivated by new experiences and discoveries.

These men are often innovators and make discoveries which benefit many people.

They often have unpredictable reactions and don’t take their time considering the potential consequences before getting into action. They are prone to taking risks and often put themselves in dangerous situations. They often practice dangerous and extreme sports where there is a great chance of jeopardizing their life and hurting themselves.

These men are prone to accidents and often experience some disastrous events due to their reckless and thoughtless behavior.

These men are very intelligent and often interested in areas such as IT, technology development, electronics, electricity, aviation, and similar. They often make a career in these areas, and some of them are even genius inventors of things which could benefit a lot of people or the entire humanity.

Their eccentricity can sometimes be hard to understand by other people, but it is something they should learn to accept because it is unlikely for these men to change.

They are usually sociable and love to be surrounded by people. Their behavior might seem weird and eccentric to some people from their surroundings. These people don’t like to resemble anyone else.

They have strong individuality and are very independent.They love their freedom and make sure to protect it. Women who try to invade their space might be in for a disappointment because these men don’t easily allow that, even to the person they are in love with.

These men are born humanitarians and usually enjoy fighting for the rights of people. They love helping others and they do it sincerely without expecting anything in return.

Women with Mars in Aquarius are unusual beings. Their reactions are unpredictable and they usually aren’t very feminine. These women are often into adrenaline boosting sports and activities. They often prefer men’s company and they have more guy friends than girlfriends.

These women are always in pursuit of action and prefer being outside than in their home.

Their interests are also not typical for most women. They are interested in technics, technology, electronics, IT, and similar areas. These women can be equally successful in these areas as men are.

They are often very clever and able to make innovations which could serve people.

They are not very emotional either. They prefer men who are active and often a bit weird. They like to be around people who have similar traits to theirs, and they are usually a bit weird. They often shock people with their behavior or reactions.

They have an unusual style in clothing as well as hairstyle.

These women can be very open when speaking their opinions and their openness could be considered offensive by people who have difficulty hearing an honest opinion about themselves. They should try to pay more attention to other people’s feelings.

They have good souls and are always ready to help others. They help out of the kindness of their hearts and never expect a reward in return. These women are often involved in some major humanitarian cause or work for some institution which fights for human rights.

Even if that is not the case, these women are the ones who will selflessly help anyone in need.

Some of the good traits of people with Mars in Aquarius are:

Some of the bad traits of people with Mars in Aquarius are:

Mars in Aquarius is not the best placement for this planet. It gives these people unexpected reactions and often an unusual personality. These people often have a rebellious nature and usually have problems dealing with authorities. They often oppose them and don’t like to be told what to do.

These people are often human rights activists, but in many cases they do it in an extreme and even aggressive way.

People with Mars in Aquarius are prone to rash decisions and actions. This sign in combination with the planet Mars often gives these people a dose of eccentricity and unpredictability. They are the ones who introduce changes and innovations in our society.

They are always in pursuit of new things and experiences. These people are pioneers which others tend to follow, although at first, they do it reluctantly.

They are very extrovert and love to be around people. They are driven by their ideas and are often in the pursuit of making them a reality. These people often have explosive and unpredictable reactions, and many of them can be quite aggressive.

To their surroundings, these people might appear weird and unfit. They always seem to have a different way of achieving the same goals or getting the desired result, which makes other people feel as if they have some supernatural qualities.

One thing is sure, they are very intelligent and have a way of practically demonstrating their intelligence.

These people are the ones who selflessly sacrifice their own lives to help someone in need. They are often in professions such as firefighters, the military, aviation, police, etc.

These people don’t tolerate injustice and often fight for the rights of some social groups or individuals. They are often the leaders of such groups. They enjoy confrontation with authority figures and in some cases don’t hesitate to use force against them.

They are good at teamwork and in general love being around people. They care much about their freedom and independence and don’t allow anyone to jeopardize them. They don’t like social conventions and especially dislike obeying rules.

They prefer working in environments where there isn’t a strict established hierarchy and they don’t have to follow any rules and obey anyone’s policies.

They can be unreliable at times because of their unpredictability. Even they themselves don’t know how they will react in certain situations. They are prone to changing decisions and plans without minding if their decisions are hurting someone’s feelings or changing their plans.

They always follow their inner guidance and act as they feel at the moment. They usually don’t give much thought to their actions, which can cause damage either to them or other people.

These people are often genius and make some incredible discoveries which benefit many people. They are usually interested in IT, new discoveries, electronics, electricity, technology, and similar areas. Some of them are successful scientists or genius innovators in these scientific areas.

The sign of Aquarius is ruled by the planet Uranus, which in general rules sudden unexpected events, disasters, accidents, and similar events. When Mars is in Aquarius it often indicates the potential for experiencing accidents and major disastrous life events.

People with Mars in Aquarius in heavy aspects with some malefic planets, such as Saturn or Pluto, or even their Sun and Moon, are often prone to accidents and need to be extra careful about their well-being.

The irony is that these people are prone to taking risks and are often in situations where their lives are in jeopardy.

Mars in Aquarius people, both men and women are fond of extreme activities, especially extreme sports. They are adrenaline addicts and the riskier the circumstances are, the better they feel. Unfortunately, these situations are often the cause of injuries or other misfortune they might encounter.

Regardless of that, these people are usually fearless and don’t think much about the potential risks of their activities.

These people usually value their freedom very much, and don’t allow anyone to jeopardize it.

They love the sense of being able to go wherever they want without restraints. That is why they don’t like being tied down by work obligations and rules, and prefer careers where they will be able to manage their time and work without needing to succumb to work policies and regulations.

People with Mars in Aquarius are kind-hearted, selfless human beings. They will leave everything to help people in need, even if they happen to be complete strangers to them.

These people, both men and women, can be perceived as weird and eccentric by the majority of people from their surroundings, but no one can deny their kindness and gentle nature.

They are adventure seekers and love to do activities which boost their adrenaline. Most of them are into extreme sports or activities and love to be in the company of people with similar interests.

They are full of energy and often jeopardize their well-being with their activities.

Unfortunately, their nature often puts them into situations where they can experience accidents and injuries, and that often happens as a result.

They can be prone to thoughtless and rash decisions or actions which could jeopardize their wellbeing or the wellbeing of someone close. They have a problem with self-control and often react before thinking through a situation. It is something they should work on because it causes problems in their everyday life.

These people are usually very intelligent and some of them are true geniuses. They are also eccentric and often weird according to the usual standards, but people need to accept them as they are because they cannot change who they are.

They are usually disobedient to authorities and they don’t like to be told what to do. Their freedom and independence are very important to them, and people who are close to them should learn to respect and accept that part of their personalities.

They are usually not very emotional and prefer being with people who have similar traits.