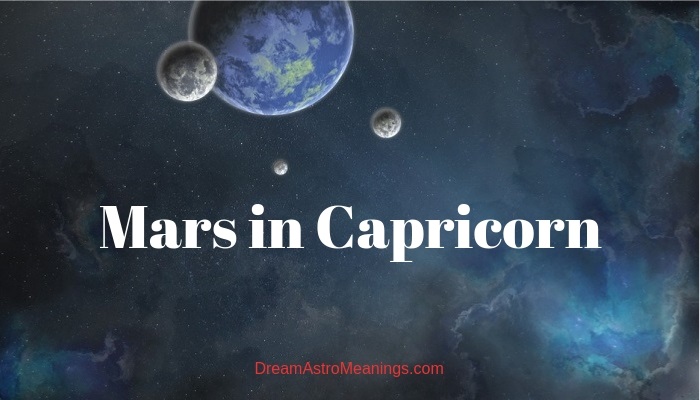 Mars is not a big planet. In fact, it is the second smallest, following Mercury as the smallest planet in our Solar system. This planet’s surface is covered with red iron oxide; this causes the planet to appear reddish, which is the reason it is often called the “Red Planet”.

The planet Mars is similar to our planet. Many people believe that life had existed on this planet in the distant past, and many also believe that it is possible to inhabit Mars with humans in the future.

The name of the planet comes from the name of the Roman god of war. In ancient Rome, the third month was dedicated to the god Mars and bore its name.

In an astrological sense, the planet Mars is the ruler of the signs of Aries and Scorpio. When this planet goes through these signs it has the strongest power. Mars receives the traits of the signs it goes through. It takes around two months to go through a sign.

In the text below, we talk about the traits of people born with Mars in the sign of Capricorn.

A man with Mars in Capricorn is full of stamina. These people burst with energy which they thoughtfully channel into helping them achieve the goals they desire. They are very organized and make plans ahead because they don’t want to risk making any mistakes.

They are focused on their goals and have a strong desire to succeed. These men are usually very successful and reach high positions in their career, but also reach high on the social scale.

They are usually financially well-off because they make sure their efforts are adequately rewarded. They prefer good-quality stuff and have an eye to recognize it.

These men are very passionate but don’t appear as such on the outside. They usually carry a mask of seriousness and disinterestedness which makes people unaware of their true nature. They are not very emotional and have a rational approach to relationships as well.

When they want to be with a girl, they will do everything to win her over, and will usually succeed.

They are very reliable and responsible, and people often confide them important things in their lives. They have leadership qualities and often occupy leadership positions. In their relationships they demand to have the leading role.

Both men and women born with this Mars placement have prominent leadership and organizational skills, and are usually leaders in their surroundings.

They are very focused on achieving their desires and goals, and they don’t allow any obstacle to discourage them. They know what they want and won’t stop until they reach there. These men are often inspired by challenges rather than frightened.

They are often fearless. If someone tries to harm them in some way, these men can be fierce enemies. They can also be vengeful and wait a long time for a chance of revenge to someone who has done them harm.

These men are usually robust and have good health. They often tend to exaggerate with their physical activities, but their robust built prevents them from suffering any kind of damage to their health.

Women born with Mars in Capricorn prefer their men to have Capricorn traits. Their man needs to be confident and stand firm on the ground. He should be reliable and organized and focused on his goals.

These women have similar traits. They have a lot of constructive energy and are very practical. They don’t have time to waste on imaginary situations and prefer the real deal.

They are hard workers and don’t hesitate to put in extra effort when things need to be done.

These women are usually not very emotional, and they have a rational approach to love matters. They have high standards regarding the man they choose to be with, and they usually don’t lower them regardless of the reason. They prefer men who are robust and enduring.

They are well-organized and patient. They have excellent planning skills and they make sure nothing slips their mind. They don’t like making mistakes and they can be a bit of a perfectionist. These are the traits they prefer their man has as well.

Women with Mars in Capricorn are very enduring. They are passionate and love physical intimacy, but they don’t appear like that on the outside. These women are usually perceived as tough and not easy to please.

They usually wear a mask to protect their true personality, but they often do it because they don’t like to share their privacy with people they don’t care about.

They often have a cruel trait in their personalities and are not tolerant of other people’s weaknesses. They are hard workers and cannot stand people who tend to avoid their duties or are lazy and prone to procrastination.

Like men born with Mars in Capricorn, these women are very ambitious and aim to reach high in their career and in life in general. They prefer a relaxed lifestyle where they don’t need to worry about money and saving, and they tend to provide it for themselves.

They work hard, but they also demand an adequate reward for their efforts.

Some of the bad traits a person with Mars in Capricorn has are stubbornness, vindictiveness, not very emotional, cold, cruel, brutal, hiding their true nature, exaggerating in work, dominant nature, etc.

The planet Mars in the sign of Capricorn is in a good position and very potent. People born with this planetary placement are serious and thoughtful when they are planning some action, and their moves are structured and well organized.

These people are usually very determined and focused on the achievement of their goals. Their goals are thought about carefully and they make sure no mistakes occur during their actions.

People with this placement have enduring nature and don’t give up when things become difficult. They are not easily discouraged. These people are often fearless and they push their limits to the final boundaries. When things become challenging, that usually inspires them to put more effort into achieving their goals, and they more than often succeed in their attempts.

These people usually have powerful personalities and strong bodies. They are confident in their abilities to achieve their desires. These people are usually not very emotional and have a rational approach to the matters of the heart.

Overly emotional people could easily get hurt by their cold remarks. These people are focused on real and practical matters and often consider romance a waste of time.

People with this Mars position are very energetic and have a strong physical drive. They are passionate and enjoy physical intimacy. They are very enduring and prefer partners who can adequately respond.

Typical people with this placement are the ones who never give up on their ideas and goals. They are often very successful and they build their career brick by brick, until they finally reach the highest positions. Their success is usually richly financially rewarded.

These people have a fierce and fearless nature and they make an admirable opponent. They are very ambitious and don’t allow anyone to stand on their way to reaching their goals.

In some cases, people born with Mars in Capricorn can possess some cruel and brutal traits, and in such cases, they can be capable of doing some morally wrong and even unlawful things.

They can be very vengeful and remember the wrongs they suffered from some people for a long time, until the moment comes to get their revenge.

These people have a lot of stamina and endurance. They don’t like wasting their time without doing anything. They prefer always to be occupied with something and they are hard workers. They often tend to exhaust themselves at work.

These people are also very serious and organized. They detest people who don’t respect their duties and are not focused on their goals. Laziness and procrastination make them disgusted.

People with this Mars position are very fond of material things. They love being surrounded by quality things and are aware of the benefits money can bring into one’s life. That is why they are usually focused on establishing financial security and being able to enjoy its fruits.

They are very practical and tend to accomplish their plans using the simplest means, especially using the less possible amount of time and resources.

These people have a dominant nature and are usually leaders in their surroundings. They instinctively know what should be done in certain situations, and that is why people enjoy following their lead.

This is their typical behavior in their relationships as well, both with women and with men.

They are robust and usually have good health. They have an excellent sense of self-control and never have irrational reactions or moves. They are always aware of their surroundings and their reactions are a result of clever thinking and are never impulsive.

These people almost never react aggressively. Their anger exists, but it is repressed and masked with coolness. Their self-control is excellent, and they use it often to repress their reactions and often some urges.

They have a strong sense of discipline and nothing and no one can influence them if they don’t want that. These people are very dignified and want people’s respect.

Their goals are usually realistic and achievable. They don’t have a vivid imagination like some other signs, and never rely on luck for things to happen in their lives. Instead, they focus on putting in hard work to achieve what they want. They are very reliable and responsible people.

They are not prone to changes and are loyal to the values which have passed the test of time. They can be quite stubborn and stick to some ideas and beliefs, even when deep down they are aware that they are obsolete and need to be changed.

People with Mars in Capricorn are tough and enduring. These people are very confident and cannot be easily influenced. They know what they want and are out to get it.

They are usually very organized and plan their actions ahead. They make sure they don’t miss a detail because they don’t like making mistakes.

They are very dignified and expect to be treated with respect.

They are usually very ambitious and have big, but realistic plans for their future. They don’t like people who live in an imaginary world because they are very realistic.

These people are very reliable and instill confidence in people. They usually have leadership qualities and are often in a position to lead and organize other people. They prefer and often demand a leading role in their relationships as well.

They avoid weak and indecisive people. They are very determined and persevering, especially when it comes to accomplishing their goals. They cannot relax before they put in all their efforts into achieving some plan or goal. They don’t accept failure and do all they can to succeed in their intentions.

They usually have good health and are robustly built. These people, both women and men are usually very passionate, but they don’t allow that to be apparent to the people from their surroundings.

They prefer to keep their privacy to themselves and need time to relax and get to know someone before showing them their true face.