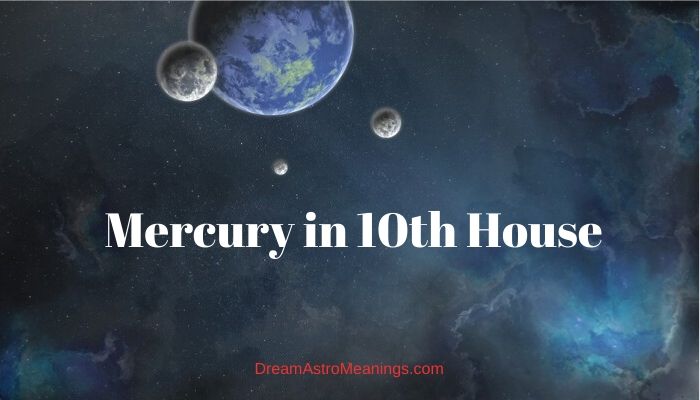 Planets in houses could offer us precious insight into specific areas of life and our potentials regarding those areas.

Each natal chart is divided into twelve astrological houses, segments that represent fields of life.

Planets that are to be found inside the houses affect our personal experience within these fields.

Depending on your unique natal chart, some houses will host more planets, others none. However, each will manifest in a specific way.

Twelve astrological houses are analog to twelve zodiac signs. Houses could be angular, succedent or cadent.

The first group is associated with cardinal zodiac signs, the second with fixed signs and the third with mutable signs.

Houses could also be taken as Fire, Earth, Air and water houses, each group of specific energy and meaning.

Today we will be talking about one angular house. The Tenth House is analog with the sign of Capricorn and it is an Earth house. Earth houses are associated with wealth, achievements, acquiring and building.

The Tenth House is the house of success, related to career, job, professional status and the attitude towards everything that has to do with it.

This house is of essential importance, especially in our modern, business oriented world. This house could tell about the ways someone could achieve success on the professional plan.

However, it itself does not guarantee any success. It all depends on you. This field could indicate your potentials regarding professional success.

There are stories of people who have achieved tremendous success and gained a lot of money starting from literally nothing.

Their courage, self-confidence, drive, optimism and other characteristics helped them overcome difficulties and climb the ladder.

On the other hand, there are people who have lost everything due to their incapability to handle things, even if they have a fair and comfortable starting point. In other words, you are the master of your destiny, when it comes to these things.

The Tenth House, however, tells about opportunities and potentials. You are the one to recognize and use them into your advantage. For example, this field could reveal some tactics or things or situations you could use.

Sometimes we should do things that appear non-important, in order to achieve something more. By reading the Tenth House, you have better chances not to miss out such indicators and opportunities.

In addition, the Tenth House could indicate potential problems and troublesome circumstances. It will be easier to avoid them, to prepare for them and resolve them if you know about them.

Therefore, reading the Tenth House is of great importance and could be very useful. This house is considered one of the most significant in life, as it tells about all the acknowledgements, accomplishments, rewards and prizes related to one’s professional activity.

The planet Mercury is nearest to the Sun, a faithful companion the brightest of the stars visible from our point in cosmos.

Mercury travels pretty fast and it is the smallest planet in the Solar system. It is only a planet away from the earth, so astrologers strongly believe it has a great impact on our earthly lives.

According to astrology, planets greatly affect each individual and his or hers destiny. Everything has been written in the stars, though not in an obvious and a simple was as you might expect.

Anyway, Mercury is one tricky and interesting planet. Its nature is changeable, as it could imitate the energy of a planet it stands along in the horoscope; the planet with which Mercury forms a strong aspect.

The quality of this planet is dry and cold; it has nothing to do with Mercury being so near the Sun, with a blowing temperature score of more than four thousand Celsius.

This planet is neither masculine nor feminine. It is neither a daily nor a nightly planet. Mercury is the planet of nervous nature and it is associated with our nervous system from a medicinal point of view.

In addition, we cannot tell that Mercury was a malefic or a benefic. It is flexible, adaptable and it absorbs the nature of other planets easily.

Traditionally, Mercury is the planet of communication and intellect. It rules our rational mind, practical and logical thinking.

Mercury strives for novelty and information. People who are ruled by Mercury are curious and cunning. They have something on their mind all the time and they enjoy analyzing things.

Mercury people have an eye for details and they are very neat and precise, when it comes to both analyzing and doing things.

Logic, rational thinking and common sense guide them, although, depending in Mercury’s placement an aspect, they could be temperamental and impatient.

People ruled by Mercury are intellectual individuals, interested into studying and learning. They love to read and to travel, as both activities provide them with new knowledge and satisfy their thirst for novel information.

They learn through immediate experience, but also through studying in a more theoretical manner. They are philosophical and quick-minded people, efficient in resolving problems of all sorts in a most practical way.

Anything that has to do with communication, in the widest sense possible, is their thing. Not all Mercury people have to be extremely talkative and performing.

Some of them are excellent columnists and writers, rather than spokespersons.

However, most of them present with impressive rhetorical and performing skills. It is not only that they know how to speak, but they know how to communicate any message in an understandable, concise and a direct way.

They are pleasant to have around, as they are generally very positive and easygoing, ready to debate and converse. They choose their words wisely, but they are neither stiff or too solemn and serious.

They just love a good joke and have a great sense of humor. They are not very emotional, generally speaking, as they move around all the time, in search for anything new.

They do not get attached easily. People dominated by Mercury are restless, adventurous, youthful and enthusiastic. Wise and clever at the same time, they could be great manipulators, as well.

People generally like to have them around, but they are not considered particularly reliable; some of them are really not to be trusted.

Of course, the way their Mercury energy will manifest, depends on the position of the planet and other factors.

If Mercury were in unfavorable aspects, these people would have trouble communicating their messages or being understood by others. They will face difficulties in trying to express their thoughts. With non-pleasing aspects, Mercury could be troublesome.

On the other hand, if Mercury was in a good position, all the positive qualities will take place.

Such people have an excellent memory, they are amazing students and education means a lot to them. In addition, their power of perception is brilliant and they read people very well.

Mercury dominated people could be great mathematicians, linguists, journalists, managers and else. Anything that requires a very dynamic use of intellect is their thing.

These people could also be very religious and interested into less exact paths, such as astrology and parapsychology, even some sorts of divination practices. Spirituality could take a very important role in their lives.

Although this might sound confusing, having in mind how rational and logical these people were, it is just another type of communication. They strive for getting in contact with higher spheres, some of them at least.

Mercury in the Tenth House – Mercury in 10th house

Mercury in the Tenth House indicates a fierce career oriented person, with an agile, sharp and quick mind.

People who have Mercury in the Tenth House are not career obsessed, in a way you might think, but people who enjoy career challenge and a dynamic mental activity needed to accomplish their goals.

These people are brilliant, very precise and efficient, highly intelligent and optimistic. They know how to use their knowledge in a practical and efficient way, without wasting resources or energy.

They are oriented towards their career goals, but not tense about it; they see it in a good light and enjoy the process.

However, high social and professional status are what they aspire for. This desire and motivation usually originate from their past. These people start thinking about their career and future from an early age.

Over time, their ideas and goals become crystal clear, so they usually have a concrete idea about what they would like to become.

They mature pretty early, they are serious and eager to learn and widen their horizons. We could say that their motto is definitely the well-known saying ‘knowledge is power’. They have a sharp intellect and they want to use it the best way possible.

They like to read, write, research, study and learn, so they could use all the knowledge for a practical purpose. These people have no problem with taking up serious responsibilities and making big decisions.

They would feel very comfortable if they reach a leading position and a high professional status. Of course, field of their interest is always associated with intellectual engagement.

They need a job and a career that would stimulate their intellect and place new challenges.

Once they decide upon their career goal, they would enter the game. This is the greatest part about them; they do not waste energy on struggle, but take everything as a challenging game to play (and to win!).

Things that would have a negative effect upon these people, especially when it comes to work, are routine jobs and tasks. Anything that does not engage their mind and does not offer an opportunity to apply unique and original fresh, ideas would make them feel down.

However, if they find themselves in such a situation, they would cheer up and find a way to make a positive change.

Many people with Mercury in the Tenth House change their job more often than other people, until they find what suits them the best. It is not important only to be on top of things, but that the job satisfies the thirst for change, challenge, innovation and movement.

Energetic and determined, these people are also very tactful, analytical, systematical and patient. They are ready to sacrifice certain pleasures in life, in order to achieve their goals, if necessary.

Moreover, these people are pretty dominant in other areas of life. They tend to take up the leading role not only when it comes to career, but also when it comes to family and romantic relationships.

They could become very authoritative, especially in communication. They often tend to impose on others, which is a thing one should have in mind.

Mercury in the Tenth House – Synastry

Mercury in the Tenth House in synastry indicates a great mutual understanding, especially when it comes to the concept of needs. This synastry overlay naturally has to with career questions.

This position of Mercury in synastry indicates influence over partner’s career choices and professional goals.

Mercury partner would very likely have a great impact on the field owner’s attitude towards business and career, in a very positive way.

The thing that is the most important in this overlay is that partners will nurture mutual respect, admiration and trust.

Mercury in the 10th House – Transit

Transit of Mercury in the Tenth House is associated with public performance and success.

It is possible that one achieves success on a job or a task that requires public speech, public expression of certain ideas.

Communication skills would be the greatest ‘weapon’ to prove your qualities and talents. You will be able to pass on your knowledge to others.

On the other hand, it could happen that your current professional situation does not run smoothly, so you should seriously think about it.