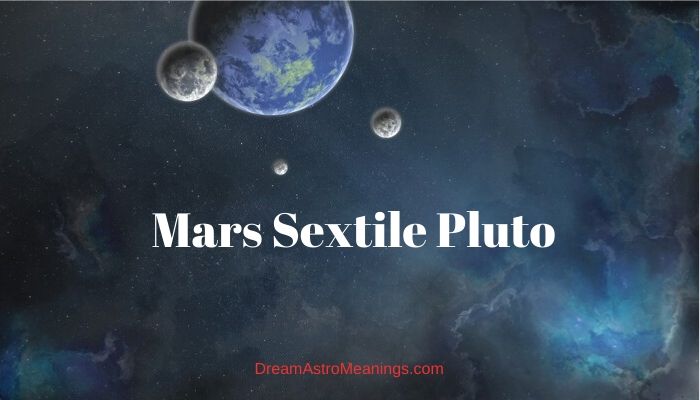 Astrology helps us determine the person’s traits and can even help us determine some possible events that might happen in this person’s life through deciphering the aspects of the planets in their natal chart and the aspects they are making.

Aspects represent the relationships between planets. Planets move constantly and during their travel they are interacting with other planets creating different aspects.

The strongest influence of the aspect is when it reaches the exact degree distance between the planets (ex. 60°, 0°, 180°etc.).

The main or major aspects are Conjunction, Trines, Squares, Sextile and Opposition.

A natal chart of a person consists of the planetary positions frozen in the moment of the person’s birth.

The aspects these planets are making can give a lot of insight about the person’s character traits, but also about their possible destiny and future events.

The main traits and events are determined by exact aspects of the planets in the natal chart.

Sextile belongs to the category of major or main aspects. It is a harmonious aspect and considered beneficial. It has qualities similar to the Trine aspect, even though the Trine has a more favorable influence.

The Sextile aspect enables the planets which form it to fully express their nature and best traits.

The Sextile aspect is an aspect of cooperation between planets. It is formed when two planets form an angle of 60° between each other (with up to 5°- 8° orbs). Sextiles are naturally formed between signs with complementary energy, such as fire and air, and water and earth element.

Sextile points out the areas of life where the person will experience good fortune, but because everything comes to them smoothly and with ease the person might develop a habit of missing chances for development, especially the development of their talents.

Unlike the people who don’t get many chances to prosper, these people have many opportunities they can choose from, which makes them lazy and creates a tendency to procrastinate, which in turn makes them miss chances and waste their time.

These people often end up not using their true potential and being less successful than people with much less opportunities to thrive.

It brings new things into the person’s life, especially if it is triggered by some transit, which enables the person to grow and expand.

This aspect in progressions and transits often announces some new people and energy entering the person’s life which will help their growth in some way.

The planet Mars, also called the “Red Planet”, is not a big planet. It is the second smallest, with Mercury being the smallest one.

Pluto is now considered a dwarf planet, because it is concluded that it doesn’t meet all the criteria to be considered a planet.

It is called the red planet because of its surface, covered with red iron oxide. That is why this planet appears to have red color.

Mars is similar to planet Earth. Some people believe that life on Mars was present in the distant past, and that Mars can be inhabited by humans in the future.

As with other planets, Mars receives the traits of the signs it travels through, and it takes around two months for Mars to travel through one sign.

Pluto is not a real planet, but a dwarf planet. Nevertheless in astrology, Pluto is one of the planets and its importance is great.

Its influence through its placement in the natal chart and in correlation to other planet is very important, especially for those with strong Pluto influence (born with Sun or Ascendant, or personal planets in Scorpio).

Pluto in astrology symbolizes the process of transformation, regeneration, and rebirth.

The energy of Pluto might be considered destructive, and often symbolizes destructive events or activities. Pluto is related to deep emotional experiences with transformational effect to the person’s character and beliefs.

The planet Pluto rules death, waste, rotting things, and similar matters. This planet is also the planet of secrets and mysteries and helps in discovering hidden truths.

Pluto’s placement in the natal chart reveals the area of life where the person might encounter intense power which can both create and destroy.

The creation or destruction might be the result of the person’s action, but also come from outside forces over which the person doesn’t have any control. Pluto’s influence often indicates something or someone that the person should let go of because it is blocking their progress.

Pluto initiates changes in the person’s life. The person might go through some tough times during this period, but the end will result in complete transformation of the person’s old beliefs and their life in general.

Pluto’s influence is not a pleasant one and is not for the weak of heart. The result is a rewarding experience.

Pluto rules matters such as control, dominance, and manipulation. People who have a strong Pluto influence might be prone to dominant behavior and manipulating others. They could also be prone to being dominated or manipulated by others.

Pluto teaches people lessons about the things they need to let go of and release from their lives. Pluto might be influencing the person to learn how to let go of their need to control and manipulate other people by imposing their will.

This influence might refer to teaching the person to release themselves from the controlling influence of other people. Pluto rules power and all situations where power is expressed.

Unlike personal planets, Pluto is a generational planet, and its placement in a certain sign influences generations of people boring during Pluto’s transit through this sign.

Its influence on a generational level reveals itself through some transformations which happen in society during this transit.

Transiting Pluto in aspects to natal planets often brings some major events with transformative nature into the person’s life.

Both Mars and Pluto carry a strong destructive energy within. Bad aspects of these two planets could create destructive and conflicting characters in constant search for battle, and could invite some devastating events in the person’s life with great impact on their future.

Sextile aspect between these two planets has a soothing effect and calms the energies of both planets, allowing the person to take the most from their best traits.

People with this aspect tend to be honest and they expect such attitude from people they communicate with as well.

They want people to speak the truth to them, regardless of how painful and horrible it might be. They are usually brave and not afraid to confront reality. They want to know where they stand rather than fool themselves with false hopes. They can spot a liar and someone trying to manipulate them at a distance.

That is something these people don’t like at all, but can sometimes be prone to doing that themselves.

Truthfulness is a much appreciated trait. They have a strong intuition and can easily spot the falseness of motives of other people. These people often have a suspicious nature and it is not easy to gain their trust. They are usually very trustworthy and try to keep their word.

This aspect gives the person a sharp mind and ability of deduction from all the given facts combined with strong intuition.

People with Pluto and Mars connected with a sextile aspect tend to be robust and have good health. They are usually physically active and work on developing their physical fitness. They are usually very passionate and love the intimate side of relationships.

These people are open about these subjects and prefer people who have the same approach. They tend to openly express this side of their personality and allow their energy to be released freely.

These people openly express their opinion about matters and they often don’t care much about other people’s feelings when they do that. Sensitive people can consider them rude and inconsiderate but that is simply their genuine nature.

If someone tries to deceive or hide the truth from them, and they become aware of that, they can be very unpleasant in expressing how they feel. Many will verbally attack the person who tried to treat them in such a manner.

People with Mars sextile Pluto might find it hard to forgive others for hurting them (although not as hard as people with bad aspects of Mars/Pluto).

They should work on developing their sense of forgiveness and tolerance to other people’s differences. They need to take into consideration the opinions of others and not try to impose their opinion at any cost.

Because Pluto symbolizes our soul and Mars our desires, in combination these two planets represent our soul’s desires and our actions towards manifesting them into our reality. The desires will be related to the areas of life where these two planets are placed in the natal chart.

People with this aspect of Mars and Pluto often have a desire to transform society in some way and break restrictions that the society is imposing on them.

These people don’t like anything forbidden and many of them have the need to break the rules because they don’t want anything jeopardizing their freedom and free will.

Some of them will have a tendency for obsessive thinking, especially in their relationships.

Fortunately because the sextile is a positive aspect it will prevent the person from behaving in an extreme manner.

This can also express as selfishness and tendency to whatever they please, regardless of the consequences. The main thing with this aspect is to learn how to control your lower urges.

The events will be related to the natal house where these planets are placed and can cause major changes and transformations in these areas.