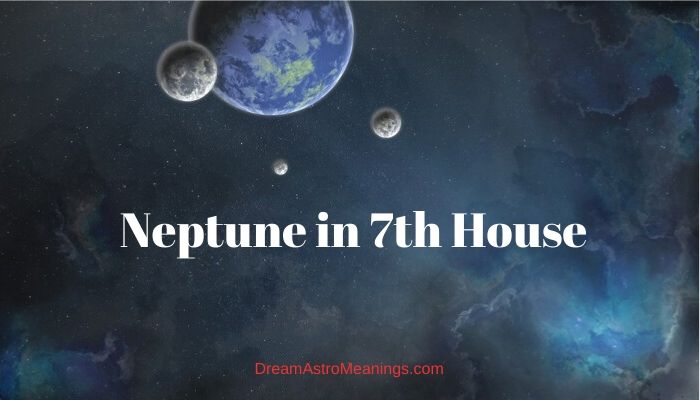 Where will my destiny lead me? What will happen to me on the field of professional success, marriage, family, talents..? Will I be a popular person, will I be successful, will my efforts pay off?

We all ask such questions at times; some of us more often, others on rare occasions, but they still do ask. Astrological charts could give us some answers and precious guidelines.

Natal charts are diagrams representing the sky at the moment of our birth. According to astrology, this unique pattern of the sky hides information about our past, present and future.

Now, when interested in particular fields of life, we should look into astrological houses in the chart. Each of these twelve fields represents an area of our life.

The Seventh House is traditionally understood as the House of Partnership. It is the opposite of the first field, one associated with the self and the Ego; thus, the seventh, as the opposite, includes all the relationships with another individual.

The seventh field is primarily about romantic relationships, but it encompasses all variations on one-on-one relationships. This is the field of contacts that were, one way or another, of a more intimate nature.

Such relationships are, of course, those between romantic partners, spouses, but also relationships between a doctor and a patient, a teacher and a student, an employer and an employee, depending on the case.

The seventh field is about contacts and partnerships of various sorts. It indicates stable and steady partnerships and collaborations, cooperation and reliance, but also the lack of any of it.

The Seventh House is the field of business contacts, contracts and deals, compromises and terms, lawsuits and litigations and else. The seventh field has much to do with publicity, public activity, public relations and generally anything that has something to do with the native’s public dynamics.

Interestingly, the Seventh House indicates also everything exactly the opposite of partnerships.

It is the house of rivalry, competition, opponents, public enemies and public enmity. Therefore, one could possibly recognize potential rivals or opponents through this field.

The Seventh House is about observation, attention and caution regarding relationships and contacts with other people. The seventh field could, in a way, predict if a contact was going to be fruitless and shallow, if the relationship will break or survive and so on.

The seventh field generally indicates what the native expects of partnerships, what was his or her idea of a perfect partnership, with the focus on a romantic one, but also all other types of partnership.

Therefore, one could easily see why the analysis and a correct enough interpretation of the Seventh House could be of much importance and of even more use.

Neptunus or Neptune was an old Roman water deity, whom we usually equate with the Greek god Poseidon.

Having in mind that these two deities had been identified one with another very early on; we could best understand the function and the place of this god in mythological systems assessing both mythologies and tradition.

The meaning of Neptune in astrology was not that transparently similar to that of the god.

Nevertheless, it is still useful to know some basics about this ancient deity. It is most likely that Neptune was first a god associated with freshwater and not the sea.

Theology behind Neptune could not be reconstructed that easily, because of a tight and early identification with Poseidon.

The festival called Neptunalia suggest people would celebrate the god as a deity of freshwater, the one who would provide enough water for people to safely live through the hot summer seasons, threaten by severe draught. This festival was celebrated in July, at the very peak of the summer.

The name of the god, Neptunus, has been debated on ever since. There were various etymological suggestions.

Some scholars suggest terms that associate the god with water and moist substances, then there were also terms that mean ‘marriage’ and ‘covering’. The study of Neptune’s name is a bit complex for our story, so we will not go into that.

Well, our planet Neptune is associated with the element of Water, so we will mostly stick to such associations.

As for Neptune’s origins and nature, let us see into his counterpart Poseidon and the Greek myth. Poseidon was one of the Cronus (Saturn) and Rhea’s children.

Cronus, the Titan, hated his children; he was afraid one of them would overthrow him, just the same way as he did with his own father, Uranus. It eventually happened, with Zeus (Jupiter) bringing him down.

Zeus shared the rule with his brothers Hades and Poseidon; Hades got the underworld and Poseidon – the sea.

Now, Poseidon or Neptune was not that happy with what he got. His character was described as unpredictable, hotheaded, tempered and violent. He was not a god one would like to enrage.

He caused earthquakes and sea storms, but would also protect sailors and decide upon the results of sea battles.

Neptune, thus, was understood as a sea deity. The lord of the sea, so call him, lived in a golden underwater palace. He had a chariot pulled by giant horses with golden manes.

They were so strong and fast that Neptune’s chariot would fly above the water, never touching the surface of the sea.

Although nothing explicitly connects Neptune with horses, Greek myth says Poseidon actually gave life to the first horse that ever walked this world! God Consus was probably reinterpreted as Neptunus Equestris.

Neptune is one of the modern planets, discovered ages after the first five planets of the Solar system; the other two newer planets are Uranus and Pluto. Well, they have all been there, but we could not see them.

Neptune falls under the category of transcendental planets and, as such, it is a higher octave of the planet Venus. Neptune is the planet of dreams, illusions and fantasy, amongst other concepts.

It does not have much to do with the water deity Neptune, except for the very element of Water. The planet Neptune is very perplexing and its influence was not violent and raging like that of the sea lord, but very, very subtle.

Many authors would say Neptune does not play a particularly important role in natal charts, since it was a slow and generational planet, meaning it affects generations of people, not the individual alone.

However, its subtle influence could be seen in people with an incredibly poetic mind and soul, those spiritually inclined and those inclined towards healing. Neptune is the planet of artists and healers, priests and poets.

This is the planet associated with dreams and illusions, mysteries and lies, with deceptions and fraud.

True, if its influence was too strong, it masks reality, it makes it very difficult to see through the veil of dreamy lies. On the other hand, were there any lies or was it real?

What was the lie in the first place’ Neptune would catch us it its net of mysteries, if we surrender. Too much of it could be dangerous, but a little bit of it could be a cure to one’s soul.

Neptune rules the sign of Pisces and you probably know that Pisces were the dreamiest, the most poetic and elusive sign of the zodiac. Drowned in the realm of dreams they are.

Neptune is a powerful spiritual guide, the planet that wants the soul to be free from the material world. Let us see how it feels in the house of relations and partnerships.

Neptune in the Seventh House – Neptune in 7th House

Neptune in the Seventh House indicates a relationship in which the native gives of him or herself much more than he or she receives from the other side.

This usually applies to romantic relationships, marriage included. The native wears pink eyeglasses and indulges the partner, without asking anything in return.

Well, let us inspect this. In a healthy relationship, one should not ask anything in return, because the process of giving and receiving goes in both directions, naturally.

However, not all relationships were like that. The thing is that Neptune in the Seventh House might veil the truth and the reality of the partner.

The native continues giving everything to the other side, investing him or herself to the fullest, blind to recognize exploit and manipulation or simple indifference. The native has a problem with idealizing the other side or being too trustful.

The native has a very strong need for a mental and an intuitive bond, something otherworldly.

While the native’s own intuition should serve to recognize potential danger, the idealization that comes from established values and expectations of a partnership easily masks everything.

The native does not perceive the partner the way he or she was, but the way the native wants them to be.

This is a very tricky position and the same pattern could be seen in relationships other than romantic ones; in different types of partnerships. Is there a solution to the deceptive Seventh House Neptune?

Of course there is. If your chart was in favor with this position these things would very likely come naturally. If not, here is what you should pay attention too.

People with Neptune in the Seventh House tend to idealize others and fail to see people the way they were.

They invest much in such unrealistic relationships, giving too much, while the other side either takes an advantage of the idealist with Neptune in the Seventh House or feels confused, indifferent, even guilty for not actually being the person expected to be.

The native with Neptune in the seventh field has to learn the difference between the ideal image and reality.

Moreover, he or she has to accept the reality, which is, of course the hardest part. It requires discipline, limits, even discrimination when it comes to choosing partners and setting boundaries.

It applies on all types of relationships, but, first of all, romantic ones that tend to be the most easily distorted, since too intense feelings were involved.

Do not give over your power to another person, regardless of how much you love him or her. Do not invest everything in your life into that person and that relationship alone; you will definitely get lost. Influenced by Neptune, you very likely have a good intuition, so use it.

You also have a talent to get the best out of the person, but do not fail to accept that some people do not present with those qualities you expect of them.

Keep your power to yourself. Now, this does not mean you should go to the other extreme, become suspicious about everything and trusting nobody.

All Neptunians need to awake their common sense, because they are easily seduced by dreams and ideals.

With Neptune in this field, you should turn your common sense on, each time you are getting involved in a partnership, regardless of the type, but especially a romantic one. Trust your intuition and employ your common sense.