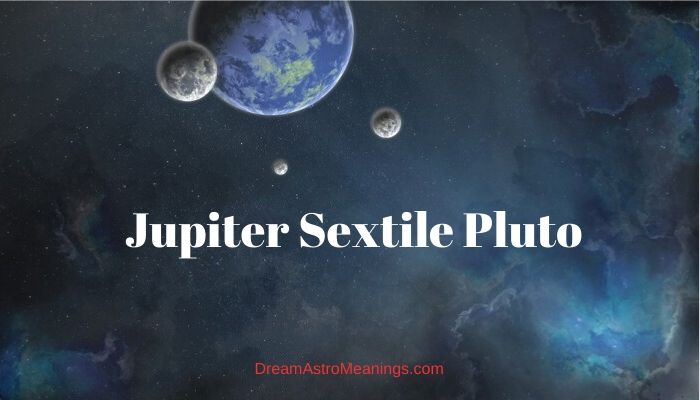 Astrology is an ancient discipline which determines personality traits and tries to figure out future events in the person’s life by deciphering the positions of planets and their aspects in the person’s natal chart.

Aspects are relationships between the planets in a natal chart. Planets are in constant movement and they interact with one another.

In a natal chart, the aspects are fixed position of planet’s relationship during the person’s time of birth.

These aspects have a strong impact on the person’s life and their personality. The main aspects are Conjunctions, Squares, Trines, Oppositions, and Sextiles.

Exact aspects between planets are responsible for the main traits and main events in the person’s life.

Sextile is an aspect which is considered beneficial. It has similar qualities to the Trine, although the Trine has even better influence. The Sextile allows the planets which form this aspect to express their best nature and full potential.

It enables the free flow of the planet’s energy unlike some bad aspects which create obstacles and don’t allow the planet to show its best nature. This aspect promotes co-creation between planets.

This aspect forms when two planets are 60 degrees apart from each other. This aspect has tighter orbs than other aspects, and a deviation is tolerated for up to 5 degrees.

Signs that form natural Sextiles are in different elements, but complementary ones, like fire and air signs, and water and earth signs.

For example, natural Sextile exists between the signs of Aries and Gemini, Leo and Gemini, Libra and Leo, Sagittarius and Libra, Aquarius and Sagittarius, Aries and Aquarius, Cancer and Taurus, Virgo and Cancer, Scorpio and Virgo, Capricorn and Scorpio, Pisces and Capricorn, and Taurus and Pisces.

The Sextile aspect is responsible for the person’s talents, usually ruled by the planets and signs involved in this aspect.

This aspect can sometimes be contra-productive because it makes the person lazy and lacking ambition since they have things coming to them instead of them needing to put in the effort to get these things.

When activated, this aspect brings new things into the person’s life. It indicates opportunities and potential for growth.

It often announces entering of some people in the person’s life which can help the person in some way.

Jupiter is considered the biggest planet in the Solar system. Jupiter is mostly hydrogen and lacks solid surface. The name Jupiter comes from the name of the Roman war and sky god, called Jupiter. Jupiter was the king in the Roman’s pantheon of gods.

This deity was considered main deity among the Romans, until Christianity overpowered paganism and replaced old pagan deities and beliefs.

Jupiter was considered a very beneficial planet since ancient times. This planet ruled wealth and good fortune and was thought of as the great benefic comparing to other planets.

Jupiter well placed in the natal chart and creating harmonious aspects was the sign of good fortune and announced the person would be wealthy during their life (or parts of life, depending on other aspects and planetary positions).

This could sometimes be the planet of exaggeration and overindulgence. It rules nobility, higher knowledge, universities, professors, higher education, spirituality, literature, studying, etc.

Jupiter rules the sign of Sagittarius and its exaltation is in the sign of Cancer. When placed in these signs, Jupiter is very powerful and its good traits are maximized (providing that it also has good aspects with other planets, especially the personal ones).

When it is placed in the sign of Capricorn, Jupiter is in its fall, and the energy and power of this planet is lowered.

If Jupiter is well placed in the natal chart, the person usually gets great opportunities to progress and gain financial stability. It gives the person protection in their financial dealings and affairs.

Badly placed Jupiter is not a horrible thing to have in a natal chart (not always), and is usually responsible for a lack of fortunate opportunities for progress and making money, and gaining wealth.

Those with poorly placed Jupiter often seem to be lacking opportunities and good fortune to make the most of their abilities, and often struggle more than others to create a secure financial future.

This planet is a social planet, unlike the personal planets Sun, Moon, Mars, Venus, and Mercury.

Social planets have more influence generationally and affect a lot of people, and that is especially true with the planetary influence placed in a certain sign because that tends to affect all people born during the planet’s transit through the same sign.

Also, aspects with slower moving social planets tend to affect generations rather than individuals, but it all needs to be viewed through the person’s entire natal chart.

In this case, Jupiter’s placement in a certain sign and house of a natal chart, as well as all the aspects it makes should be considered during the interpretation.

Pluto is a so-called dwarf planet, but its importance is great. It was the last discovered planet (in 1930).

In western astrology Pluto has great significance. Its influence on other planets should not be neglected. This planet symbolizes rebirth, regeneration and transformation.

During important transits and progressions, this planet can completely transform an individual who has a prominently placed Pluto in their natal chart.

Pluto’s energy is destructive, and symbolizes destructive activities and events in life. This planet is a symbol of death, putrefaction, waste, etc. It gives a person deep personal insight. It also helps discover hidden truths and secrets.

The place where Pluto is placed in the natal chart demonstrates the area of life where the person will confront intense powers responsible both for creating and destruction. These can be caused by the person itself, or by outside influences which the person doesn’t have any control over.

This planet is a provoker of changes in the person’s life. The circumstances caused by Pluto influence might become overbearing for the person, but the result will be a complete transformation of old beliefs and life in general.

The person might hit bottom during these times, and the weakest might not be able to pull through. The stronger ones will live to see the benefits of Pluto’s influence.

The planet Pluto is also related to subjects such as dominance, manipulation, and control.

Person under Pluto’s influence might have these traits, or they might experience them from someone in their life.

Pluto can teach the person many lessons, and learning how to let go of the need to control and manipulate others, or release yourself from someone’s manipulative influence, could me some of the lessons. Pluto is the ruler of power expressed in different levels and situations.

Because it is a generational planet, Pluto in a sign describes what approach does a generation of people born with Pluto in the same sign has towards making some transformational changes in society.

Transits of Pluto in the natal chart will bring some major transformational events for which the person isn’t always ready. They come without warning and leave the person completely changed.

Pluto’s transits are especially important for people who have a strong Plutonic influence in their charts, such as people born in the sign of Scorpio, Pluto in strong aspects to ruling planets, Pluto on the ASC/DESC cusp, etc.

Pluto often reveals the areas of life where the person needs to let go of something or someone to be able to move on with their life.

The planet Jupiter in Sextile with Pluto gives the person a strong desire to make some changes in the world. These people possess a lot of knowledge and want to use it for the benefit of their society.

A person with this aspect is usually interested in areas such as religion, politics, philosophy, and sometimes music.

They have a leadership quality and ability to be reformers and organizers. They often have the need to transform outdated things in the society, like some old beliefs, systems, or organizations.

They instill confidence and feeling of trust in the masses. These people are often popular and charismatic. People often consider them as example they look up to. They are often in a position to gain large amounts of money and become substantially wealthy.

This aspect often indicates profit from investments in new and insufficiently researched areas.

These people have a talent for inspiring other people to succeed. They often spend their money for a common cause that will help humanity in some way.

Some of people with this aspect have a strong need to develop their psychic powers and intuition.

Many of these people have a philosophical approach to life and they always try to understand the reasons behind the things they are experiencing.

These people can be either very religious or atheists. They have an optimistic outlook on life.

People with this aspect are often avid travelers and enjoy traveling to distant and mysterious places and meeting new cultures that not many people are acquainted with.

The changes will come naturally improving the person’s life.

This aspect might mark the growth of the person’s wealth, influence, knowledge, popularity, or represent increase in some other areas ruled by these planets.

This aspect in transit might also indicate the period of spiritual growth of the person. It could also be a sign of professional advancement and promotion.

In some cases, this transit might indicate financial gains and profit from past investments. It is a sign of gains and optimism.

Sometimes, this aspect might indicate meeting someone with a charismatic personality, and possibly wealthy which might help you transform and improve your life, or provide you opportunities to increase your wealth and financial stability.