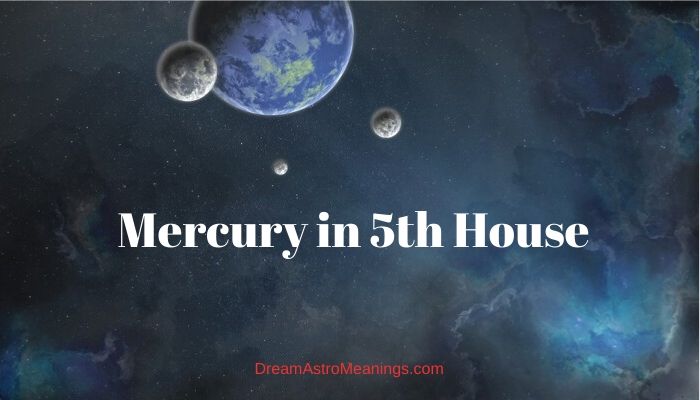 Our lives are unique stories. Astrology tries to unfold the roll of our fate, by analyzing our birth charts.

If you really want to learn about your destiny, you have carefully to examine each element of your birth chart and to take it as a piece of a complex picture that represents your life.

Isolated elements do not tell the whole story, which is something one should always bear in mind.

Each chart is very different, so basic interpretations should be used only as guidance.

Mercury in the Fifth House is a piece of information that would make perfect sense if taken along with all the other elements from the chart.

Each planet has its place within your natal chart; together, they write the story of your life.

Each additional detail would affect the other one. Individual charts require deep insight and interpretation.

Houses are twelve fields within the astrological circle you could see if you look at your natal chart. Each house stands for a segment of life, the aspect of our life experiences.

Depending on planets inside houses, we would experience an area of life in a particular way.

Planets and aspects they form would decide upon that. Astrological houses are very important part of every chart and of each astrological reading.

The Fifth House in Astrology

The Fifth House is associated with emotions, love and progeny, but also with our sensuality, creativity and imagination. This field represents our inner creative soul, with an emphasis on art.

Therefore, many activities that tend to be risky and impulsive have to do with the Fifth House; lottery, gambling, risky investments, shady business, for instance.

Although the Fifth House is generally associated with pleasant events and experiences, bad aspects could turn it upside down. Fraud, trickery, adultery and other inconveniences, small or serious would have to do with it.

This field also presents with another very interesting layer of interest. The Fifth House is associated with tendencies towards the otherworldly, spiritual, abstract and divine.

Mercury or Hermes was the cleverest and the most agile of all the gods of ancient Greek and Roman pantheons.

Hermes was a messenger of gods, associated with trade, communication, trickery and cunningness. He was the patron of young people, of travelers, inventors and traders, but also of thieves and tricksters.

The cult of Hermes was overtaken by Romans; they worshiped the same deity under the name of Mercury.

In Ancient Rome, Mercury was the god of trade and gain. Mercury or Hermes is usually depicted as a handsome, lean young male wearing a winged helmet and sandals, needed for his messenger’s activities.

In astrology, Mercury is the planet of communication, logic and practical mind, the planet of verbal expression, transport and travel, education and everything associated with our reason and rational mind.

Mercury in the Fifth House – Mercury in 5th House

Mercury in the Fifth House indicates a very strong potential for an additional build up and enrichment of the intellect through creative abilities. Mercury in the fifth House makes for a wonderful combination of creativity and intellect.

People with Mercury in the Fifth House are very creative, theatrical, gifted, especially in terms of verbal expression. They commonly have an exceptional talent for writing.

They are quick minded, intelligent, but mostly inclined towards fun and adventure. They are not easy to catch, because they are always on the go. They are flirty, funny, witty and charming.

These are the lightest of zodiac representatives, always fresh and very positive. They are restless and playful and they love kids. They themselves are children at heart. Mercury in the Fifth House makes one very youthful.

These individuals are very imaginative and creative. They use their talents and creativity in every aspect of their life, including the professional field. Even if they do not have an especially creative job, they would make it creative.

In order to function, they need to transform everything into fun and a creative process. This makes their experience of life colorful and pleasant.

If Mercury in the Fifth House was in some challenging aspects, it could make them problems. Unhealthy attitude towards children could take place. They could be exhausting to have around, because they talk all they long, which could be pretty boring and unpleasant.

However, if Mercury was in favorable aspects, they bring in good mood, cheer everyone up and share some rather amazing experiences.

Children with Mercury in the Fifth House are very intelligent, which shows up early on. They love to learn and school is not boring to them. They usually start talking at a very early day. They easily pass all the levels of education.

It also must be noted that Mercury in the Fifth House may indicate having more than one children or having twins.

Mercury in 5th House – Life is a Theatre

Mercury in the Fifth House gives an individual of an exceptionally creative mind. This personality easily stands out of the masses. The native tends to be theatrical, eccentric, different from the majority and very extravagant.

These individuals are eloquent, with impressive communication skills. They really know how to present the subject, so the stage is where they feel at best.

They would easily transform any place into a stage. They are charming and likeable, so people love to listen to them. Moreover, they really know many things and have a fantastic sense of humor.

They also enjoy debating, having a very logical and practical mind. They are self-confident and they could turn any debate into a theatrical performance. It must be said, though, that they come up with solid and clever arguments.

Since they also have a touch of an artistic genius, they are capable not only presenting their case verbally, but they could evoke it like an actor would do. Acting is a perfect occupation for those people.

Fifth House Mercury individuals are versatile. They are usually inclined towards both science and art. They could look at the world from both perspectives, convinced that both are necessary in order to understand the world.

Their intuition tells them that science explains many things and offers solid answers to many questions, but that the real essence of life could be understood if you add an artistic sense to it.

Science offers concrete answers, but art gives them a something more, affecting human psyche and soul by its sublime essence. These artistic tendencies open doors of the perception of life in a profound, metaphysical way.

For people with Mercury in the Fifth House, intellect and imagination go hand in hand, which is a very deep and a highly inspirational view on life.

Having a creative intellect is the key to understanding the life as it is. Moreover, it is a key to enjoy it. Besides their incredibly creative intellect, these people are very optimistic and positive ones. Others can easily feel it.

Their aura is pure light, refreshing as a spring breeze. However, there is also something royal in their appearance.

Self-confidence, optimism, attractiveness, some fancy outfit and a bright smile make everyone fall for them. In addition, they are easygoing, friendly and very approachable; they are not arrogant, but extroverted and generous.

These people are quick minded and passionate when it comes to defending their opinions.

They would not attack or try to insult you while doing so. However, it must be noted that their Ego often comes into the first plan. They like to be in a position to impose their authority. They like to be liked, admired and adored.

Overall, they are very charismatic and open. It depends on the aspects and additional elements how much this authoritative trait would stand out.

Mercury in 5th House – Irresistible and Hard to Get

When it comes to love life, this native is irresistibly charming, flirty, eloquent and charismatic. Their language is sweet, their passion burning. However, despite of being flirty and open, this native is not easy to win over. In fact, it requires great effort and persistence.

These people are demanding and they would wall for a person who would stimulate them mentally. They need a person on the same intellectual level, which is quite high.

These natives are attracted by emancipated, intelligent and educated individuals; they do not fall for a pretty face alone. When it comes to relationships, they usually pick younger partners or those who appear youthful and have a youthful, vivid and lively spirit.

Those who are eager to learn and to enjoy life with them. These natives are generally open about their emotions. They would openly tell you about their expectations, desires, planes and needs regarding living as a couple.

They do not like secrets and avoidant behavior. If they were unhappy with you, they would tell you. When it comes to showing love and affection, they tend to be very natural, spontaneous, gentle and open.

Since they are very intelligent and artistically inclined, they would express their love in a most passionate and a creative manner.

It is interesting to note that these natives often take up the dominant role in a relationship.

They have the tendency towards control over the romantic scene. They would never accept an inferior position, as they see it, but they tend to take up a leading part. In addition, they often have a strong pedagogical gift.

There is a great chance that their progeny present with impressive successes in the field of education. Natives with Mercury in the Fifth House are likely to have many wonderful opportunities to be proud of their own success, often through their offspring, which could be a truly fantastic destiny.

Mercury in the Fifth House – Synastry

Mercury in the Fifth House synastry overlay mostly has to do with creative inspiration and children upbringing. If your Mercury was in the partner’s Fifth House, it will have a very positive effect.

Mercury enlivens the owner of the field. Mercury would be like the sun for the field owner, bringing in positive vibes and liveliness.

It would be the same the other way around. It is a lovely overlay, because each partner feels relaxed and cheerful about the time spent together. There is no boredom, no tension between these two.

We could say that Mercury and the Fifth House ideally match, when it comes to romantic synastry. Moreover, you would enjoy having kids and taking care about them and educating them together.

Mercury in the Fifth House in transit is associated with speculation, education and indisposition.

Thought may wander around, usually concentrated to a someone close, a lover or a partner. Trickery and gambling are associated with this transit.

It would be good if this nervous energy were used for educational purposes or simply for widening your horizons and inner world. Reading could be a perfect activity for this transit.

Many people are likely to be interested in you and in need of having you around. During this transit, it is likely that one would talk more than he or she would actually do.

This is a tricky transit, indeed. It is also associated with sports’ activities that require precision. Overall, this transit is lively, though it does not appear particularly fruitful.