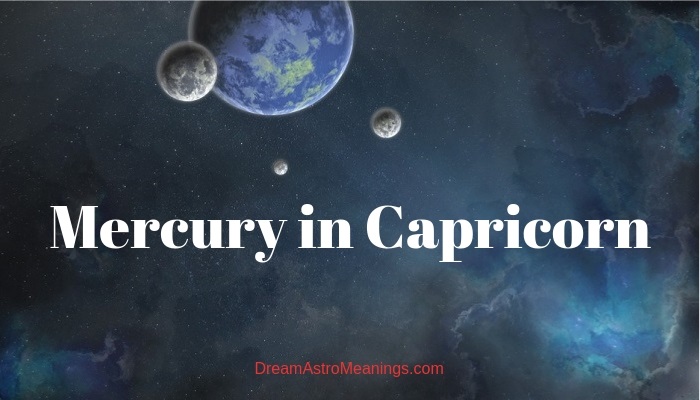 The planet Mercury is the smallest in the entire Solar system.

This planet never distances much from the Sun, and it takes around 88 days for it to orbit the Sun, spending 7.5 days on average in each sign of the Zodiac.

Because of this, Mercury can rarely be seen without the aid of a telescope, and it can be seen only in particular parts of the year.

The planet Mercury rules the signs of Gemini and Virgo. It has the greatest power while transiting through these signs.

In the article we will give you some general traits of the planet Mercury in the sign of Capricorn, and how it affects people born with Mercury in this sign.

Men born with Mercury in Capricorn (like women with this Mercury placement), often appear distant and rigid to the people from their surroundings. People consider them non-adaptable and they usually are like that.

They have a need to get to know people or some environment well, before being able to relax.

These men have the need to determine all the details of a situation before making their decisions regarding that situation. They take their time and focus on different facts, thus ensuring accurate and precise conclusions.

Many people consider them overly detailed and even boring because of their need to gather as many details as possible and use them in their thought process.

They are very organized and they tend to keep order in all aspects of their life, especially in their mind. People who are disorganized and unfocused get on their nerves and they refuse to be around such people. What these men appreciate the most are responsibility and organization, and love to be around people with similar traits.

They think well before speaking or writing their opinion. They want to prevent any chance of people getting their intentions wrong. They also try to make their intentions as clear as possible because they don’t want people to misunderstand them.

These men often love history and know much about it. If they become writers, they often choose to write historical novels or history books in general. History and tradition fascinate them, so they tend to learn much from them, and act accordingly.

Because of their preferences and their conservative and often rigid attitude, many people consider them uninspiring and not fun to be around.

Their attention to details and organizational skills make them perfect for any kind of job where there are a lot of facts which need to be taken into consideration, as well as jobs which require any kind of organization.

They can often be overly critical and even judgmental towards people who don’t meet their standards, and usually don’t behave the way they expect them to. These men need to learn to become more tolerant of other people’s differences and points of view.

While they allow themselves to criticize others, they usually don’t allow any kind of influence on their beliefs and attitude. These men have a hard time accepting they are wrong at anything, and they don’t like being criticized.

Like women with this Mercury placement, men have prominent practical skills as well, and have a gift of making decisions which have a practical outcome for everyone involved. Their ability for spotting details and weaknesses is often handy to prevent bad consequences although people often consider them negative because of that.

A woman born with Mercury in the sign of Capricorn has similar traits to a man born with this placement. These women are super-organized and never miss a detail.

They can exaggerate with the number of details they take into consideration which often causes them to be slow when making decisions, and worse, while performing some work tasks.

Usually, only good comes from their detailed approach, but it is a fact that they are prone to wasting time on things which often don’t have much significance.

Like men with this placement, women with this Mercury placement can also appear distant and rigid. They have a dignified attitude and watch carefully their words and expressions.

These women are classical types, and prefer classical literature and traditional values.

They prefer the company of people who also have similar interests and values. They don’t like people who are irresponsible and disorganized because their attitude is completely opposite.

These women often appear serious in their relationships with other people, especially their coworkers and neighbors. They are usually not emotional and are rather rational. They need to have all the facts processed before speaking or taking some action. They don’t like being wrong or making mistakes and they do all they can to avoid such situations.

These women are thoughtful and make sure no one suffer damage from their actions and decisions.

On the other hand, like men born with Mercury in Capricorn, they also can be prone to criticizing people and being judgmental of people’s behavior and actions.

They also have their own rigid set of rules they make themselves follow and expect others to be following them too. They need to learn to become more tolerant and flexible to other people’s differences and let people behave as they feel.

Although they are prone to criticizing others and judging them, these women often have a hard time accepting others criticizing them and giving them remarks on their behavior or actions.

They need to learn to accept the possibility of them making mistakes and being ok with accepting these mistakes, and even apologizing if needed.

The bad traits of people born with Mercury in Capricorn are:

tendency to make general conclusions about the experiences they had, labeling people and relationships, proneness to criticizing and judging people based on their own criteria, rigidity, strict attitude and beliefs, not very emotional, intolerance to other people’s opinions, doubtful, controlling, serious, not adaptable, hesitant towards changes and accepting new things, problem accepting criticism and admitting they have made a mistake, etc.

People born with the planet Mercury in Capricorn have a rational approach towards matters ruled by this planet. They tend to put different labels (self-made) to the people they interact with as well as the relationships they have with them, and judge these relationships and people based on these labels.

Their minds are very organized and they usually have the need to gather their impressions from some event or activity and make a general conclusion about them before proceeding on with some new activity.

The sign of Capricorn colors the traits governed by the planet Mercury with its traits. That is why people born with this placement are steady and calm, especially while speaking and interacting with people.

They don’t like people who are rash and disorganized and they mostly appreciate order and organization.

These people are not very open in their communication to people and their relationships with their surroundings, their siblings and neighbors are not very emotional. They don’t find it easy to relax and open to people, and often appear very serious and strict.

Their rigid appearance often keeps people from wanting to approach them or become closer.

Their need for order and structure has problems when they encounter a lot of information they need to process and make some sort of conclusion about them. They also take some time before making decisions because they want to make sure that they have considered all the details.

These people have a very practical approach to using their mental activity. Only a practical idea which comes out of using their mind is a useful one and worth thinking about. They are gifted with a gift of making clear and accurate judgments using the available details.

They often appear strict and rigid about their beliefs, and don’t allow anyone to influence them. If someone opposes their opinion they tend to mark that person as someone not worth their time and effort.

This kind of attitude is not serving their good and they should consider changing it because people could start avoiding them because of their rigidity and intolerant behavior towards diversity.

A person with Mercury in Capricorn is often judgmental and prone to criticizing others for not meeting their self-created standards.

They can’t accept others not being able to understand their point of view. They are very detailed and don’t like superficiality in any form. They tend to be skeptical about the outcome of their activities as well as other people’s activities and they always need to make sure they have absolute control over matters.

These people need to double check all information from various resources because they have a tendency of doubting.

Because of their well-organized nature, these people don’t like to waste their time and spend as much as needed to get things done.

They often have a precise and concise way of speaking. They make sure they use the right words to say exactly what is on their mind. They don’t want to be misunderstood by others or appear ignorant, so they pay a lot of attention to their appearance and words while speaking.

The effort put in before they make their statement gives these people a great amount of confidence. People usually don’t like the way they present matters, but they usually trust their words without checking because people trust their serious approach.

When they communicate through messages or emails for example, these people tend to be short and concise, to avoid the risk of potentially confusing the reader of the message.

These people are sharp observers and able to gather many details in a short time, but they can sometimes be overbearing to others for being overly thorough in their activities.

Regardless of how boring it might sound or appear to people who are not as detailed as they are, these men know how to discover the weak points in any matter and thus prevent faults from happening.

Because of their tendency to spotting the frail parts of a subject many people consider them prone to negative thinking and expecting bad results, but they miss to see the broader picture, where these people use their abilities to prevent negativity from happening by spotting the weak parts.

They are not very adaptable and usually make other people adapt to them.

These people are usually very traditional and dislike people who are not. They are also hesitant to accept new things and people in their lives. People born with Mercury in Capricorn are often great fans of history and have a great knowledge of the subject.

People born with Mercury in the sign of Capricorn are focused and well-organized. Nothing misses their eye and they use the facts they gather to make the best possible decisions concerning everyone involved.

They can have rigid beliefs and be intolerant to other people’s differences, which is a trait they need to work on changing.

These people are detailed and precise, and they take their time before taking actions. They can be prone to giving negative remarks and finding flaws in everything.

That can be good because they prevent bad consequences, but it also causes people to consider them negative and not a pleasant company to be around.

These people are usually classical types with traditional values, and unconventional behavior might surprise and often disgust them.

One of their worst traits is being prone to judging other people’s actions and behavior and criticizing them, without accepting criticism on their account.