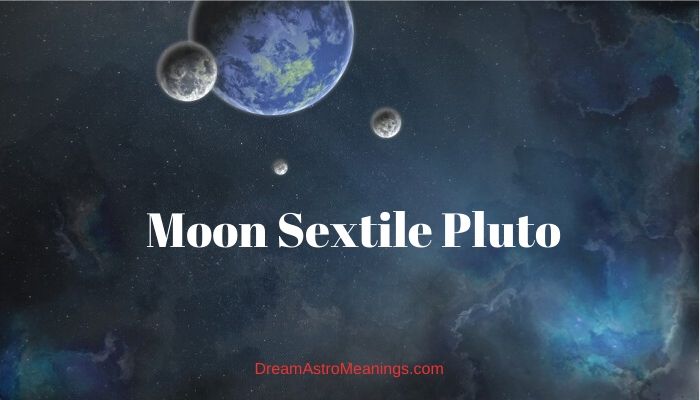 Astrology is a practice of determining the person’s character traits and possible life events through analyzing the placements of planets in their natal chart as well as the aspects they are making.

Aspects are relationships the planets are making between each other during their movement in the sky.

In the natal chart, aspects represent the relationships between planetary positions in the moment when the person was born.

Aspects are very important for shaping the person’s traits as well as signifying some important events in their life, especially if they are exact.

The Sextile is a good aspect with harmonious nature. This aspect is formed between two planets which are 60° apart from one another. The tolerated deviation is around +/- 5°.

The Sextile aspect allows the planets connected with this aspect to express their best nature and energy fully. It also enables cooperation between the energies of these planets. Because of its beneficial nature, astrologers consider this aspect similar to the Trine.

Sextiles form between signs of complementary element, such as fire and air and water and earth. This aspect acts in a way that enables the planet demonstrate their full potential and also enables the planets to co-create and the person can get the best of both planets and their effects.

This aspect is responsible for the talents and skills of the person. These talents are usually related to areas ruled by the signs or houses where these planets are placed.

The thing that is not so good about the Sextile aspect is that it can sometimes provide the person with many choices and opportunities, which makes the person lose ambition and will to take action and go after their desires.

They begin thinking that another opportunity will pop-up if they lose the previous and that can lead to laziness and tendency to procrastinate and waste time.

People with a lot of Sextiles and overall good aspects between their planets often waste their potential because they don’t need to take much action to get what they need and desire.

Transiting Sextile aspects often bring new opportunities and chances for the development of skills and talents.

Such transits can often indicate people appearing in the person’s life which can help them accomplish their desires or develop and use their talents.

There are different ideas about the origin of the Moon, but it is generally believed that it is 4.5 billion years old, and formed not long after our planet.

The Moon rotates around the Earth in a way that only the same side can be seen from Earth while the far side can never be seen from our planet.

First humans that went on Moon were USA astronauts in a mission performed in 1969. The last mission was in 1972. and after that year there were no reported human missions on this astronomical body.

The Moon also represents the way the person is dealing with their problems and issues they encounter on a daily basis.

In astrology, the Moon symbolizes women, our mother, and our motherly instincts. This planet represents female energy and reveals how much we identify with our female side.

The Moon in our natal chart reveals how open-minded and spontaneous we are. It symbolizes nurture and care, and reveals the level of our protective instincts and ability to provide for our needs as well as the need of the ones we care about.

This planet symbolizes comfort and our home and its position in the natal chart reveals how much comfort we have in life. It also rules creativity and personal expression.

The Moon rules intuition and the ability to foresee things. It rules our emotions and mood.

People under the strong influence of this planet are often accused of moodiness, often without explainable reasons.

This planet symbolizes our beliefs and prejudices. It rules spontaneous reactions and instinctive activities. The Moon rules our past and memories, and can be responsible to holding on to the past and the hurts we have experienced.

The Moon has the strongest influence on people with prominent Moon in their natal chart, usually those with Moon as their ruler (of their Sun and/or Ascendant), or they have Moon placed on an angle in the natal chart.

People under the influence of Moon are often very emotional, nurturing, adaptable, and protective of others. These people are often prone to mood swings and irrational reactions.

The house where the Moon is placed in our natal chart and the areas it rules usually describes where the person feels most comfortable and relaxed.

Since 2006, Pluto is officially a dwarf planet, because it lacks some of the basic traits of a real planet. This planet is very important in Western astrology.

It is the symbol of our soul, transformation and regeneration, death and rebirth. Important progressions and transits of this planet or to this planet can transform the life of a person, especially those who have Pluto as their ruling planet.

The energy of Pluto is transformative, but also violent, aggressive and destructive. It transforms using destructive methods.

Sometimes these traits are present in the character of a person with strong Pluto influence. Sometimes this refers to events of Pluto nature that the person will likely experience during lifetime.

People under the influence of Pluto usually have a strong intuition and easily discover the truth about matters. They easily recognize when someone tries to lie to them or deceive them in some way.

Even when they don’t seek the truth it somehow finds its way to reveal itself to them.

These people easily discover hidden truths and secrets. They somehow know the truth in every situation.

The house where Pluto is placed in the natal chart, reveals the area of life where the person will most likely encounter intense and powerful energy which can transform their life in some way, either create or destroy something.

These are often situations beyond the person’s control.

Pluto is often an indicator of major life changes that can transform the personality or the person’s outside circumstances. After these changes the person is usually not the same as before.

The changes and events Pluto is provoking are usually hard to go through and can be very dramatic and often disturbing for the person.

This planet is often related to matters like control, manipulation, and dominance. Pluto can either make the person exhibit these traits, or make them prone to being manipulated and controlled by others.

Pluto is the ruler of power, which can be expressed in various ways. Pluto is also a generational planet and it has a strong influence on social events and generational changes and transformations.

People born with Pluto in the same sign will focus on making changes in the areas ruled by the sign where Pluto is placed. Pluto transits usually cause major transformational events which change the person’s life completely.

People with Moon Sextile Pluto are intensely emotional. These people are very sensitive and their emotions are deep.

They feel other people’s emotions and usually form strong emotional bonds with the people that are close to them, like family members and their partners.

These people might be easily influenced by the feelings of others, and they can be prone to quick mood changes.

They can fluctuate from happiness and excitement to depressed feelings and sadness. They can absorb the feelings of others, and their unhappiness and negativity seem to cling to them fast. They are easily influenced by other people’s happiness and optimism.

People with this aspect have a personality which often has a magnetic influence on others. They have a powerful intuition and instinct which they use as the most important advisor in various situations.

These people can be prone to obsessive thoughts and emotional attachments to people. They are often involved in some kind of emotional drama where they play the lead role.

When they attach emotionally to someone, the attachment is very deep, which is why the find it hard to separate from this person.

With Pluto and Moon combination emotional separations and emotional hurt can often be a topic, and the person must learn to detach from something or someone that is no longer serving a purpose in their life or it represents a burden.

This aspect between Pluto and Moon could make the person able to manipulate people. They are very persuasive and people instinctively listen to them. They are interested in secrets and mysteries, and often possess psychic abilities.

Astrology and hidden knowledge is usually interesting to them.

Sextile between Pluto and the Moon often indicates a strong motherly figure which can be prone to control and manipulation. The person’s lesson might be to learn how to respect this figure in their life and accept their authority rather than confront them.

These people can also be very dominant and express their dominance in their close surroundings. Some of them have the ability to dominate others only using the power of their will.

It is important for this person to realize their strength and control the urge to use it to manipulate others in some way.

This aspect creates people who are overly sensitive and easily hurt. The fear of getting hurt causes these people to build a shield to protect themselves.

They can be prone to projecting their emotional expectations on others and become disappointed if they don’t receive the expected emotional answer, which in turn causes anger and conflicts.

They need to learn to accept other people’s differences and their right to react accordingly to their nature and not adjust their reactions to the Pluto Sextile Moon person expectations.

Transiting Moon Sextile Pluto or transiting Pluto Sextile Moon often reveals some deep emotions from the past that the person has buried inside.

The experiences might be difficult to go through but it will clear the path for the person to experience new things.

This transit can often indicate the end of a toxic relationship that has been holding the person for a long time.This transit might finally make the person realize that they have been wasting their time and move on with their life.