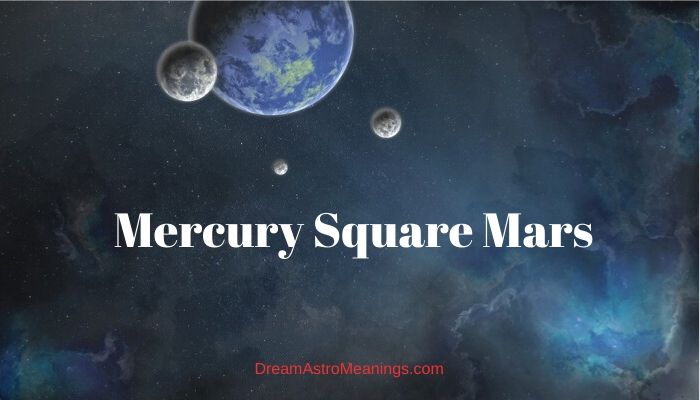 Planets influence our lives and that is something our ancestors concluded long time ago.

They analyze the meaning of the planets in signs and houses of the natal chart as well as the aspects these planets are making with other planets.

Aspects represent connections between planets forming a certain angle. There are many types of aspects but the most important are the major aspects, like conjunction, square, sextile, trine, and opposition.

They can have beneficial or malefic influence, which means they enable the easy flow of planetary energy or create blockages in the functioning of the planets. The exact aspects have the strongest impact.

The square aspect is a major aspect and its nature is generally malefic. It creates a strong energy between planets but prevents it to flow and creates obstacles or activates the worst traits of the planets involved in this aspect.

Squares form when the two planets are at distance of 90 degrees. Some squares don’t have destructive effects, but the overall influence depends on the nature of the planets that form the square.

Astrology can also be used to analyze relationship potential and the possible outcome of a relationship and its lasting power. Astrology uses a technique called synastry to determine whether two people are compatible or not.

It does that by comparing their planets and determining the aspects they are making as well as analyzing the placements of their planets in their partner’s natal charts.

These areas can be the ones where the partners might experience issues or easy flow depending on the aspects and character of the planets.

Synastry analysis can give a lot of insight about a relationship. If the aspects between two natal charts are generally challenging, the relationship will most likely be filled with tension and conflicts, and the partners will have difficulties maintaining such a relationship which will require a lot of tolerance and compromise on both sides.

The relationship won’t be a harmonious one and it is likely that won’t last. If the aspects are generally beneficial, the partnership is most likely a satisfying one. The partners are prone to making compromise and don’t have many issues because their characters are compatible.

Challenging aspects between natal charts indicate that these people don’t have many traits in common and they need to put in efforts to tolerate their differences.

Challenging aspects pose problems in all kinds of relationships because they cause tension and different issues people need to overcome to maintain the relationship.

These relationships are either those that cannot be avoided, like coworkers relationships, or they are based on great mutual attraction which prevents the partners to realize their differences and basic incompatibility.

Mercury is an intellectual planet. It is a tiny planet, and the smallest in the Solar system. This planet is the closest to the Sun and it moves very fast. It circles the Sun in 88 days.

Its name is derived from the Roman god of trade, communication, trickery, and travel. In astrology, the planet Mercury also rules these areas.

Mercury is the ruler of Gemini and Virgo. Those influenced by this planet tend to be communicative and love being around people.

They love collecting news and desire to be informed. They are quick witted and learn fast. These people are curious and enjoy learning new things.

They have a wide range of interests and they have fast reactions as well. Some of these people, especially the ones with challenging aspects can be prone to deceiving others and in some cases manipulating them.

These people are usually not very emotional, unless they have some influence of emotional planets. They usually have a rational approach to life.

These people love being around people and usually choose occupations where they are in contact with others. Communication and knowledge is essential to them. Many of them can be very practical and are good problem solvers.

The planet Mars is a small planet, similar to Mercury. In fact, it is the second smallest planet following Mercury. This planet is sometimes called the “red planet” because of the red oxide covering its surface.

According to scientists, Mars has a lot of similarities with the planet Earth which is why some people believe that life on Mars will be possible someday.

Some even believe that life descended from Mars which was inhabited in the distant past.

Mars rules Scorpio and Aries, and in these signs it has a lot of potential and energy. In Capricorn Mars is exalted and this is a good placement for Mars as well. Mars travels around two months through one sign unless it is in a retrograde motion.

Those influenced by Mars have strong personalities and if their Mars has challenging aspects they can be prone to aggression, impatience, provoking others, rude behavior, etc.

They might be very competitive and want to be first in everything. These people are usually dominant and don’t allow anyone influence them.

On the other hand, Mars people are prone to controlling others and often feel that they have full right to tell others what to do.

The square aspect between Mercury and Mars in synastry is not an encouraging sign for the duration of the relationship. This aspect is often an indication of a relationship with highly conflicting nature, where the partners will find it difficult to keep their calm and avoid conflicts.

Communication is one of the most important things for the Mercury person and in this case, it will be hard for Mercury to have the communication they desire with the Mars person who might be prone to overly critical and dominant behavior.

The Mars person often has a tendency to believe they are always right which is something Mercury cannot understand. They love to explore and are not afraid of changing their opinion if they discover some new information and facts about some matter.

Mars can be quite dogmatic and prone to sticking to old beliefs even when they are aware that circumstances have changed.

Mars can be impatient and easily annoyed. The Mars person might be irritated by the Mercury person’s display of intelligence and knowledge of things.

They don’t like when someone’s apparently smarter than they are and their ego might be hurt by that even if Mercury isn’t aware of the effect their behavior has on the Mars person.

The conversations between these two can be very energetic and interesting, but Mars person could easily get angry if Mercury starts contradicting them in some way, especially if Mercury has obviously better arguments than the Mars person.

It is never wise to provoke Mars and in this case Mercury can be under a real attack.

If they are brave enough to speak their mind about things and openly express their opinion they risk Mars disliking their opinion which can cause arguments between them.

This is not an easy relationship, especially because it requires the Mercury person to adapt to the Mars person (because Mars would never do that), and that is a lot to ask from Mercury in this case, because they need to give up on something they care about and value the most in a relationship, which is, quality communication.

In most cases, bad communication will be an obstacle that the partners won’t be able to overcome.

Both the Mars and Mercury person can be very sharp with their words. They don’t care if they offend someone and they are open with their talk and expressing opinions. The main problem is the need to control their tongue to be able to maintain this relationship.

It is not at all easy to achieve. They will constantly provoke each other with their words, either willingly or unwillingly.

For this relationship to work out, it will take a lot of patience and compromise on both sides.

They will both need to suppress their urges to contradict and learn to respect their partner’s opinion and agree with them from time to time; that is necessary for keeping a healthy relationship and ensure its stability.

It is not impossible, but it takes a strong will and action on both sides. If they manage to do that, they might benefit from each other because they will learn to control their reactions and become more respectful of others in general.

The Mercury square Mars aspect is not an easy one to deal with when its created between the natal charts of two people regardless of the nature of their relationship. The main issue with this aspect is communication which isn’t flowing, but tends to be full of conflicts and disagreements.

Both Mercury and Mars have strong opinions about things and have the need to convict others to accept their opinion.

Mars has the need to always be right and win in every situation and might get upset when he discovers that Mercury is not easy influenced. That will certainly irritate Mars and he will start arguing and attacking Mercury.

Mercury isn’t used to fighting and arguing because they tend to win their battles with calm and argumentative speech. They cannot understand Mars’s need for fighting and doing everything to convince them of their opinion.

Mercury allows others to have their opinion even though they might try to convince them to change it.

The difference between Mars and Mercury is that Mercury won’t try to force Mars to accept it, and Mars will try to do that.

The pressure and the conflicts will certainly weaken this relationship and this might lead to its end.

It is likely that the Mercury person will become fed up with the arguments and the drama, and they will decide to leave this toxic situation.

If the Mercury person has some other influences in their natal chart which makes them more tolerant and able to accept Mars’s influence this relationship has a chance of lasting.