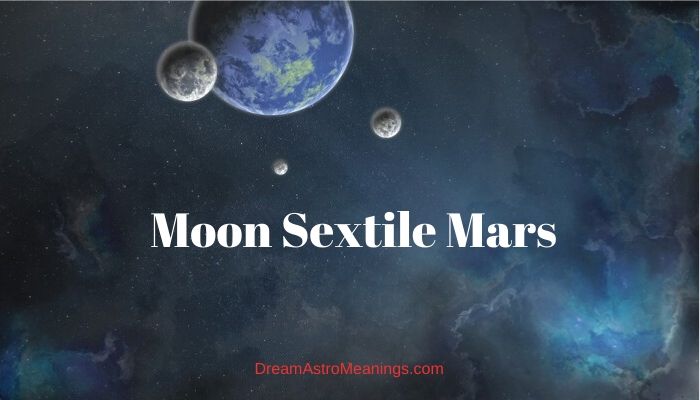 Moon and Mars are planets of very different energies, which makes this combination quite interesting.

However, the whole secret lies within the type of the aspects between planets. In this case, we have a positive aspect, for sextile is seen as one of the easiest and the least troubling types of planetary aspects.

Before we move onto understanding what does this particular aspect represents in one’s birth chart, let us analyze the planets alone.

It is of vital importance first to understand how the Moon and the planet Mars affect one’s personality in general; we would love to see what each of them represent in general.

When in a personalized natal chart, these planets would play a specifically designed role, to say.

The Moon is referred to as an astrological planet, within the astrological terminology; astronomically, it is not a planet.

The Moon in Astrology

The Moon has always been associated with the feminine principle, with female deities, with night, mystery and especially with emotions.

The Moon is associated with the element of Water and the planet is a natural ruler of the most emotional sign in the horoscope, Cancer. The Moon also strongly affects other Water element signs, Scorpio and Pisces.

As you probably know, all of these signs are considered deeply emotional, though different.

The Moon represents one’s soul, one’s emotionality and feelings as a whole. This Water element mysterious heavenly body is logically associated with flexibility and adaptability. Its quality is changeable, unstable, though its base is, in fact, unchangeable.

No matter what happens, the Moon would always emit its deeply spiritual and emotional, though flexible, flowing and changing energy. The Moon in a horoscope is usually associated with changeable mood.

You have possibly experienced the unusual restlessness in the time of the full Moon, if you are a sensitive and a sensible person.

It is because the Moon’s strange mysterious and otherwise passive energy is strong when the Moon shines in its mysterious starry eminence.

The Moon reflects the sun; it represents the hidden part of one’s personality. The Moon is not about conscious intention and obvious self-awareness, like the Sun.

It is about the deep insight, intuition, the voice from within. No wonder people have always been associating the Moon with the realm of fantasy, dreaming, imagination.

The Moon represents bonds, especially of the emotional sort. For example, one’s affection towards others, the connection with one’s native country, home and so on. The Moon in a natal chart of a man represents the feminine side, his mother, his lover or a partner.

It could represent other important female figures in a man’s life. In a female horoscope, the Moon represents the woman herself, but also her mother.

The Moon is closely associated with the domain of family life, home, safety, emotional connection. People with emphasized Moon’s position in a natal chart are sensible, intuitive, inclined towards mysteries and inner world.

In women, it represents reproductive organs. The Moon is associated with the following concepts, those of moisture, water spaces in general, long journeys, history, embassies, seaside, riverside.

Mars is an entirely different planet, from the astrological point of view. Associated with deities of war, masculine ones, this planet represents the fighting spirit, warriors, combat, trouble, danger, conflicts.

It is an extremely powerful principle that represents one’s desires, one’s active strength.

Compared to the Sun, for example, which represents reason and will, Mars represents the impulse, raw energy and force. It represents actual activity and strength one invests into something.

Mars is associated mainly with physical strength. It is associated with potency, endurance, competitiveness. In men, Mars represents their potential as lovers, their reproductive strength.

It represents men figures in female horoscopes, the father, the partner, the lover, the brother or other important ones. It always represents the masculine element.

In men horoscopes, it represents their strength, it represents youthfulness. It is associated with vitality, with prime strength. Mars always stands for force and raw energy people use in order to reach their goals.

Mars does not necessarily have to do with actual, physical fighting, of course. It would greatly depend on the aspects Mars creates with other planets within one’s natal chart. Mars is a tricky one, since it could bring great troubles, conflicts, injurious.

However, at the same time, it gives one strength and courage to overcome all of it.

Mars is intense, powerful, direct in its activity. Now we will see how it ‘fits’ the gentle, mysterious Moon in the sextile aspect.

The sextile is an easy and generally very positive aspect. It represents the angle of 60 degrees between planets in a natal chart.

The sextile is similar in energy to trine, though it requires more effort for achieving concrete goals.

The sextile is a good aspect that generally allows good flow of energy between the planets, the positive type of the flow. The sextile aspect stands for compatibility, balance, synchronization, harmonious connection.

This aspect brings in positive vibrations, since it contributes to overall synchronization and it balances natural energies of the planets involved. We could say the sextile aspect makes planets recognize the useful side in one another and they fill in one another.

It is especially interesting to observe between planets with opposite energies or, better to say, very different energies.

This aspect will always support one’s inborn skills and one’s talents. The sextile is also about creative manifestation and expression. The sextile generally stimulates the energy that flows from one planet to another.

Therefore, it contributes to the creative, expressive side in an individual.

Its positive nature would greatly contribute to expressing natural talents within the field of personal interests. This is especially important, since such energy could be blocks with unfavorable aspects.

The sextile aspect always stimulates activity, though does not force anything. We could safely say the sextile is a good and mild, ‘natural’ type of aspect.

It does not force the energy to flow; it adapts it, rather. It makes it useful, creative, productive in the most pleasant way. However, it is a heavier aspect in comparison to the trine, a related one.

The sextile seeds an active approach and recognition of its potential, but it breeds the positive attitude and the awareness of its quality in itself. With the sextile, one easily overcomes difficulties and limitations within certain area.

Having in mind the natures of both the Moon and the planet Mars, it is not difficult to conclude what would be the outcome of a favorable aspect between these two.

Yes, the sextile is a favorable aspect that always supports good energies in both planets and perfectly balances it.

Moreover, it makes them compatible, regardless of how different those might appear.

The sextile between the Moon and Mars makes for a passionate personality, one in love with the life as it is. This is a tremendously good combination.

What is very important to note and interesting to observe is that people with the Moon sextile Mars aspect are very emotional, very open in terms of their emotions, but their emotionality does not take over the control over life.

To put it the other way, it does, though in the most positive sense. These people breed emotions and live through emotions.

However, their passions do not make them lost in space and time. They are very direct and so their passions are directed and controlled in just the right amount.

One with the Moon sextile Mars would be a person passionate over something they love to do, but their extremely strong feelings would not blind their eyes.

They would not lose their track; they know how to channel their emotions in the most pleasant and the most productive way. In addition, this control is not a forceful activity; it is their state of being.

They are not impulsive; they do not go over their reason just for the sake of pure pleasure, especially if it means others could be hurt along the way.

These persons are emotionally intelligent and stable. They are intense, but positively. They are not forceful, but open and natural. In love life, they are perhaps the most natural partners and usually known as amazing lovers, on both a physical and an emotional plan.

People with this aspect would often express great love for nature, for outdoors activities, travel, sports.

They need activity and they are, indeed, in love with the world. Their love is dynamic. They need emotional relationship; all those things they need to share with a loved one.

These individuals are warm, optimistic; they would do anything to please their dear ones, but others would never manipulate them.

Moon sextile Mars people are usually not only admired, but also liked and loved by the great majority of people they get in touch with.

There is something that should need to be understood about Moon sextile Mars people. Their energy is tremendous and their emotional energy could be explosive. Since this is a positive aspect, this explosiveness is associated with positive emotions, namely, with love.

Mars sextile Moon are people who are capable of finding the perfect way to express their incredible love potential. They could appear too intense, too imposing, too aggressive in their affection, to gentle, shy personalities, although they never have any bad intentions.

Mars sextile Moon individuals are usually incredibly magnetic and alluring. They are not shy and they could even be provocative; they are seductive, by all means. Their feelings are strong, easily heated up, but their passions are lasting.

Their love is not an impulsive feeling, though the first expression of affection towards someone could appear impulsive.

Mars sextile Moon people know what they want, especially in terms of love. If they are into someone, it is not a game; it is their most sincere emotion.