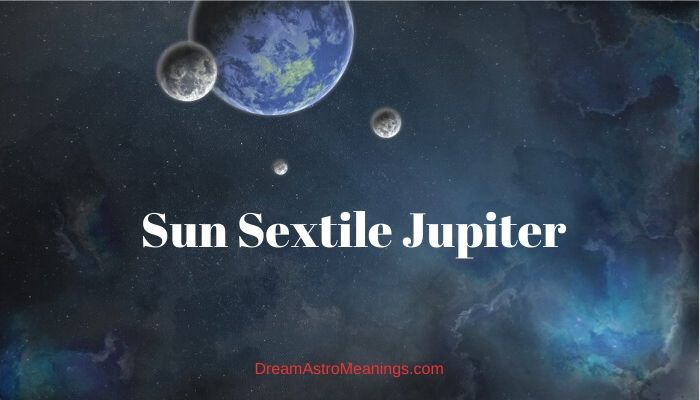 How two powerful planets such as the sun and the planet Jupiter affect one another, when in a sextile aspect? The sextile is just one of the aspects planets could create amongst themselves in a natal chart.

Aspects are essential in understanding the whole chart. They tell about specific energies planets emit in relation to one another.

Aspects tell us about whether the energy was blocked or it flows freely. Aspect could be troublesome and conflicting, but also easy and favorable.

Of course, one would like to have more of favorable than negative aspects in his or hers birth chart. It will depend on your exact birth data and specific positions of the planets thereby presented.

When speaking about birth charts, we have to say they are unique almost as a fingerprint.

Although two people could be born at the same place, the same year and day, even in the same hour, their lives will be different, just as two snowflakes are different in their magnificent design.

People are wrong to think charts work as predictions or give us set in stone information about one’s character and overall personality. Natal charts reveal potentials we have in life, from our inner constitution to circumstances we live in. However, everything else is within your hands.

Understanding the natal chart helps one understand himself or herself better. In other words, knowing your astrological destiny helps you recognize potentials you have.

Aspects play a major role in a natal chart. They tell about specific relations different parts of your personality and overall being present with.

Knowing your aspects could help you understand why some things are so easy, while others so difficult.

For example, someone would have a problem with communication, if Mercury were in a bad aspect. Another person would be very skillful with using words, with a good positioned Mercury with good aspects.

The Sun is the light of your inner self. This planet (in astrology, both the sun and the Moon are categorized as planets) represents your true self, your identity, your self-esteem, aims, and the strength of your will.

The Sun is glorious and associated with fame, success, achievement; in a horoscope it represents your most obvious and the strongest personal capacities and potentials.

The brightest of the stars represents ambitiousness, self-integrity, bravery, nobility, self-consciousness and self-awareness. We could say the Sun represents the Reason, while the Moon represents the emotion.

The Sun is a masculine principle and it is associated with the heart and with blood flow.

The Sun supports one’s inner strength, gives us courage to overcome challenges and makes us daring and willing to take up challenges.

In male horoscopes, it represents the man himself, especially in the role of a married man. In female’s horoscopes, it stands for strong male figures, a father or her partner.

It is the planet of kings, emperors, judges and generally all figures of some kind of authority. For the Sun, to rule is a natural thing. The planet rules the sign of Leo. The Sun is associated with gold and richness. It is not only about material richness, but also the richness of one’s personality.

The Sun represents warmth, loyalty, protectiveness, generosity. Look at the Leo people; they love to boast around, but they are passionate, loving and caring individuals. The Sun represents the truth and does not like secrets and hidden meanings.

This is a very straightforward and a bright astrological planet.

Jupiter is another powerful planet, mighty and associated with the concept of authority and great influence.

As you probably know, Jupiter was the Roman supreme deity, counterpart of the Greek god Zeus. His brothers are Neptune (Poseidon) and Pluto (Hades). His wife is Juno (Hera).

Jupiter had many lovers amongst goddesses and mortal women. Some of his children were Heracles, Perseus, Apollo, Diana (Artemis), Mercury (Hermes). This deity has always been associated with powerful celestial phenomena. Jupiter was the god of thunder, lightning, rain.

Many celebrations were dedicated to this powerful god, in order to honor him, but also to please him. It is also interesting to note that Jupiter was also known as the ‘rain-maker’ or the ‘rain-bringer’.

He was the ruler of all other gods, ascending to the throne after slaying his titan father Saturn (Cronus).

The planet Jupiter represents our connection with others; it is one of the social planets and it affects the whole generations.

Jupiter, as an astrological planet, enlarges the body part associated with it. The aspects Jupiter creates with other planets would have much to tell about how we approach to life, how we interact and position ourselves in the society.

If in favorable position, its tremendously positive and optimistic energy would definitely make a mark on our lives. Sometimes, Jupiter is seen as our protective planet.

The sextile is a stimulant aspect. It affects one’s creative abilities and organizational skills, opening up the energetic channels. It is a positive aspect that balances the energies of the planets involved.

With a sextile aspect, planets’ energies go hand in hand, no matter how different when seen separately.

The sextile aspect is about harmony, compatibility and free expression. Compared to the trine, it is a bit heavier, though still pleasing and easy.

This aspect is generally about tolerance and balance; it encourages dynamics, but it also does not lead to extremes. It makes one get over any limitations, self-invented or imposed.

The sextile promotes creativity, imagination and skills. It symbolizes talents that a person possesses within the field of his or hers activity and interests. We could observe the sextile as an aspect that manifests in physical and emotional harmony and balance.

It is an aspect that helps in overcoming negative thinking, recognizing good opportunities, embracing an optimistic attitude towards the world and life.

The sextile always contributes to manifestation of all the positive traits found in an individual.

Sun sextile Jupiter people seem to be born under a lucky star! Their natural kindness and optimism makes them appear satisfied, content and happy in the eyes of others. To tell you the true, they are.

However, their incredible aura makes them magnets for good vibrations and positivity, as they emit positivity around.

They are the least likely individuals to see being depressed and totally out of their track.

These people are commonly very well received, admired and loved by others. It is so interesting about them that they shine with self-confidence and self-integrity, but they are not imposing or aggressive.

On the contrary, they are not competitive and they do not engage in conflicts.

They usually know what they want and they would take up an easy approach towards achieving their goals. Their relaxed and generally friendly positive attitude makes you think their success is mere luck.

Sun sextile Jupiter people are warm, helpful, supportive and protective individuals. They have strong and well-set morals, but are warm hearted and compassionate, they are not of the judging type.

Sun sextile Jupiter people are capable of seeing goodness in the humanity and there is literally not a chance to discourage them in their optimism.

We could say they have a bit of an idealistic view, but they are in fact very realistic. They simply focus on the bright side, while not ignoring the negative; they would try to fix it.

They would always have a word of comfort and encouragement, for they truly believe in good. People with Sun sextile Jupiter are big-plan people and they have a very broad mind.

They love to learn, they love to explore new countries and meet different people. They enjoy visiting foreign lands. Sun sextile Jupiter people seem not to have too many troubles and worries in life.

It is not that their lives are generally much different from other people’s lives, but their attitude and their convictions are different. They believe there is goodness in everyone and they are convinced they could always find it.

These are not fantasies; Sun sextile Jupiter people would gladly help others see the bright side of life.

One of the best traits of these incredible individuals is their sense of humor. It is always in the place; they do not ridicule anyone nor make awkward jokes. Their humor is refreshing.

People love to be in their company. If you feel down, be sure a Sun sextile Jupiter could cheer you up, gently and with kindness.

Although these two planets are both associated with authority and leadership, people with Sun sextile Jupiter are not interested in such roles.

They are capable of finding joy in simple things in life and they appreciate it. They tend not to take everything seriously, but they are definitely not reckless, insensitive or irresponsible.

They would gladly help others. Their authoritarian trait could be seen only in their willingness to protect others. They enjoy the role of a guardian and the one to comfort.

People with Sun sextile Jupiter are lucky, because of their willingness to share with others. Their positivity is so strong that the Universe returns it back to them.

Even in the most terrible circumstances, it is highly unlikely you will find a Sun sextile Jupiter despairs. Even if they lose everything, they are capable of finding their light and overcome all the difficulties.

Individuals with this aspect have a natural sense for justice and law. They understand laws in their essence; both those of nature and those we, humans, create.

People with this aspect could help others better understand such laws and are willing to do so. Moreover, because they have an inborn good sense of what is beneficial to the humanity in general, they would have some good suggestions on how to change certain laws. Let us see how this aspect reflects on a child’s horoscope.

If your child has this aspect, it means he or she has great chances to succeed in life. You should not force them; such kids usually find their field of interest easily.

These kids have a good sense of honesty and justice, staring from an early age. They are usually loved by others and have many friends. There could always be those jealous ones, but be sure a little Sun sextile Jupiter could not care less.

These kids develop a very healthy empathy and tolerance at a very young age. Later in life, they are likely to be involved with some charity, counseling volunteer work. Do not discourage them.

They develop good relations with older people, just as their friends. If there are dynamic squares within the kid’s chart, this favorable Sun sextile Jupiter aspects will be even stronger.