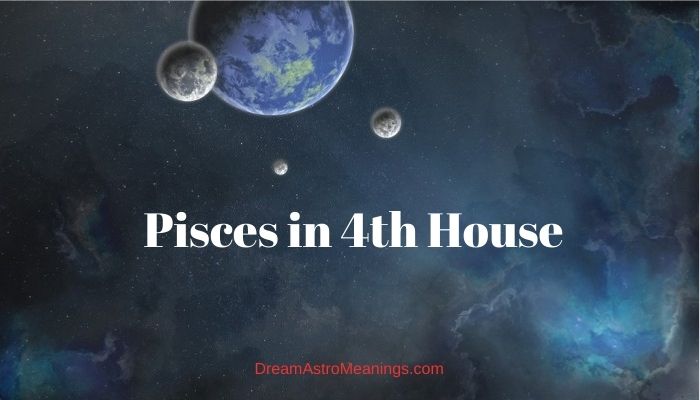 The fourth house in astrologers is angular and governs everything related to the fundamentals of a person.

Home, family, roots and ancestors are ruled by this home.

This astrological home means that you think of home as where you are from, where you were born.

Home for such a person is a place of loneliness, completely hidden from the eyes of strangers.

Such people love solitude, isolation and prefer to communicate with others outside the walls of their own home.

The walls of the house allow them to isolate themselves from social life and everyday worries.

Such people often experience significant difficulties in connection with setting up their own home, and therefore they often rent living space or live in departmental buildings.

The domestic relations of such a person are full of ambiguities and omissions, and they tend to blame their family for everything negative, demagogically projecting guilt onto them.

Their favorite position is caught at first glance – “I wished everyone well, and the fact that everything turned out so badly, others are to blame.”

Religious feeling comes as a revelation of Divine Love, while a person passionately loves the whole universe and its large population.

In domestic life, such people are often overly sentimental and compassionate. Over the years, they gradually highlight the emotional and mental filth of the psychological atmosphere of home life, but this highlighting is often associated with very unpleasant experiences, tragedies of deprivation, pangs of conscience, disappointment and separation.

With harmonious development, such a person loves to receive people at home, whom he can help and assist.

True, at the same time he projects guilt on them for all his failures and every now and then tries to complain about his hard life. He is not used to putting severe restrictions on his family, he is very peaceful and non-aggressive.

But it is not easy for others to rely on him, an unsuccessful marriage often leads to alcoholism, which can be dealt with purely magically, for example, by setting specific external goals and objectives for oneself, keeping the house clean and tidy.

Strongly emotionally attached to his family, and therefore inclined to provide services to family members, especially in old age.

Often it seems to him that a lot of responsibilities that require fulfillment have piled on him, which is why his life is very difficult.

The existence of a strange compromising family secret is possible. Sometimes they are overwhelmed by sadness and sadness that he cannot share with others, which is why he finds himself in spiritual loneliness. His own home plays a huge role and is a refuge from the world in which he can replenish the energy lost in external actions.

A house is not just a building; it is the environment within it and your perception of this environment.

While this area of ​​your natal chart is centered on the real place where you grew up and live, the most important thing is your emotional connection with the things that you associate with your home.

In addition, the fourth house governs magical powers, transmitting their blessings or curses from previous generations. The

se forces can extend to very deep levels and follow the family for many generations in the past and in the future.

Thus, one can observe the relationship of the owner of the natal chart with his mother through the planets located in the house and the aspects that they form. Feeling safe and cared for is a fourth house experience.

He can tell you what assets you will inherit, including money, a country house, or grandfather’s field.

These are assets that do not belong to other homes and that store your family’s wealth. They come into the native’s life from birth, like everything that brings the 4th house.

The fourth house in Vedic astrology also refers to emotional satisfaction and peace of mind. Social norms, material security, family history, background, culture, lifestyle, and traditions fall within the scope of this home.

It determines the home environment and the state of your family later in life and how you deal with family problems. He talks about whether a person will have strong roots and real estate, and whether he will strive for comfort and have his own family.

Since the characteristics described in the fourth house were acquired in early childhood, they have a great influence on the decisions that a person makes as an adult.

An in-depth study of the fourth house can lead to an understanding of how to eliminate destructive habits that exist in your home, family and personal life.

It is very difficult to draw a conclusion about the indicator of the house, where Neptune stands or what it controls. This is by nature, incomprehensible, ambiguous.

Moreover, if in all other cases we say – in case of defeats – this will be, in a harmonious version – this is that.

And Neptune is also interesting because there may be no defeats, but in reality the picture may be very unattractive. Or vice versa – it seems that there is a defeat – but Neptune does not give any trouble.

Unfortunately, Neptune does not have that specificity, which, to a greater or lesser extent, is given by other Planets.

Of course, defeat makes unpleasant situations more likely, but nevertheless, it is far from the fact that it will be so. Harmonious indicators give a greater chance that the situation will develop according to a more favorable scenario.

But even in this case, unfortunately, we are still not immune from another scenario.

Therefore, in a good case, in the case when the Neptunian qualities developed well – the mother is gentle, the mother is creative, possibly vulnerable, sacrificial, and very affectionate. A mother who knows how to create an atmosphere of some kind of unreal bliss, unearthly happiness in the house.

If we developed a bad scenario, or even it happens that both scenarios developed in parallel, the mother may have serious addictions, mental difficulties.

Mom can be mentally unhealthy. In a bad case, it may be the mother of the “victim” – a very serious and very strong manipulator, whom we perceived throughout our lives as a very weak person who found himself in a difficult life situation. As a very defenseless, subtle person, the kind that everyone always uses.

And then, having already matured, it may turn out to be obvious to us that mom is not so defenseless, but very insidious. One who built her whole life on her helplessness and helplessness? Which everyone served throughout her life and she did not hesitate to speculate on this image.

In a bad version, it is the “shaman” house, where everyone drinks or takes drugs. Mom can take some unworthy men here. In the house there may be booze, brothels.

Mom can be a completely optional person, completely divorced from life, such that, using her image of a victim, she creates anything.

Neptune as an exercise. 4 houses, being a natural significate of secrets, often gives the secret of birth, or some kind of secret in the family.

It so happens that the Native does not know who his father is. Or all his life to be considered a dad alone, and then it turns out that by blood this person is completely alien to him.

Maybe something happened in the family, some secrets that may be revealed to the Native when he grows up, but maybe not.

The topics are very different – I met the descendants of repressed ancestors, it was not customary to boast of such kinship in Native’s childhood, this did not fit into the global concept of “correct” origin.

Such map indicators often indicate dilapidated housing. For housing that is regularly exposed to floods.

Or if there is any serious damage from 12 or 8 houses, such housing can be damaged as a result of a major flood, up to its complete loss.

It can be said that the native inherited some powerful occult quality, tremendous intuition. Indeed, Pisces on IP very often gives people with a very strong intuition.

They can see prophetic dreams, very vivid and specific. They can communicate with the spirits of their deceased ancestors. Have some kind of vision.

Moreover, for them this is a fairly natural state.

Neptune, the ruler of Pisces, is perhaps the most interesting character of all the Planets.

Because Neptune is the most controversial. You never know for sure whether it will be alcohol or creativity, mercy or the position of the victim, affection or complete irresponsibility.