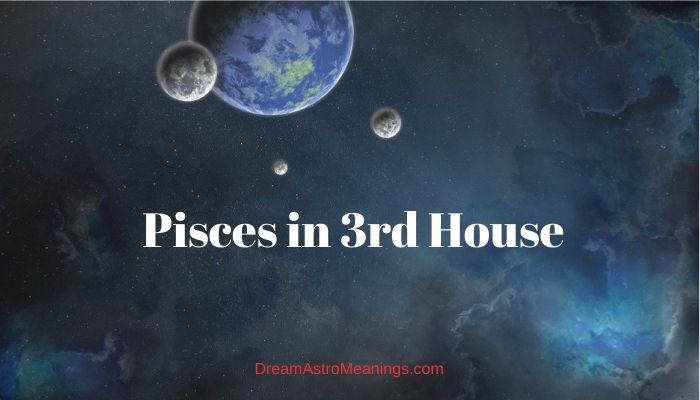 Communication with close people: blood relatives, neighbors, and colleagues, at all levels: friendship, telephone conversations, correspondence and joint study is under the influence of 3 houses.

First of all, this is primary education, any bureaucratic authorities, handling documents at home and at work, and most interestingly, driving a car.

The nature of short trips and business trips can also be deciphered by the sign where the cusp of this sector passes.

If the 3rd house is in Pisces, its ruler is the most mysterious and unpredictable planet – Neptune.

Tense aspects draw the native into intrigue and confrontation with secret enemies.

In a good scenario, events develop in such a way that he studies in a gymnasium with a creative bias or shines on stage, wins painting competitions, and with a strong moon he also sings.

A school star or a victim of conspiracies are two extremes that are difficult to avoid. Communication at school and with relatives Third-house Pisces comes to school, ready to love teachers and classmates with all their soul.

They believe in friendship for centuries and idealize teachers. Knowing this, parents are simply obliged to find an institution where they will best support the child’s creative talents, and the teacher will be attentive and responsive.

Otherwise, the fine organization of the 3rd house in Pisces will simply collapse, unable to withstand meanness and bias, which will lead to a nervous breakdown. The teacher should help a shy and withdrawn native to adapt in a team.

This will be the key to future self-confidence while studying at the institute and in the first place of work.

Otherwise, which often happens with an abundance of negative aspects, third-house Pisces will doubt their abilities all their lives and fight a hostile environment.

Moreover, in reality, others may not care about them, but indifference is perceived as hatred. The native has enough enemies both in the presence of talent and in the desire not to protrude out of the comfort zone.

An unexpected discovery will be the discovery of ill-wishers among relatives. Astrologers highlight the main features of the influence of the 3rd house in Pisces on fate: an emotional approach to learning and relationships: if there are no common interests and intuitive interest in the teacher, relatives, classmates.

The native does not even try to establish communication, closes in the inner world; inability to feel good physically and study effectively in a stressful environment, among rude and noisy classmates; the desire to search for a deep secret meaning behind dry facts.

imagery of thinking, meekness, vivid imagination; early falling in love and acute romantic experiences associated with communication with the opposite sex (including platonic admiration for the teacher) during school years; frequent diseases of a viral nature, poisoning and neurosis, if the relationship at school does not work out.

Problems with the formulation of the flow of their thoughts into words, public speaking not on stage, but from the oratory, when it is necessary not only to play a role, but to express a personal position or make a report on theses.

Relatives in a good scenario are creative, sensitive people, probably professionally involved in theater, cinema, psychology, who help the native to go out on his path and become a school celebrity.

The position of the 3rd house in Pisces is not the best indicator for driving a car. Absent-mindedness in class is one thing, and driving is quite another.

In addition, the native is in danger of suffering from tired, drunk, mentally inadequate drivers.

Sometimes he, too, can abuse alcohol and thinks that its okay, he will get there without any problems. Unlike the self-confident Uranus based on practical experience, Neptune fogs the brain with the illusions of its superpower, they say, it is others who cannot drive a car after drinking a glass, and I control everything.

If the level of spirituality allows you to work out a screaming ego, then danger sneaks up on the side of other drivers who may be drunk or sleepy. Exit in attentiveness to all the nuances on the road.

With harmonious Neptune and strong Mercury, the native’s reaction is fast, and the protection of higher powers will lead out of a dangerous situation. With an inharmonious third house in Pisces, relations with documents are complicated. They forget to collect all the papers on time, they simply put the finished package with important seals on the wet kitchen table, and they forget it in the transport.

The second house gives, especially with the harmonious aspects of the third house, a warm and emotionally understanding attitude towards people.

At the same time, at a low level of study at home, and especially when it is defeated, there is a complete absence of a moral core and exactingness towards oneself and others.

Another person is accepted only because fate sent him, and the main thing is that he does not harm me personally, and what he does with third parties is his business.

Working through leads to a very subtle, precise and sensitive social ethics, very differentiated and based on the empathic perception of other people; but false pity, guilt and duty, especially socially induced ones, must be realized and brought into line with the personal karmic program.

This person learns best through the immersion method, but must also have good emotional contact with the teacher.

One way or another, he always learns by immersion, but if the environment is unfavorable, let alone hostile, learning is profane; often a person eats up the energy component of the information and energy flow coming from the teacher and lets the meaning go deaf.

At the same time, it can be difficult to establish such a fact, since the facial expression will be correct: diligent attention, with an almost imperceptible aura of emotional pleasure, slightly exceeding the norm.

But in general, without pleasure, he not only will not learn anything, but he will not understand anything either. However, in the best case, the understanding will be of its own, essential and often very different from that which the textbook has in mind.

The teacher with Pisces at the top of the III house will be gentle and affectionate with his students; at least they will feel it, despite even his ascendant in Sagittarius, Capricorn or Aquarius and the affected Sun.

He will try to get the last student to pull up, or at least not receive an educational inferiority complex, which distorts him all his life. This position gives great emotional satisfaction from the learning process and contacts with students, you just need to try to lead them at the highest possible vibrations, not profane.

Good for music teachers; when in the lesson the head floats with happiness and attention is scattered.

The ninth house in Virgo should be balanced in an accurate and detailed way of the ideal, which, however, will be prompted by the disciples.

Likes to be alone with himself when doing mental work. He is ambivalent in his expressions, speaks in hints and the interlocutor himself must guess, and in this way he himself is provided with an alibi that he did not say anything like that. In a difficult situation, he trusts only his own instinct.

Another person is accepted by him only because fate sent him, and the main thing is that he does not harm him personally, and what he does with third parties does not concern him. Revered by all, indulgent to the needs of the poor. Afraid of moving and change.

Capricious, has whimsical desires. Little sociable, keeps aloof, somewhat timid and insecure. Knows human weaknesses and knows how to forgive them. He values ​​virtues highly, but does not perceive deviations from them tragically. If it is possible with gentleness to turn enmity into friendship, he will willingly do so.

Realization of all its ideas and ideas will take place with the participation of an internal instinct. Their personal affairs, connections, such people advertise extremely rarely.

Home in Pisces – the characteristics of a person all actions, moods, ideas of such an individual are found under the influence of the emotiveness of their carrier. All of these theories are supported by intuitive knowledge and feelings.

And they never consider it correct to respond to someone else’s perception, and they will not be justified in their behavior and attitude to third parties.

In discussing the issues of social ethics, such people will not listen to logic and reasonable arguments, but will completely rely on their own feelings and emotions.

They will accept for truth what their love suits them. If a person with a HOME in Pisces, develops harmoniously, then she will at all have an increased sensitivity, tone of perception.

With such data they form their own model of sensitive, toned social ethics, in which they take into account the basis of the empathic perception of the neighbor.

If the training created for training will strain the individual, then the deep meaning of the question will not be understood by the student, and the entire learning process will not be effective and ineffective.

Such a student is able to maintain an interesting view for a long time, hiding behind it his own indifference and lack of attention from studies.

Not getting pleasure from the study process, he is not able to achieve positive shifts in the issue under study.

Often, in such a situation, he forms his own material, not appearing to the opinion of the author, prior to his presentation.

From the people who are under the influence of the Third House in Pisces, there are good teachers of music, literature, as well as mentors-psychologists.

By developing in themselves the ability to concentrate attention, it will be easier for them to avoid problems in the mainstream.

To drive such personalities into a lifetime is possible for them to fail in the failure of their relatives and friends, and they think of their thoughts as their own. Quite often they show the ability to poetry, and also in them one can notice a certain distance from the outside world.