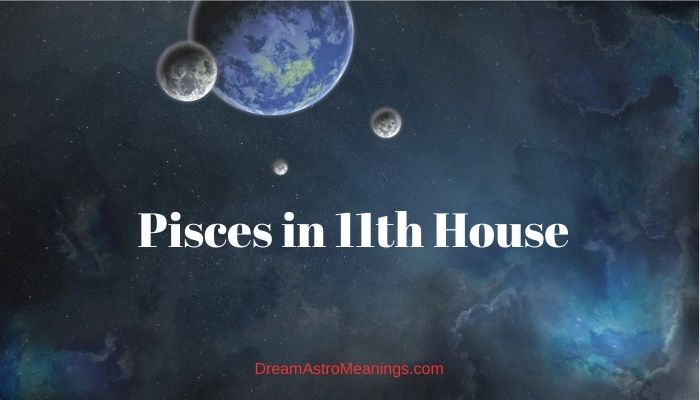 The eleventh house is about how we interact with organized structures of people and how we integrate into such structures.

It is commonly referred to as the “house of friends” associated with friends, common goals and ambitions.

It includes the clubs in which we have a membership, from sports clubs, football fan associations, political parties, artistic unions, to religious or even secret occult sects. It is located opposite the fifth house, which speaks about your way of creative expression, and its opposite, the eleventh house, about the creative expression of groups.

In relationships with friends, such a person harmoniously combines wisdom and subtle emotionality.

In choosing friends, he is guided by both emotional impressions and inner intuition, which saves him from the danger associated with the establishment of disharmonious relationships.

Mistakes made in relation to friends, and the wrong choice of friends themselves, are extremely painful for such a person.

The latter, nevertheless, does not prevent him from throwing himself rather frivolously into the arms of his acquaintances who appear on the horizon, so that afterwards he will abandon many of them.

With low development, such a person is inclined to parasitize on the team, plunging into the muddy water of indistinct responsibilities, unclear relationships, empty grievances and unsatisfied ambition. He maintains friendship with everyone, trying not to answer for anything in particular.

But he cleverly grinds himself to profitable places and tidbits. He perfectly feels the inner mood of the team and, with high development, can, with his sincere participation, gentle attention and comforting understanding, soften the climate of the group and smooth out serious contradictions.

Often such a person looks at the problems of the group through rose-colored glasses, but in his presence conflicts and mutual tensions dissolve by themselves.

Sometimes such a person turns out to be too touchy and shows a tendency to deceit and deliberate deception.

For the sake of finding a comfortable position, he is inclined not only to rush from one place to another, but also to give promises that he will soon improve, as he realized his guilt in front of others.

Such actions are determined not so much by deceit as by a tendency to completely sincere self-deception and limited tactical momentary adaptation.

But such a person will always find sympathy and understanding for an unjustly offended, persecuted or unhappy member of the group.

Relationships with friends are warm, emotional, with a tendency to be completely immersed in feelings and emotions, not always constructive and sublime.

You need to sort things out less and behave more practically with those whom you call friends.

Some of the friends of such a person belong to the world of parapsychology and esotericism, and some to literary and theatrical circles.

You should be wary of betrayal by friends and acquaintances. The opinions of others are of great importance to him. If he is not appreciated enough, it deeply hurts him and brings dissatisfaction.

He is very generous towards people with whom he has something in common. But he needs to overcome the tendency to be excessively stingy in relation to others. He often likes to gossip with his friends.

This is because any planet in transit (especially a slow moving planet) will enter the 11th house after passing the 10th house.

Many of our 11th house events are related to a previous career house. For the changes in both houses, the same transit planet should be thanked (or blamed).

Here we can see the big money that can come from winning the lottery, and the income generally associated with our careers.

The second house also has to do with money, it basically indicates how we save money and how we spend it, not where it comes from.

The planets in the eleventh House can provide an idea of ​​which groups you can join. For example, Mars indicates sports clubs.

The planets present in the eleventh house can force us to have community leaders as friends, which in turn can very often help us in other areas of our lives.

The sun in the 11th house of the natal chart speaks of a strong sense of friendship in a person. He likes to feel like a part of something larger, a kind of superorganism, and not to perceive himself as an individual.

Such people willingly join various official organizations and are proud of their social activity. They always have many friends, especially male ones.

Friendship is so important to them that sometimes it can negatively affect the relationship with a loved one. This is that classic moment when friends are more important than family.

But it is worth noting that in a difficult situation such people have someone to turn to for help, both financial and any other.

Moon The moon in the 11th house of the horoscope means a close connection between a person’s self-esteem and his relationship with friends.

The moon is a feminine planet and most likely a person will have more female friends.

Such people often have a close emotional bond with friends or organizations in which he is a member.

The affected Moon can lead to various emotional outbursts and tantrums in relation to friends.

The moon is constantly bringing new acquaintances. The old ones tend to fade away just like the moon wanes before completing its monthly cycle.

Mercury Being in the 11th house, Mercury strengthens everything related to group interactions, such people are drawn to large and large communities.

Such people often become altruists who prefer to sacrifice their personal interests for the sake of public ones.

Such people always have many friends and acquaintances, they need to understand which people can benefit them and which ones are better to avoid.

It is also worthwhile to beware of the habit of gossiping, which is very likely with such an arrangement of Mercury.

Since you know so much about others, it is natural that you want to share this information.

Thanks to this, they are allowed to access only those with which they can establish a harmonious relationship. 11 a house in Fishes is a person’s character.

When such a person allows you to be incompetent and offends your loved ones, he develops a strong stress.

He can also anchor himself by name because of what one of those, whom he considered to be another, discouraged him.

If a person who was born, when 11 is at house in Fish, does not care much about his spiritual development, he can become a real parasite. He will use the members of his group to achieve their own goals, constantly contributing to their mood.

He will begin to search for new knowledge, but before any of the newly acquired copiers there will be no responsibility. One such person will learn to easily find beneficial opportunities. In this case, he is unavoidably used by them, even if in the result someone will suffer damage.

A similar ratio can also be applied to family contacts. For example, the bosses will convert everything only to achieve the goal, or to be able to do nothing by themselves. Complicated relations with the airspace are also worked out in a romantic way.

Then he will deliberately find a strong, but sympathetic person who prefers to manipulate. This is a direct path to the degradation of personality, because it does not correctly perceive the essence of life and does not grow morally.

If he can find the strength for development, then in the end he will learn how to provide useful cooperation in many deeds, and also will always be able to soften the situation.

In such a case, he will be able to develop diplomatic skills that will open up a beautiful path, both in the business world, as well as in personal life.

However, regardless of the level of their development, such people will remain optimists. They will always look, as if through the posed glasses.

Their glass will always be half full, and luck will shine in all deeds and projects. In severely neglected cases, this can lead to voltage and conflicts inside the collector.

What concerns the relationship with friends, then everything is more or less smooth.

Such a person will always be able to find time to help the recipient in a difficult situation.

The only one, it is recommended to spend less time on the improvement of the ratio, and instead of this to learn how to use the composites.

People who were born when they are 11 at house in Fishes appreciate in themselves and respect in other people wisdom and sympathy.

When choosing their environment, they pay more attention to what their intuition tells them, as well as to what kind of emotional response a person evokes.