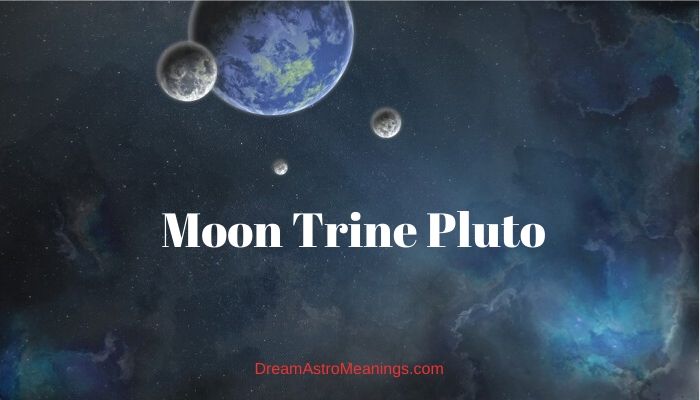 People have always wanted to discover the meaning of the stars and planets and their influence on human life.

Through ages of research and gathering information, a discipline called astrology was created, which deals with analyzing planetary placements in some moment of time and their influence on a certain event or personality.

In its most basic techniques, it analyzes planet’s placements in signs and houses, and their aspects.

Planets’ aspects are very important for determining traits and events, and should be carefully studied, especially if they are exact.

Major aspects or main aspects are the conjunction, opposition, trine, square, and sextile.

There are also minor aspects which have secondary significance in astrological analysis but shouldn’t be neglected if they are exact. Aspects can have harmonious or inharmonious nature and their effects will be according to that.

Trines are aspects that form when the planets are at a distance of 120 degrees. They are major aspects with harmonious nature. The trine acts in a way that enables the energy of the planets to express freely.

They create opportunities for achievement of goals and desires. Their nature is calming, and they clear the path to progress.

Besides analyzing events and individuals, and their future, astrology can be used for analyzing relationships between people and determining the quality and longevity of their relationships. Astrology discipline called synastry occupies with this analysis.

In the same way it analyzes someone’s personal traits, and their potential, astrology can analyze the relationship between two people by comparing their natal charts and analyzing the relationships between the planets in these charts.

Synastry has some other methods it often uses, but these are the basic ones.

In general, when the aspects between two natal charts are challenging, the relationship between these people could be full of tension and experiencing different issues.

These two need to put in the effort and compromise if they want to sustain their relationship.

This relationship is usually a lasting one that will make both partners satisfied.

Synastry is very useful because it can point to the issues the partners could possibly experience and, if that is possible, give them advice on how to prevent them or overcome them.

The Moon is not a planet; it is a satellite. It is the planet Earth’s natural satellite. The origin of Moon is still uncertain, but it is believed that it formed 4.5 billion years ago from the debris caused by the collision of Earth with some astronomical body.

Some theories suggest that the Moon is an artificial formation and that it was created by aliens.

The Moon is the brightest object on the night sky. It travels around the Earth in such a motion that prevents us from seeing the far side. From our planet, only one side of the Moon is visible, which gives some more meat to the story about the Moon being an alien creation.

In astrology, the Moon is the ruler of the sign of Cancer. It is exalted in Taurus. When the Moon is placed in these signs, it has the most power.

The Moon is the ruler of our subconscious content, our beliefs and habits. It shows how we handle our daily duties and confront the issues that arise.

The Moon also shows our feminine side and how much we embrace it. The Moon is also the ruler of women in our life, predominately our mother. It is the ruler of our motherly instincts.

The house where the Moon is placed in someone’s natal chart indicates how nurturing and caring they are. It also reveals the level of care the person has for themselves.

The Moon also shows the level of comfort we desire or have in our lives. It signifies our home and shows how important our home is to us.

The Moon can also give us intuitive powers and reveals whether we are connected to our inner being and guidance. The Moon is the ruler of our mood and the reactions coming from our subconscious.

Those who are under a strong influence of Moon can be prone to unexplained mood swings. They tend to change their mood without any announcement and they can be very unpredictable in their reactions.

It is important to note that the Moon rules our emotional life and our memories.

With challenging aspects of the Moon people might be prone to holding on to the past and letting their past hurts ruin their presence and their future. These people let their past block the progress in their life.

People under a strong influence of the Moon are usually very emotional and sensitive to other people’s reactions. They can also be very shy. They are very protective and willing to do anything for those they love and care about. These people are home types.

The place where the Moon is in their natal chart indicates the area where they feel most comfortable.

Pluto is the god ruler of the underworld for the ancient Romans. In astrology, its symbolism is related to death and dying, as well as rebirth and transformation.

Pluto has a destructive and aggressive energy. In some cases, when Pluto forms challenging aspects with other planets, it brings destructive events into the person’s life that can be the cause despair.

People influenced by Pluto sense its influence through transits and progressions strongly. They usually have strong intuition and are able to sense what others feel and think. They also easily discover secrets.

The house where Pluto is in the natal chart, indicates where the person might experience events of Pluto’s transformative nature. Pluto initiates transformations that cannot be avoided and have a purpose in our lives.

Because it is a generational planet, Pluto also inspires transformational movements in society and often causes changes in the areas it rules.

People influenced by Pluto might experience issues with dominance, manipulation, and control. They can either have a tendency to control and dominate others or they allow others treat them in such a way.

Pluto’s lessons teach the person to stop behaving in such a manner or to stop allowing others treat them in this way.

When someone’s Moon creates a trine aspect with someone’s Pluto that indicates an intense emotional bond between these two people which usually has transformative effects on both.

They both feel that the relationship has a regenerative effect on them and they enjoy spending time together.

The sensitive Moon feels secure and protected next to their Pluto partner. This bond is both emotional and passionate. Their intimate encounters only bring them closer together. These two are very attached to each other.

They are both able to intuitively sense the other person’s feelings and take actions to soothe their partner if they feel that they are upset.

The Moon person is especially sensitive and needs to be treated with patience and care, and Pluto knows exactly what to do to make their partner feel better. There is genuine love between them.

This can both be a spiritually transforming experience for the both. In some cases, this relationship feels destined. If Moon or Pluto makes challenging aspects from other planets in the natal chart, the partners might behave possessive or be jealous at one another.

There is a strong attraction between the partners. This can be a “love of my life” type of relationship. They might feel that they were meant to be together, and their encounter might happen through a set of might appear predestined circumstances.

Even if other aspects between their planets are challenging, this aspect might keep these two together and willing to make the effort to overcome their issues.

The Moon person will act in a way to neutralize the sometimes dominant and controlling nature of Pluto. Even though Pluto would have no problem manipulating and controlling their partner, they don’t feel inspired to do so.

The Moon person needs someone to protect them and feel secure in their presence, and the Pluto person often desires that role.

This aspect will fulfill both their needs, which is a significant reason to be satisfied in this relationship. They will both appreciate a partner in whose presence they are able to express their true nature.

The Moon person might feel hypnotized by the Pluto partner. This connection is often karmic and dates back from previous lives of the couple.

Because the trine is a harmonious aspect, this implies that the relationship was likely a harmonious one in their previous incarnations, filled with love which transferred to this life, and the people who are connected with it sense it on a deep emotional and spiritual level.

This aspect is strong and it can help maintain the relationship even when the other aspects between the charts are challenging and cause conflicts between the partners. They always go back to the mutual feeling of love and respect they feel for each other.

In other types of relationships this aspect also gives a sort of recognition people feel when they meet or when they interact with one another.

There is a strong sense of familiarity and feeling of “knowing the person from somewhere” even though you know you two never met before. They will be able to instinctively feel how the other person feel and do exactly what they need to feel better.

The trine contact between someone’s Moon and another person’s Pluto is an indication of a strong bond which probably exists between these two people, regardless if they are in a romantic relationship or not.

This bond sometimes has its roots in some previous incarnations their souls shared in the past.

Because the trine is a harmonious aspect, that indicates that the bond between them was also harmonious and that continues throughout this incarnation as well.

Even when these two first meet, there might be a sense of mutual understanding and recognition followed by a feeling that they have met before.

The connection between them is strong. They both get from this relationship what they need and desire. The Moon person admires Pluto’s strength and confidence, and Pluto enjoys having by their side someone they could protect and who admires them and their strength.

They both have strong intuition and have an ability to sense each other’s feelings. They will instinctively know what to do or say to make the other feel better.

If the Moon receives challenging aspects in the natal charts they might try to emotionally manipulate Pluto whose penetrating mind won’t allow being deceived.

Pluto is sensitive to any kinds of manipulation and disrespectful behavior and this Moon’s behavior will not be tolerated.

If, on the other side, Pluto has challenging aspects in the natal chart, they might be prone to manipulation and controlling behavior. If the Pluto person desires to do so, they might use their knowing of the Moon person weaknesses to hurt them.

With challenging aspects of both the Moon and Pluto, the partners might be prone to jealousy and possessiveness.