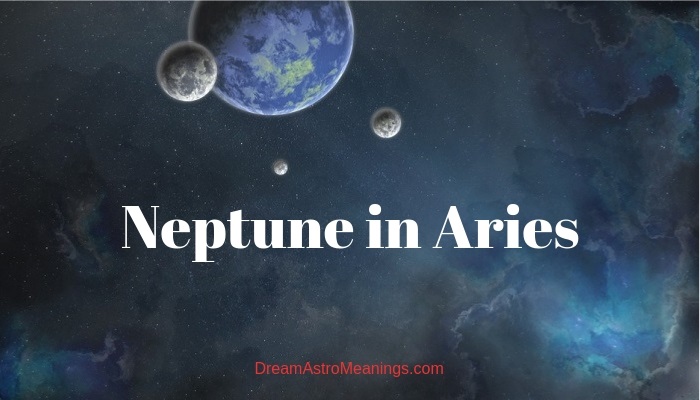 Neptune is a planet mostly distanced from the Sun. It is the third-largest in mass and fourth-largest in diameter. It takes 164.8 years for Neptune to orbit the Sun. It was discovered by chance and through a mathematical prediction. This planet has 14 moons. Its atmosphere is mostly comprised of helium and hydrogen, but it also contains ice, like water, methane, and ammonia. Its interior is ice and rock and its temperature is very cold, around -218°C.

This planet’s name came from the Roman god of the sea and freshwater, Neptune. It was the equivalent to the ancient Greek god, Poseidon. In some myths Neptune was considered the brother of the gods Pluto and Jupiter.

The nature of Neptune is delusional and deceptive. Nothing is ever certain with this planet. It rules manipulation and subversion. Its influence is delusive and cannot be easily explained with words. It symbolizes the unknown and yet undiscovered. It’s confusing and disturbing.

This planet inspires spiritual evolution and transcending the boundaries of reality and entering a new, unexplored world.

Neptune is a transpersonal planet and it takes around 14 years to transit through one sign. That means that it influences generations of people born during these 14 years, through the influence it has on the society and its evolution through influencing the areas ruled by Neptune as well as the sign it is transiting.

Neptune influences great spiritual and religious movements. People who have a prominent Neptune in their natal charts and are under the influence of this planet can be great idealists and dreamers. They tend to live in the imaginary world created by their minds, but are also very creative and able to create great works of art of unimaginable beauty.

These people are usually very spiritual and religious. They often have a heightened intuition and they can have an almost hypnotic influence on other people.

These people are very sensitive to other people’s feelings and can sometimes feel intuitively what they are thinking.

Some of them can be naïve and easily manipulated by others, but some of these people can also be very manipulative and prone to great deceptions to get where they want to be and get what they want.

Many of them are very compassionate and eager to help others. They are often involved in different kinds of charity organizations and devote their whole lives to helping others. These people can be prone to isolation and voluntary confinement for some cause.

The planet Neptune rules the underworld, but also criminal activities and prisons, and some of these people can be prone to illegal acts which bring them to jail where they spend a part of their lives.

They can suffer from mental illnesses or some nervous disorders. These people often suffer from different kind of weaknesses and are usually not very confident and self-assured.

That is why they are prone to dealing with their insecurities by using some means which help them ignore or forget about their issues, like drugs or alcohol, which don’t do anything to solve their problems and only help them grow.

Some of them can have different psychic abilities and are interested in the secret side of existence and occult sciences which they choose as their occupation and means to earn their living.

When determining the influence of Neptune on an individual, we need to consider its placement in the natal chart as well as its aspects to other planets.

We also need to consult the current progressions and transits to see if there are some significant contacts which could bring important events into a person’s life that person should be aware of.

In the text, we are giving some information about the traits of Neptune in the sign of Aries.

Men with Neptune in Aries can have repressed anger issues, expressing their negative feelings by not expressing directly their aggression and dissatisfaction, but instead keeping it inside and doing things behind people’s back to get back at them.

These men can possess some manipulative traits where they can provoke conflicts between people to satisfy some of their own interests.

These men can have problems expressing their emotions because they consider it a sign of weakness.

Women who have Neptune in Aries are either stay away from conflicts, or have conflicting personalities, and that all depends on the aspects Neptune is making in their natal charts and its overall influence on their personality traits.

These women can be very sensitive, but at the same time having issues with expressing their feelings.

They can react aggressively in situations where they should demonstrate affection, simply because they don’t know how to behave.

In some cases, these women can be prone to causing conflicts between other people just for the fun of it, or for some personal gain.

Some good traits of Neptune in Aries are:

Some bad traits of Neptune in Aries are:

Aries is the ruler of war and conflict. Aries rules physical activity, adventure, adrenaline, the head and the face, all the organs in the head, and diseases of the head, headaches, vertigo, etc.

Neptune in the sign of Aries is not a good combination of influences. Their energy is the opposite and doesn’t blend easily.

Aries is direct and concrete; it is militant and destructive, while Neptune is confused, disillusioned, weak, worrisome, manipulative, and deceptive.

This combination of planet-sign often brings global changes and influences related to matters ruled by the planet Neptune and the sign of Aries.

War or a conflict started during this transit doesn’t have much chance to be a successful one because of the confusing influence of Neptune causing bad decisions and actions of military leaders, loss of battles due to unforeseen circumstances, etc.

That principle could be applied to every other affair ruled by Neptune and Aries.

People influenced by Neptune in Aries usually have a lack of willpower and desire to succeed.

They can imagine great achievements in their mind, but at the same time lack the courage and persistence to achieve them. Most of their dreams remain exactly that, dreams because they don’t have what it takes to make them become their reality.

Because of that, these people might be prone to outbursts of anger and discontent without ever changing anything.

There are some opposite cases, where these people have more than enough courage and determination to pursue their goals successfully.

Some of these people can be prone to shy away from any conflicts and disagreements and could have a complaisant nature which agrees with everyone. They usually don’t have the courage to stand up to their beliefs even if they know that they are right.

In some cases, these people can be prone to manipulating other people against each other, creating conflicts between them, while staying on the side and observing them. They could be doing that to gain some benefit, or simply for the fun of being able to.

Some Neptune influenced people can be very deceitful, manipulative, and prone to using others to fulfill some goals.

In general, the nature of these people is secretive and they don’t do anything directly, always behind the scenes.

Although Aries is a sign of open approach and conflict, these people lack the courage to openly confront the ones who bother them, but have the skills to do them harm behind their backs, doing different kinds of schemes and manipulations which end up hurting those who have hurt them, sometimes without these people even knowing who was to blame for the misfortune they have suffered.

These people can be dangerous opponents especially because of their naïve appearance and seemingly weak nature. Most of them use that fact to their advantage and never reveal their true nature.

These people could in some cases suffer from some mysterious and hard to diagnose and cure illness related to their head and head organs.

When Neptune in Aries makes favorable aspects with personal planets that can make a person open in expressing their desires and opinions and going after their desires; if the aspects are negative in nature, the situation is different, and often creates confusion, surreal expectations and desires, inability to achieve them, doing things behind people’s backs, deceit, etc.

They often possess leadership skills which they combine with the skills of shrewdness and manipulative tactics.

This placement of Neptune could indicate starting of some new spiritual movement and ideas. It might also mark stronger interest in religion and militant approach towards spreading religious beliefs which could cause wars and conflicts.

Neptune is a transpersonal planet, which takes around 14 years to go through a single sign.

Because of that, this planet influences 14 different generations of people born within that time span. It influences the changes happening in Aries and Neptune related affairs, such as religion, spirituality, conflicts, etc.

Its influence on individuals should be determined as a combination of the sign, natal chart placement, as well as the aspects with other natal planets.

We should also consider the transits and progressions during the moment of analysis to see if there are some significant events possibly occurring in the person’s life related to the influence of Neptune.

This planet doesn’t influence everyone; only the people with prominently positioned Neptune in their natal charts.

Neptune in Aries people usually have great ideas and plans but they keep them in their imagination because they usually lack the courage to put them into reality.

In some cases, the situation is the opposite and these people have enough persistence and determination to accomplish their goals.

They can have a militant and aggressive approach to spreading their religious and spiritual beliefs.