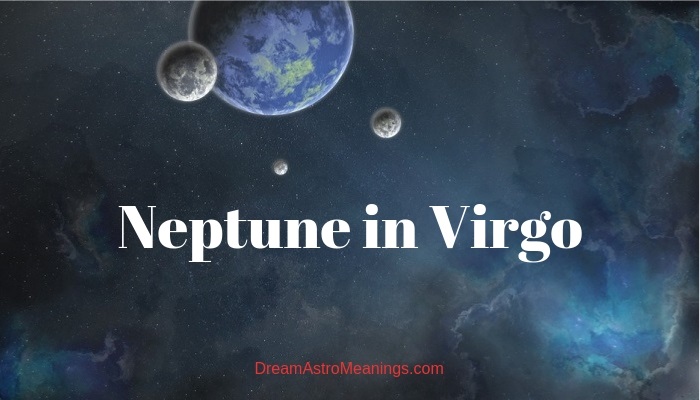 Neptune is the third heaviest planet, and 17 times heavier than Earth. It takes 165 years to circle around the Sun. It’s very cold, and considered one of the coldest in our Solar system, with a temperature of around -218°C. It’s composed of ice and rocks. Neptune’s atmosphere is composed of helium, hydrogen and partly ice.

This planet got the name Neptune from the Roman god of the sea and water.

Astrologically, the planet Neptune is also the ruler of water and water-related matters.

Neptune also rules our nerves and our nervous system. It is the ruler of nervousness in general and people with nervous and anxious characters.

Neptune also rules worries, obsessions, and weakness. It is the ruler of hospitals and hospitalization.

People, who are under the influence of Neptune, usually when Neptune in their charts is in bad aspects with personal planets, often suffer from lack of stability and confidence.

They can be prone to living a life full of illusions and imaginary realities. They can have difficulties accepting reality and be prone to escapism to avoid dealing with the issues they are encountering.

These people often lack the courage to face reality and instead choose to ignore and pretend that it doesn’t exist, or avoiding to take actions in dealing with. These people easily find excuses for their behavior and refuse to take responsibility for their lives and the circumstances they are in.

In many cases, these people turn to addictions to help them avoid dealing with their reality.

They are often prone to drugs or alcohol because they give them a false sense of peace and relaxation while the problems keep piling up and growing.

Another negative trait of Neptune is that it influences and encourages people’s illusions and false hopes about some matters and people. This influence can make us believe in things that don’t actually exist or believe in someone’s feelings towards which aren’t there. That can be very dangerous because it could cause disappointments and broken dreams once we realize the truth behind our false beliefs.

Neptune’s influence very often causes self-delusions, especially when there are bad aspects of Neptune with other planets. These people should be very cautious about their beliefs and try to live as realistic as they can.

This planet often causes a person to lose focus and get off the road towards their goals.

Neptune also rules people who are cheaters, prone to lying, deceiving and manipulating others. It is the ruler of schemers, manipulators, and con men of all kinds. These people are able to use their skills to use others and take advantage of them for their own good.

These people can sometimes be prone to criminal acts and their actions and behavior often leads them to problems with the law and end up imprisoned.

These people can be prone to isolating themselves and spending time alone. They often spend a part of their lives in voluntary or involuntary isolation, imprisoned or in hospital.

These people can experience problems with their mental health, and in some cases even suffer from some mental illness, which in the end causes their hospitalization in some mental institution.

In some cases, Neptune influenced people can be very naïve themselves, trusting that everyone is good and has their best interest in mind. They could be seen as easy prey by people who want to take benefit of their naivety and they could easily end up manipulated and used.

After such experience, disappointment and sadness come as an inevitable consequence.

Neptune also rules love and deep emotions towards someone. Depending on the aspects it makes in a person’s chart, it can either bring that person fairy tale romances in their life, or it can bring relationship disappointments, illusions, self-deception, and false hopes, which all ruin the person’s self-esteem and cause feelings of sadness and depression. Neptune is the ruler of love illusions and self-deception.

This is a transpersonal planet, and that means that Neptune’s transit through the signs of the Zodiac influences generations of people and society as a whole. Its transits bring transformations, events, and changes related to the affairs ruled by Neptune and the sign it is currently transiting.

Neptune takes 14 years to pass through one sign and people born during that transit will all experience its influence through the events and changes it will provoke globally. Neptune can cause changes and new healing methods in the field of medicines and healing of mental illnesses and conditions, nervous disorders and similar states.

It can also inspire some new religious movements and spiritual upheavals among masses of people.

People who are under the influence of Neptune are often very intuitive, and often appear as they know what others think and feel. Many of them have the ability to read people’s minds.

These people often have some psychic gifts, such as the gift of clairvoyance or some similar powers.

They usually use these gifts as a means to help themselves and others, and some even make their profession giving these services. They are usually very kind and helpful and enjoy helping people in any way they can.

These people are often involved in different kinds of charities and some even devote their whole life to some humanitarian cause. They can have a very idealistic outlook on the world.

Some of these people who don’t have such altruistic nature can be prone to use these gifts they have to manipulate other people or to have some gain. They can have an almost hypnotic effect on people and be able to influence them to do whatever they want.

Many Neptune influenced people are very creative and talented artists. They are able to create wonderful artworks of great beauty and value. These people are usually very spiritual and put in efforts towards strengthening their spirituality and faith.

One of the major issues of people influenced by Neptune is their lack of courage and self-confidence to confront the problems they are dealing with, and using all means possible to avoid dealing with them, even the ones which are detrimental to their health and wellbeing like drugs, alcohol or gambling.

Another issue these people could encounter is a tendency towards mental disorders and illnesses, especially the ones with Neptune badly placed and in bad aspects. Neptune rules insanity, and sadly, some people under its influence experience such fate, ending up in some mental institution.

Neptune ruled people are also into all kinds of mysteries, secrets and secret knowledge.

It’s important to note that Neptune doesn’t influence everyone, and some people don’t feel its influence at all. The ones who do feel its influence the most, are the ones with Neptune badly positioned in their natal charts and in bad aspects to their personal planets.

In the text, we give information about the traits of Neptune in the sign of Virgo.

Men with Neptune in Virgo can be very reliable and responsible.

They are usually aware of their actions and have things under control. They are excellent organizers and often perfectionists, with an eye for details.

If Neptune is badly placed in their charts, these traits could be distorted and they could instead be very disorganized, sloppy, and lacking the focus of their actions.

They are often found in the service business or the business of producing food. They promote healthy living and try to take care of their health and overall wellbeing. They have natural healing abilities and often choose the medical profession as their occupation.

Women with Neptune in Virgo are usually very precise and responsible. They don’t lose anything from their sight and always try to keep things under their control.

If Neptune makes bad aspects with personal planets in their chart, they can be quite the opposite.

These women could be very disorganized and irresponsible.

These women usually love to serve and help others.

They enjoy it when they can help someone achieve their desires. They often find themselves involved in some charity, pursuing some humanitarian goals and helping people. They can be true perfectionists and often very crucial because of that.

Another flaw they could possess is a tendency always to think they are right which annoys other people and makes them avoid these women.

Some of the good traits of Neptune in Virgo:

Some of the bad traits of Neptune in Virgo:

– perfectionists, critical, the need to have everything their own way, they believe that they are always right, disorganized, lacking focus, sloppy, missing details, easily irritated, impatient, manipulative, etc.

It rules libraries, librarians, bookkeepers, editors, editing, literary critics, accountants, accounting, and accounts. It rules organization and people great at organizing. It is also the ruler of interpreting, teaching, teachers, mathematicians, and mathematics.

Virgo is also the ruler of medicine and the medical profession.

People with Neptune in Virgo love being of service to others and are often in a position to help other people through their work and occupation. These people are often in some services business where they have the chance to satisfy the needs of many people.

Virgo is the sign of perfectionists and good organizers, but when Neptune is in this sign and badly placed in the chart of an individual, it often happens that the person lacks focus, eye for details, and basic organization skills.

These people can also be very critical and not allowing anyone to say their opinion and always believe that they are the only ones who know the truth. They can be very impatient and easily irritated.

Neptune in this sign can bring global awareness about the healthy way of eating and encourage people to go back to their origins and the way things were before civilizational development changed everything.

These people are usually helpful and love helping people. They are also gladly willing to participate in some humanitarian cause and help others.

If Neptune is badly placed they can use their intelligence and other abilities to manipulate people for their own gains. If the aspects are good these people are usually loyal, responsible, and reliable.

They try to take care of their wellbeing but also the wellbeing of the planet. They can sometimes be perfectionists.

Neptune in this placement often brings some innovations and discoveries in the fields of medicine and healing.

Neptune takes 14 years to transit one sign. That’s why its influence on people during this transit is not individual, but rather global.

Neptune influences changes in the global perception of matters ruled by Neptune and the sign it is transiting through, as well as changes and events ruled by these matters.

Its influence on a person should be determined as a combination of Neptune’s placement in the natal chart and its natal aspects, transits, and progressions.

People with Neptune in Virgo are usually organized and have the skill to organize other people. They usually have an eye for details which helps them in their profession.

If Neptune receives bad aspects from other planets, especially the personal ones, the person could be disorganized and lacking focus. They are usually kind and helpful, but can be overly critical and easily irritated.