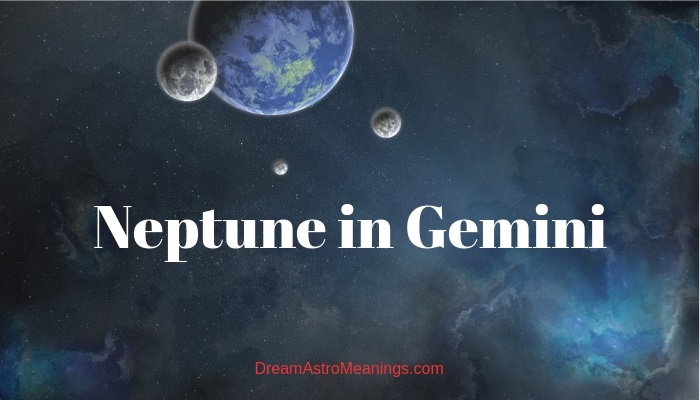 The planet Neptune is at the farthest distance from the Sun. This planet is the third in mass and the fourth in diameter out of all planets in the Solar system. It needs around 165 years to circle the Sun and spends around 14 years transiting one sign of the Zodiac. Neptune has 14 moons, with Triton as its biggest moon.

The atmosphere of Neptune is mostly helium and hydrogen, but also ice. Its interior is mostly composed of ice and rock. This planet is very cold, with a temperature of around -218°C.

The planet Neptune got the name from the ancient Roman god of fresh and saltwater, Neptune. This god was equivalent to the ancient Greek god Poseidon.

This planet also rules problems with addictive behavior and different kinds of addictions, such as alcohol and drugs. It is the ruler of alcoholics and drug abusers. It rules bisexuality, perversion, perverts, bigamists, polygamy, and all kinds of scandals.

Neptune makes things uncertain and vague. It creates delusions and deceptions. It is the planet of manipulation and influencing people through subliminal influences. It is responsible for the greatest works of art created.

Neptune symbolizes secrets and places yet undiscovered. Its influence causes illusions, confusions, lack of focus, and can be very disturbing. It is the planet responsible for spiritual evolution.

It is a transpersonal planet because it takes around 14 years to go through a sign, which makes it difficult to influence individuals through the qualities of the sign it’s transiting through. Instead, this planet influences these generations of people born during this transits.

Neptune influences society changes and affects the areas ruled by the sign it is transiting through as well as the affairs ruled by Neptune.

This planet influences the rise of new spiritual movements and or new religions. It sometimes marks the rise of influential religious leaders.

People who are strongly influenced by Neptune are dreamy and have a vivid imagination. These people are idealists with a tendency to hide in their imaginary world where everything is perfect.

They are often very spiritual beings and some are very religious too. Many of them have psychic abilities and gifts and strongly developed intuition. Some can even have a hypnotic effect on others being able to manipulate them into doing things they don’t want. They can be very creative and able to create beautiful things.

People influenced by Neptune are very sensitive and many of them have the ability to sense other people’s feelings and even read their thoughts. They might be very intuitive and have some psychic gifts.

These people usually use their abilities to help others, but some of them use these abilities to use and manipulate other people to do things they don’t want so they can have some benefit. They can be very deceptive and prone to lying.

On the other hand, some of them are very naïve and can easily be manipulated by others because they have a tendency to trust people and believe that everyone is good and has good intentions towards them.

These people can be very kind and compassionate and always ready to help others. They are true humanitarians and often do charity work or participate in charity organizations devoting their time and some even their lives to helping others.

Some of them can be prone to isolation and voluntary confinement for a higher purpose.

Many of these people are in a quest to gain spiritual knowledge and develop their spirituality further.

In some cases, these people can be prone to criminal activities, theft, kidnapping, blackmailing, persecution, assassination, forging, smuggling, etc. and finally ending up in prison. Some of these people are destined to spend a part of their lives in jail.

This planet rules nervous disorders and mental illnesses. People influenced by Neptune often suffer from lack of self-esteem and lack of courage. They often have a weak character and tend to shy away from problems instead of dealing with them.

Many of them are prone to addictive behavior, using drugs or alcohol, which helps them to forget about the issues they are confronting even though the problems continue growing. Some of these people can suffer from serious mental illness, and they are mostly the ones with badly positioned Neptune in their natal chart.

These people can have a strong interest in the mystical side of life and the occult sciences, and many of them devote their lives to studying them and even choose them as their occupation.

If you want to determine whether Neptune strongly influences some individual, you need to consider not only the sign where it is placed, but also the natal chart house where Neptune is, as well as the aspects it is making with other planets in the chart.

It is also important to consider the current transits and progressions and determine whether there are some important Neptune contacts pointing out to some important transforming events in this person’s life.

In this text, we talk about the traits of Neptune in Gemini.

Men with Neptune in Gemini are very intelligent and quick-witted. They are good with words and express with ease what is on their minds. These people are very curious and always in pursuit of new knowledge.

They are talented writers and often make a career in this area. They are often successful fiction writers, especially in the short fiction stories genre. They can also be successful journalists, publicist, editors, etc.

These men love driving and usually love fast cars. They also love to travel and many of them are frequent travelers who gather their experiences for their writings in this manner.

They can be prone to stress and anxiousness, and usually are nervous types.

Some of them, with badly placed Neptune in their chart can be prone to mental disorders or issues with memory and concentration.

They are very communicative and easily start conversations with people.

Women with Neptune in Gemini make a very interesting company.

They love studying and expanding their horizons, which is one of the main reasons why these women devote much of their attention to their education. They are talented writers and have prominent communicational skills, both oral and written.

These women can be prone to gossip and gathering information about other people, usually without any specific reason.

Some of them could use this information for some personal gain.

These women can be very manipulative and use their tactics to make other people do what they want.

Some of these women can be prone to lying and deceiving others. They are usually innocently inquisitive.

Some of the good traits of Neptune in Gemini:

Some of the bad traits of Neptune in Gemini:

People with Neptune in Gemini have many interests and usually have difficulty deciding which ones to pursue. They have excellent communication skills and often choose a career related to communication either verbal or through written words.

These people are very intelligent, but many of them can have problems with nervousness and getting stressed out easily. Their weak spot is their nerves, and they can be very fragile.

This is not a good position for a person who has Neptune as a ruler and badly positioned in the natal chart. It could point out to some kind of mental disorder or in worst cases, mental illness.

These people have a vivid imagination and combine it with their huge experience to make great writing pieces. These people can be very talented writers and successful in that profession.

They have the talent to express their thoughts in a beautiful way and they can choose to write them in different literary genres, but their preferred are usually short fiction stories.

Some of these people could have issues with their concentration and memory. They might have difficulty focusing on one subject exclusively and as a result not being able to memorize well the studied information.

These people love to learn new things and are often very educated. It is safe to say that many of these people continue educating themselves throughout their entire lives.

With bad aspects of Neptune in their charts, they might be prone to lying, deceptions, manipulation, and all kinds of immoral behavior to achieve their goals. They can also be prone to gossiping and misusing information they have about some people for material gain.

Their minds never stop working, and they continuously keep gathering data, which they could or could not use some day. They have a hard time deciding what they want to do in life. They often lack focus and persistence and change their goals before accomplishing the previous ones.

This lack of endurance makes them appear unreliable and confused even though that is not the case. They can be very responsible when they have some important task to finish.

Some of these people truly are unreliable and lose their interest quickly. They can be disorganized and have difficulties settling their minds. These people are great at lecturing and teaching others about the information they have.

They also love traveling, and they usually travel a lot, especially on short distance trips. They are very communicative and usually have a large circle of friends and acquaintances around them.

Neptune is a planet which takes around 14 years to go through a sign. This means that it influences the generations of people born during this period and share the same traits. This planet influences the changes and events related to the affairs ruled by Neptune and Gemini.

Not all people feel the influence of Neptune. This planet influences individuals who have Neptune as the ruler of their charts, or Neptune in heavy aspects with other planets in the chart.

It is also important to consider the aspects in transits and progressions with Neptune to make a clear picture of the potential influence on a person during the current moment.

Neptune in Gemini people are interesting and knowledgeable people. They are very curious and in pursuit of knowledge. They are talented writers and good at expressing their desires and thoughts to people. They are communicative and love to be around people.

In some cases, especially with badly placed Neptune in their charts, these people could be prone to mental illnesses or other kinds of mental disorders and issues.