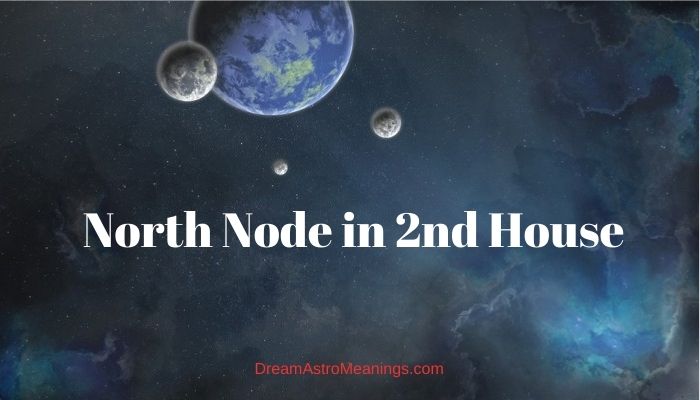 They form an axis in the Zodiac which, being the result of the crossing of the races of the Sun, the Moon and the Earth, it can be considered the axis of Life and therefore a force.

On the day of our birth, the Nodes appear in a certain axis of signs and houses.

The South Node represents habits, attitudes and behaviors that for us are “easy”, deeply integrated and therefore indicate the path of least resistance. But this path is often not the most positive path and is not oriented towards growth on which to walk.

It is for our greater profit that we take the “path less practiced”, that is the one useful for nourishing and cultivating the qualities and behaviors that represent the exact opposite of our old models.

This means making precise (and sometimes painful) efforts. For the construction of new attitudes that correspond to the house and the sign of the North Node.

Although this interpretation appears rather psychological, it has proved to be very functional from an esoteric point of view. Many astrologers consider the “models” represented by the South Node as part of the karmic heritage, a mold from our past lives that must be overcome in order to continue to grow.

If we go beyond these patterns we will build a “good karma”, developing the qualities symbolized by the North Node.

An important theme that emerged from the study of the axis of nodes is that of the Nodes seen as a path that the soul must follow, a path separate from the desires, needs and stimuli of the body and the physical world.

So the nodal axis as a unit refers to the journey of the soul, with the South Node representing the direction from which the individual is coming and the North Node the one in which he is heading.

That being the case, it is no wonder that the South Node is seen as negative, as if those who are living in tune with it are somehow blocked rather than moving forward.

We can strongly lean towards a Node, especially the South one, because this brings us back to ancient models belonging to our past and, later on, we can turn to the other Node, but we can also reach a balance between the Nodes when both sides have been experienced and we have had the opportunity to verify how the two aspects serve us in the development of our life.

Many talented people have natal planets in conjunction with the South Node, a trait that often indicates a strong soul memory, rapidly awakened in a particular sector of life.

So some people’s strength may lie in what they bring from the past; however, if their life is focused solely on this, they are not achieving a balance between the Nodes and perhaps they are not growing or pointing towards the North Node as they should.

The crux of the problem, therefore, consists in seeing in the North Lunar Node the point of personal and intellectual growth and in accepting and cultivating it in a conscious way as “ascent”.

As for the axis of the Nodes, the North one manifests itself as a step forward, the South one as a look backwards. In order to easily take a step forward, it is first of all necessary to overcome the strength of the South Node, which tends to act in the opposite direction.

There is something in us, in the group or individually that is opposed to changes of any kind. There is something in our response to life that is purely instinctual and irrational, that needs to make us feel inserted in the patterns and rhythms of time, nature and family customs and habits.

This part of us loves to know and work on what we are able to do and understand. Look for security. There is nothing wrong with this approach. We need it. But the result would be stasis if there was no challenge in life to this way of being.

Therefore the axis of the Nodes symbolizes the struggle of a whole life.

The Second House, traditionally associated with the sign of Taurus, represents the environment that the subject is around immediately after birth, an environment that can be hostile or welcoming, wealthy or disadvantaged, benevolent or severe.

We therefore speak of the natural habitat. Not to be confused with the family unit, the parental figures and the family home, symbolized by the fourth.

This area of ​​the birth chart is about what we have from birth, and it gives us information about the assets inherited from the family, about specific properties that include earnings and our ability to influence them, investments and movable assets (cars, clothes, jewelry and similar).

The approach to money, our resources and how to manage them, the acquisition of wealth (and debt), financial setbacks, savings, budget to be respected and financial status are all governed by the Second House.

From this it is clear that the Second House represents in a broad sense our personal security, which is strongly linked to what we possess: real estate, money, food, clothes, are all things that make us feel safe, and tend, in many cases, to increase our self-esteem.

It is no coincidence that this house is associated with the sign of Taurus, a sign that roots us in our bodies and identifies our right to exist and to have everything we need to survive.

Self-esteem and personal power are closely linked to this house, which when it is severely damaged can indicate a sort of inaction, but also economic problems or blunders in this sector.

The second house is a “successor” house. Successive houses (II, V, VIII, and XI) have the purpose of stabilizing the previous houses.

It is the second house that adds consistency to personal identity, symbolized by the Ascendant, defining what we possess, resources, physical characteristics and limits.

It carries secrets of past lives that look carefully, it cannot come to light as guilt prevents movement. Its interior is so secret that no one can really be described as ex.

Since you have lost your values, try to find them in others and it is difficult to understand why others appreciate your actions. Since he has nothing to lose, he has a hairy back and pretends to be acting with the traits of others.

They also carry a residue of sexual abuse, the woman through sex dominates and takes advantage of men, and in the case of the man she uses it to favor the ego. Sex appears to be a means of obtaining something.

They are also jealous, they feel alienated from society like a child trying to be saved or freed.

It keeps them frightened of death as it considers it a punishment for all bad deeds of past reincarnations. When you don’t get what you want, blame others for not getting it. Only when the value of the north node in his second house will reach rebirth.

The memory of past lives must emerge from death in this eighth house for the soul to progress. To get out of it, you have to develop and build on an honest basis, not through the efforts of others, what you get has to be because you have won.

The sign that contains the south node indicates the forms in which the individual in the past lives if he has an interest in others while the sign of the north node shows how to build a new system of values ​​on life.

It is in the second house that our grounding capacity resides. A solid foundation and roots firmly planted in the ground are of paramount importance for the stability and solidity of anything.

The ability to know how to manage and use personal resources in the best way will inevitably have a positive impact on other areas of our life and will also give us a sense of effectiveness that will positively reflect on our self-esteem.

This part of us loves to know and work on what we are able to do and understand. Look for security. There is nothing wrong with this approach. We need it. But the result would be stasis if there was no challenge in life to this way of being.

Therefore the axis of the Nodes symbolizes the struggle of a whole life.

A conscious and effective management of our resources the ability to create money allows us to feel rooted and to be able to create a safe and comfortable environment to stay, and therefore to realize our need for personal security.

The second house therefore has a much deeper dimension than that of money and possession, because it is responsible for keeping us on our feet, supporting us, staying in our dimension and occupying it with awareness.

Money, possessions, real estate are therefore the means, but not the end: they simply serve to root us, to give shape and substance to things, to give us a secure base without which we will live in chaos.

It is true that money does not create happiness, but it can help us achieve it. It is with money that you can go on a trip, buy a dress, beautify your home, but also do well. Having also allows you to give, and therefore to create an exchange.

A second home in distress can manifest itself with the individual’s difficulty in living in the practical dimension of existence, in creating a secure base.

Existential insecurity, a sense of weakening are typical of a second home that doesn’t work.

Another problem with a second home that is too full, or strongly stressed, lies in the tendency not to want to look beyond the reassuring limits of one’s own backyard, while the opposite house, the eighth, accepts to take those risks and challenges they are the only true passport to a life full of meaning.

Each house exists in function of the other, and therefore the rooting of the second house must also open up to the renewal of the octave.

The values expressed by the second and eighth houses must work together, so that life is a continuous process of construction and continuous regeneration.

Nothing lasts forever. Even the material goods that you have one day may no longer be there or in short supply.

On the other hand, tying one’s image exclusively to the possession of material goods, and therefore to status, becomes highly reductive and exposes the person to certain failure, because if I am what “I have”, then when I do not “have “I’m no longer anyone.

Psychological stagnation, immobility, excessive attachment to goods and things can be overcome by looking at the eighth house, which reminds us that emotional and psychological resources are more important than material ones, because our inner wealth cannot be taken away by anyone.