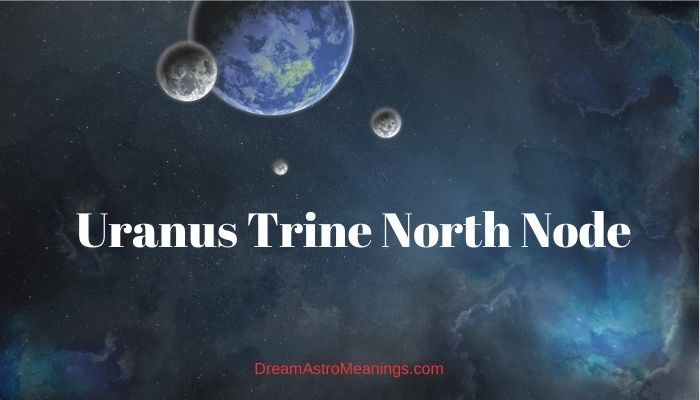 Change, inventiveness and knowledge, freedom, individuality, rebellion and revolution, unpredictability, originality, openness, variety and surprises: Uranus is a planet that was only discovered in 1781, significantly before the French Revolution.

Social upheavals such as revolutions, but also fascism are under the sign of Uranus.

It is attributed to primarily affecting groups, generations and age groups. Uranus influence always brings changes with it.

Uranus is in the sign Aquarius and in the eleventh house. It is the first transsaturnian planet that is twice as far from Earth as Saturn: about 3 billion kilometers. It orbits the sun in 84 years.

Uranus is a spiritual planet and is seen astrologically as the higher octave of Mercury. Insights that open up through this planet are lightning-fast and uncontrollable.

Other aspects that Uranus embodies are also not controllable in the classical sense. But man can be open to this principle and try to incorporate the ideas symbolically given by Uranus into his own life.

In general, the astrological descriptions of Uranus are still relatively vague. Food for thought, upheavals, revolution, dictatorships and energy impulses are approximate descriptions.

Possibly this is due to the fact that Uranus is a relatively “new” planet and first experiences have to be gathered that have existed with other stars for thousands of years.

If Uranus is strong in the horoscope, the people concerned tend towards individualism, originality, inventiveness and openness. They are always good for surprises or their life takes surprising turns or comes up with unexpected events.

Revolutionary ideas and intellectual discoveries that affect the common good are also at home here. People with a strong Uranus want to be independent and free, but they also want to change things.

Negative aspects are intolerance, insubordination, inner unrest and unpredictability, including utopias. Allegedly, Uranus is said to have a negative effect on marriages and partnerships.

On the positive side, Uranus shows new possibilities, also in terms of the collective.

Since Uranus is an uncontrollable principle – just as social upheavals are not controllable, the question arises how the impulses of this planet can be appropriately integrated into personal life, about the gifts of flashes of thought, knowledge and Making openness to new things fruitful.

The lunar nodal axis is of great importance in karma astrology. It describes the tasks to be mastered in this life, our inner development goals and tells us a lot about old patterns and behaviors from the past.

In Buddhism and Hinduism, karma denotes the law of cause and effect based on the intention behind an action. Both good and bad actions and thoughts of a person determine the fate.

The consequences do not necessarily have to take effect in this life, because the teaching of karma is connected with the rebirth of the dead souls.

Accordingly, each of us brings old karma with us from previous existences, which should be removed in this incarnation.

If you want to take a look at your life’s task, the hidden life plan or your pre-natal decision as to what should be learned and done in this life on earth, you should look in particular at the lunar node axis.

Many astrologers see them as the quintessence of our biography. It shows which conditions we should say goodbye to, since a maturation process is no longer possible and shows us the path of greatest inner growth.

All in all, useful things from the past should be retained and supplemented with new behaviors to complete the personality.

In the first half of life there is a tendency to hold onto what is familiar; only frustration, strokes of fate and existential needs lead to change.

From a geocentric point of view, the sun moves around the earth. This is the so-called solar path, which we call the ecliptic.

The moon also circles the earth, but its orbit does not coincide with the ecliptic, it deviates by 5.9 degrees. The points of intersection at which the sun and lunar orbits intersect are called the lunar nodes.

During the monthly orbit of the earth, the moon cuts the sun’s orbit twice: once in a north or ascending direction and two weeks later in a south or descending direction. The two lunar nodes are always polar opposite in the zodiac.

It moves slowly backwards, i.e. from Aries to Pisces, then to Aquarius, etc., takes about 18 ½ years for a complete cycle and is generally interpreted in the horoscope in the signs and individually in the house placement.

The ascending moon knot, also called the dragon’s head, stands for the conscious, willful development of the personality and shows the way of fulfillment (sun), the descending moon knot, also known as the dragon’s tail, symbolizes unconscious experiences brought with us from the past (previous incarnations) and seduces us, to keep old habits (moon).

All in all, the here and now is about the synthesis of two opposing qualities.

It is there that the Ascending Node is aimed to connect the personal forces of the individual with the forces of the soul, in order to reintroduce social consciousness and something more. He can lift you to an almost unprecedented peak of self-realization in love, business and, as well as provide inner peace through independence and an exciting sense of success.

For the first time, a young man, through the power of contrast with his beloved, the effect of opposition can find out what he is. They are attracted to grandiose ideas and abstractions, but the lack of the ability to look at things from the outside often slows down the implementation of ideas.

The unworked Chironic Virgo is drowning in the chaos of small material details for her.

At the age of 25, the North Node joins Uranus in the X House, while Uranus passes. This is one of the indications of the need to implement the debt program on an event plan.

The fact that the 10th House is a royal sign, in Leo, Mars rules the 7th House of relationships with the outside world, confirms that the partners of Rubens’ life were dukes and kings, high-ranking and influential people.

If it is dangerous for a young person to be too immersed in himself, the older person needs to give himself serious attention.

In connections and contacts, they do not tolerate any restrictions, they are looking for new and original forms of communication. With the correct use of the Lunar Node Axis, the 4th house will turn into a source nourishing the roots and feelings of the personality, connecting it with the origin and inner know-how.

Unusual appearance, great growth, mobility, the meaning and consequence of the great geographical discoveries of the mind, quick reaction, extreme personality. With a negative manifestation, Ketu gives unexpected troubles or some kind of fatal predisposition to unhappy events in this life.

This underestimated restraint, Wagner was able to clothe a significant musical form, giving it subtle romantic colors and bright halftones. Everything noted and presupposes the Ascendant of Libra and the harmoniously aspected day of his birth Venus. You cannot be the right time and the right place, take a chance, something always gets in the way.

Although the only unfavorable aspect of Mercury with Saturn is not capable of completely destroying the relationship of two loving people, but if it coexists with several more difficult configurations of Saturn, then this may already be too much. These people usually have unusual relationships at work and in the immediate environment.

Life calls us to this power and wants to pour out all its grace on us if we turn in this direction, and do not stubbornly turn towards the southern node.

Neptune always poses an internal problem, but sometimes with the help of the most difficult external circumstances.

Some of them under certain conditions behave in the same way as uranium is extracted with the same organic solvents, settle on the same ion-exchange resins, and precipitate under the same conditions.

Capturing a free neutron, the nucleus of the uranium 235U isotope fissions, while a sufficiently large energy is released per uranium nucleus, mainly due to the kinetic energy of fragments and radiation.

By the way, the South Node is also involved in conjunction with Uranus. Frigidity is possible, refusing love to another, a person causes suffering to himself and his partner.

Good for businessmen sociability, dexterity, resourcefulness, diplomatic ability, an objective look, always picky, will not follow the lead of his feelings, lives by his own mind. I take the view of the South Node as a point of regression, pushing us back the swamp and do not consider it to be of great value. He sells art and oriental rugs all over the world.

However, this is not the same as it is very important, especially in the early stages of life.

Where the South Node operates, a person’s social programs seem to be familiar with everything, and these types of social relations are well known to him, but for him they are standard and they can be used within reasonable limits.

In the chart of my loved one there is an almost exact conjunction of the North Node with Uranus, the royal degree, which is in conjunction with Neptune.

If Jupiter is somehow connected with these points, then this sign is very favorable, and this configuration is able to neutralize the influence of many unfavorable aspects.

And finally, the four most important fixed stars, marking the quarters of the celestial sphere, which should be located in accordance with the solstice points, as a result of precession, slowly move away from their proper position, indicating the fallen state of the Universe and marking the longest of all cosmic cycles, the cycle of time as such.

Node Excitability in the presence of other people.

Similar to the connection of the inner planet with the Lunar Node, which we talked about in the previous chapter, the outer planet of the connection with the North Node indicates those qualities that should be consciously developed during the current incarnation.