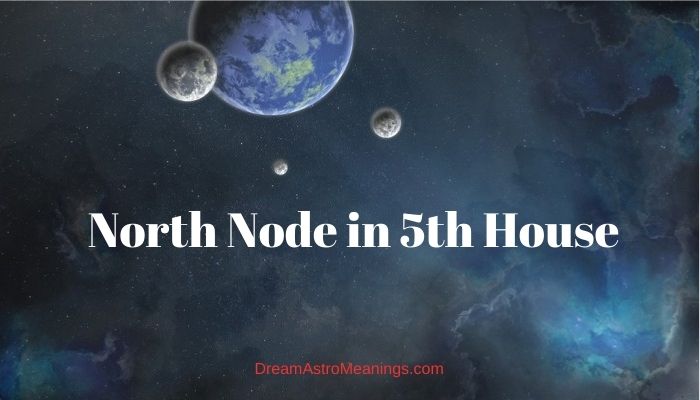 We must learn to evaluate the power of desires, overcoming dreams and becoming the architects of one’s own existence, in a non-selfish way.

It is necessary to observe self-discipline to guide oneself through reality.

The ascent is found in the willingness to take risks and experiment, without fear of giving up something, or losing one’s face.

The North Node distributes Karmic energy as it will be used in this life.

It will manifest itself more at the level of the house of which sign, (although this is also important), and there it will tell us in which sector the experience will be carried out.

Starting from the House occupied by the North Node, the energy is distributed following the lines of force of an equilateral triangle that associates Houses that complete the study.

The first triangle that we will study will be that of Fire that relates Houses I, V and IX which are connected with the individual growth of the being and its level of consciousness.

People with the North Node in one of these Houses are usually favored by fate at the level of social elevation, their role is to redistribute knowledge and wisdom to other groups.

This position usually appears in the letters of spiritual teachers, as well as those of advanced science practitioners who help in the evolution of the planet.

These people, exert a certain influence on their environment, are intelligent and have a high level of consciousness.

Instinct pushes them to fulfill their Karmic purposes, which are presented to them in the form of a vocation from a very young age.

In House I the Lunar Node favors individual growth, in House V the elevation of individual consciousness and in House IX it will make the person wake up spiritually and express it.

The more planets there are in these Houses, the greater the intellectual implication of the person when it comes to taking responsibility psychologically and spiritually for others.

The second triangle belongs to the Earth element and groups Houses II, VI and X. People with these positions take great advantage of the gifts developed during a previous existence in the material order.

They are the economic builders of the planet, their purposes are to ensure each his subsistence and watch over the earthly nature of our planet. They are endowed with strong materialistic tendencies, and their objectives are reflected in managing wealth, matter, and food.

The risk of being poor is minimal, although they should not be too confined to the certainties linked to their situation (house II), or to the force of an overly objective critical and logical spirit (house VI), they should not focus on a sterile system of thought, or in a race for the acquisition of material goods (house X).

The third triangle immerses us in the structure and tradition, and belongs to the Air element. It includes houses III, VII and XI of the letter, with this connotation the person is motivated by spiritual and intellectual qualities, and its objective is to ensure the harmony of society while preserving its structures and traditions.

They are the most participatory, gifted in equal parts to give and receive orders, executing them with intelligence and fidelity.

Although they have personal autonomy and character, they seek above all communication, insertion and participation.

It is a group that knows how to maintain a balance between material achievements and personal evolution. They are generally balanced people, and they are balancing for others. The fourth triangle regroups the three signs of Water, and is that of obligations and service.

The Houses that it connects are IV, VIII and XII. In this triangle there is a great potential for personal elevation, but this potential does not come into play until the person is able to invest their energy in the service of others, everything they do for their own benefit will be doomed to failure, guided by ” something”that does not allow them to deviate from a path drawn from another plane.

Of all the groups, this is the one that has the least free will and, although we must not generalize, it must be recognized that these people are in the crosshairs of destiny, but they can have both a debtor objective due to past faults, and a project of elevation and self-improvement.

It is not necessary to believe in reincarnation or the existence of previous lives to benefit from this process, but if you believe that life has some purpose and meaning, it will be easier for you to grasp the meaning of this concept.

Nodes are points in the sky where the Moon intersects the Earth’s orbit around the Sun. Your north and south nodes are, consequently, represented by two signs that are diametrically opposed to each other in the cosmos.

The study of the Lunar Nodes teaches us that these are an energy based on an invisible axis, which is called the axis of the Dragon, and through which the energy flow of time runs from the past to the future.

Astrologer Mohan Koparkar describes it as “a tube in a vacuum that connects the ignored past with the known of the present.”

This virtual axis is the south and north point of intersection between the plane of rotation of the Moon around the Earth and the plane of the Ecliptic.

It is situated at the point of convergence of the Moon and the Sun, and to understand it better we have to understand what the Moon means within us; the Moon reflects the cosmic energies of the Sun, Venus and Mercury, masters of the subtle and superior planes of man.

It governs the activity of Mars, the Karma manifested in man, the activity of Jupiter and Saturn, the Space and Time that hold man in manifestation as long as he is not capable of shedding terrestrial forms and thoughts.

The Moon is a great receptor filter for cosmic energies, which protects us from those degrees of consciousness that we could not bear.

In the following posts we will talk about the 12 astrological houses in the birth chart, the scenes of the movie of our life, where we can appropriate and find the purpose of our existence.

With a 5 house in good shape, it is usual for people to do well at gambling or speculating with money. So if you want we can play half and half of the Ballot … I am not so salty in that house.

Because the 5th house in astrology is known as the house of enjoyment and pleasure, and it also represents everything that has to do with our creativity and need to express and enjoy who we are as individuals. Being the house of the sun or Leo, it is where you want and can shine … feel special.

He also tells us about our romances, our artistic ability, hobbies and if we are regulars to sports or rather little.

But we also know about our children and the relationship we will have with them and with children in general, and therefore, our possible ability to teach.

If you have cool planets in this house it indicates that you enjoy life and it is easier for you to do so. It can also indicate healthy and happy children if you have them, as well as a good relationship with them in general.

Venus or Neptune in this house can indicate great artistic or creative ability and why not, fortune or joy for love. With Mercury, who has the ability to express himself and be a great writer or who enjoys intellectual subjects in general? Well, and also that it is well flirtatious, itching all over the place.

Mars, a person with a gift for command or a great athlete, something that he could take advantage of in the future … but also children who have earlier than expected … With the moon, numerous children, then, plan … Jupiter indicates the possibility of children who will be lucky, or who have the ability to be a great teacher.

Stop balls at your house 5. Who can stop working not on what is his turn but on what he is passionate about, or that one of his children is the new Lady Gaga or the next Messi.

Here the individual must come out of his fantasy to come down to reality. In past lives he dedicated himself to the satisfaction of their desires.

He is used to living in a dream world being an observer of others, becoming an ingenious being, capable of elaborating different plots based on his daydreams.

Always looking for different elements for his own dreams, he is the least practical person in the zodiac and never ceases to be surprised by the oddities that he creates in his own mind. He ends up becoming a toy of his own dreams, his karma is to learn to use his dreams to help him in life.

When he comes down to earth, he looks for friends in whom he identifies the characters of his dreams, he directs his mind towards the future creating a science fiction tale of that time that he does not yet know but that he loves to meditate.

He accuses his work or his childhood as causes of his difficulties, but in reality this does not matter to him, his frustration arises from the great distance between his dream world and the current reality. He constantly struggles to break down the barriers that exist between his dreams and reality that struggle takes away the energy to create his own life.

The north node of the 5th House allows you to create your own destiny, you will have to unite your thoughts and dreams to create your own life. You must be responsible for your dreams since in this nodal position they can be materialized, understand the power of your desires and will experience their consequences.

He has to learn that the south node of his eleventh house that is under the direction of Aquarius should direct them towards humanity, since the more he does for the rest, the more he will receive, if he inverts this position he will cause his destruction, because creating for himself, it will end up exhausting it.

Your lack of commitment resulting from the residue of your past lives will bring you conflict in your marriage or in your relationships, unless these nodes fall into the signs of water and earth.

When you realize that your dreams block your reality, that they are useless for the future, there you will be able to abandon them and focus on what you are creating in the present.

To become a reality maker you must put aside all your dreams personal skills and learn self-discipline so that you can guide yourself.

The sign of the south node reveals how dreams of other lives continue to appear in this life, the one that contains the north node tells you how to creatively apply your dreams to reality and thus develop everything that you have inside. Some souls have experienced cosmic consciousness in a previous life.

Of all the groups, this is the one that has the least free will and, although we must not generalize, it must be recognized that these people are in the crosshairs of destiny, but they can have both a debtor objective due to past faults, and a project of elevation and self-improvement.