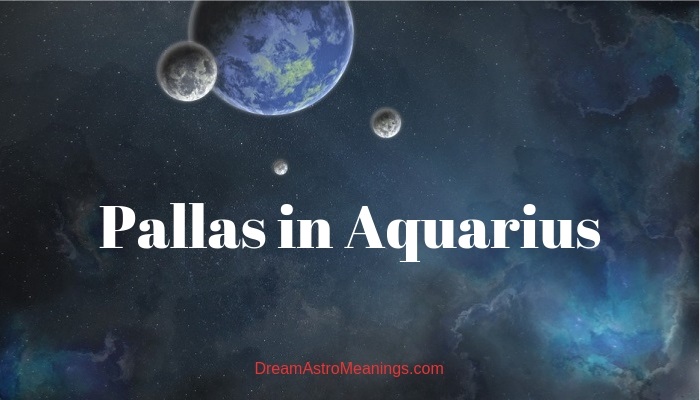 Pallas is the second in line discovered asteroid, following Ceres, and one of the largest ones in our Solar system. It is the third in mass existing asteroid. This asteroid was discovered by the astronomer Heinrich Wilhelm Matthäus Olbers in 1802. First it was considered a planet like all the other asteroids. Its surface is mostly silicates.

The name Pallas derives from the ancient Greek goddess Athena, the goddess of wisdom, whose alternate name was Pallas Athena.

According to some mythological stories, she was born from the head of the god Zeus.

According to some other myths, the goddess Athena killed her friend Pallas, and afterwards took her name grieving for her lost friend.

Asteroids, although not commonly used in the interpretation of the natal birth chart, can have a very important impact on our personalities and our overall life circumstances. In general, they represent some female archetypes and the feminine power a person possesses.

In astrology, the asteroid Pallas often represents our creative intellect and our efforts. It indicates our intelligence, wisdom, and healing powers.

Pallas indicates how we control and manage our animalistic and aggressive tendencies using our intelligence and wisdom. Pallas indicates our desire to fight for what we believe is right and is focused on the greater good rather than on her.

She symbolizes our relationships with our father (especially for women, father – daughter relationships) as well as the men in our lives.

Pallas might influence some bias beliefs towards men. She either can make us instinctively trust them or, contrary, doubt their motives. Pallas is often attributed some super-powers.

Like the goddess she got her name from, she is considered the warrior queen. She needs to discover the truth before she can make a decision and take action. Pallas is defensive and she will use her wit to avoid violence if possible.

Pallas indicates a person’s intuitive abilities, intelligence, and perception. This asteroid indicates our talent for strategic planning and accomplishing our goals. She is prominent in the natal charts of people who have some creative profession and visual arts, such as photography, movies, design, painting, pottery, etc.

The asteroid Pallas also rules healing abilities and mental techniques of self-healing, such as visualization, meditation, mind control, affirmation, and hypnosis. If prominently positioned, it might indicate the person’s healing abilities or receptivity to such ways of healing.

In some cases, prominently positioned Pallas in a person’s natal chart can give a great talent for diplomacy and politics.

If Pallas has bad aspects, it might indicate a lack of diplomatic skills, weak character, aggressiveness, and similar traits.

In some cases, Pallas’s influence might cause a woman to be very competitive and aggressive, thus limiting her feminine qualities, and cause a man to become overly passive and dependent, acquiring too much feminine qualities.

In the natal chart of a person, Pallas describes the manners we confront with our issues regarding our creativity, skills, politics, healing, relationships, as well as fear of success.

Men with Pallas in Aquarius are often very intelligent and their intelligence is usually focused towards creating something beneficial for large numbers of people.

These men use their energy to help humanity in some way.

They are full of creative ideas to help and improve life for people.

These men are true humanitarians, and usually very different than average people.

Their mind is focused on the future of the world and they are occupied with finding ways to make it a better place.

They often have some healing powers and are good at using their personal energy and knowledge to help people heal.

Women with Pallas in Aquarius have similar traits to men with this placement of Pallas.

These women are focused on the wellbeing of humans, and often fiercely fight to protect the rights of minorities or people whose rights have for some reason been denied.

These women can even exhibit aggressive behavior while pursuing these goals.

Many of these women are artistically gifted and involved in different forms of artistic expression.

Their artworks are unusual and unique and usually something not yet seen.

These women (and men with this placement) set the trends for the future and are admired and respected for that.

Some of the bad traits of Pallas in Aquarius are: overly aggressive, intolerant when fighting for their beliefs, etc.

In the sign of Aquarius, Pallas creates a person with an ability to “see” the future.

It symbolizes a futuristic perception. A person with this placement of Pallas often has healing powers and is able to heal people using sound, vibrations, colors, crystals, and light.

These people express their artistic and aesthetic abilities by creating something new and unique.

They are often the predecessors of things to come. They are revolutionaries who fight for the rights of humanity and those oppressed.

These people are often actively involved in some humanitarian institution actively working on accomplishing some global cause.

They are leaders of protests which fight for the improvement of conditions in our society.

Pallas in Aquarius people use their wisdom and intelligence to create things which will benefit the future generations.

People born with Pallas in Aquarius are focused on actively participating in creating a better future for everyone.

These people are very intelligent and creative, and use these traits to create and invent things that will be beneficial for a huge number of people.

They can often have an aggressive approach when fighting to protect the rights of some social groups.

They are often involved in some global humanitarian organizations or other humanitarian groups where they devote their lives to helping minority groups and fighting for other causes.

These people often have special gifts and abilities, and often have an ability to heal others using different “alternative” methods, such as healing with sound, vibration, visualizations, hypnoses, meditation, etc.