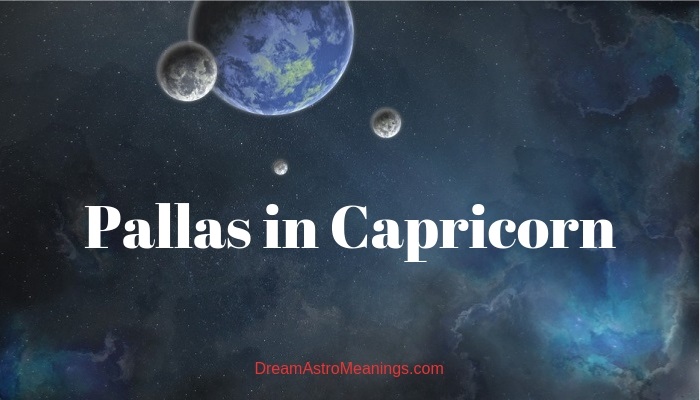 Pallas is the asteroid discovered after Ceres, and is one of the biggest asteroids in the Solar system with a mass third in size of all existing asteroids. It was discovered in 1802. Like all the asteroids, Pallas was first considered a planet. The surface of Pallas is mostly composed of silicates.

The name Pallas came from the name of the ancient Greek goddess Athena. Athena’s alternate name was Pallas. Pallas was her friend, whom she loved very much.

Unfortunately, in a strange set of circumstances, Athena killed Pallas, and begun using her name as a sign of grief for her lost friend.

Although not often used while interpreting natal charts, asteroids can be very useful in giving additional information about a person’s character and life circumstances. Asteroids in astrology symbolize the feminine power of a person.

In an astrological sense, Pallas symbolizes our ability to creatively express our intellect as well as our creative efforts. This asteroid indicates our wisdom and intelligence, as well as the potential for healing others.

Pallas reveals our capacity to control and manage our aggressive and animalistic urges, by using our wisdom and intelligence.

Pallas symbolizes our desire to fight for our beliefs and our focus on the good of all people, instead of the good of one person. Pallas represents our relationship with our father. It usually describes the relationship between a daughter and her father.

It also symbolizes the men in our lives and our relationships with them.

This asteroid accentuates our relationships with men, in a way that it either makes us trusting them instinctively, or making us doubting their intentions and motives.

Pallas is considered a warrior queen. Pallas fights for what she believes is right. She needs to gather all the details before making a decision. Pallas ruled person usually tries to avoid violence and aggressive behavior if possible and use her wit to get what she wants.

The asteroid Pallas often indicates the intuitive abilities of a person, their perception and intelligence.

It also indicates a person’s ability for making strategic plans for accomplishing our goals.

Pallas is the ruler of arts, and it often has a prominent place in the natal charts of people who are artistically gifted or who are in some creative profession. These people are often into some form or visual arts, like the movies, design, photography, sewing, painting, pottery, sculpting, etc.

This asteroid also gives healing abilities to a person. Pallas rules different methods of healing using the power of their mind, or some other techniques, in the process of self-healing and healing others.

For some people, a prominent Pallas indicates good diplomatic skills and talent for diplomacy and politics. With bad aspects of Pallas the person is usually lacking diplomatic skills, has a weak character, or is aggressive.

Pallas’s influence might cause a man to become weak and exhibit feminine qualities, such as passivity and dependency.

On the other hand, strong Pallas might cause women to deny her feminine qualities and to intentionally exhibit her masculine tendencies, and become overly aggressive, dominant, and competitive especially in a man’s world.

In the natal chart, Pallas indicates how we deal with the issues regarding our creative abilities, our diplomatic skills, healing abilities, our relationship issues, and especially how we confront our fear of success.

Men with Pallas in Capricorn are very organized and have an eye or details.

They tend to keep things under control and want always to be in charge of things.

These men strive towards a position of authority and usually manage to acquire such a position.

In some cases, these men are gifted with healing abilities, and choose a profession related to healing.

If they choose to practice some art, they often choose to creatively express themselves in some visual form, such as sculpture.

These men are talented designers and architects and often choose these professions.

Women with Pallas in Capricorn are very responsible and focused on getting things in order, in their private as well as in their professional life.

These women are usually self-aware and confident and don’t like to be told what to do.

They often have a domineering personality which doesn’t tolerate any kind of influence on the side. They often end up in a position of authority which is something they prefer.

They are fighters for people’s rights and propagators of law and order in all realms of life.

They can be even aggressive while pursuing their goals, especially if they have anything to do with the rule of law.

They can be very creative and have a talent for design and decorating.

Some of the bad traits of Pallas in Capricorn: overly aggressive in pursuing their goals, domineering, etc.

People with Pallas in Capricorn are very structured and have a sharp perception of things.

These people are organized but also have an ability to be at exactly the right time at the right place. They love order and they try to establish it in all areas of their life.

These people have a strong sense of form and are talented sculptors, architects, design, etc.

If this person is involved in politics, they are usually fighters and advocates of law and order.

They love authority and are strongly motivated to acquire a position of authority, especially in social and political institutions.

People with Pallas in Capricorn are strong and confident individuals.

They are fighters for legal and other human rights. They are talented healers, and very organized people, who tend to establish order in all areas of their lives.