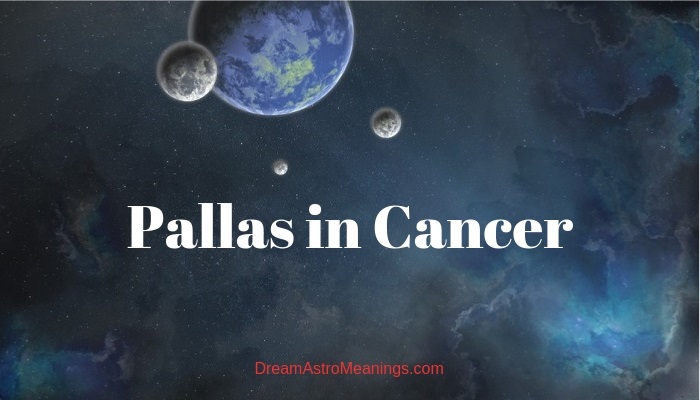 Pallas is an asteroid of great importance in analyzing personal horoscopes and birth charts. It carries the name of Pallas Athens, the famed Greek goddess of wisdom, knowledge, of creative intelligence, healing and protection of people, of justice and virtue.

Pallas Athens was a goddess of many things; Ancient Greeks paid great respect to her and considered her the patroness of the people, of society and of Athenian state.

There are numerous legends about this deity and the most popular one is about Athens’ birth. You have probably heard about it; it is the legend according to which Athens was born from her father’s head.

Her father was no one other than the mighty Zeus, the supreme god of the Olympian pantheon (Jupiter, in Roman version). The myth of her birth explains many things that come to happen in ancient society.

It also has to do with archetypical meanings reflected in astrological asteroid Pallas and in individual birth charts. The birth of Athens symbolically represents the need of a female child to establish the connection with the authority of the father.

They myth is complex, but we could see it as about a daughter without a mother to give her birth.

Even Pallas Athens says so in the myth of the Orestes, the hero who slaughtered his own mother to avenge his father murdered by her. Athens Pallas supported the hero and saved his life.

Pallas Athens is also a great strategist, the warrior-goddess, but not aggressive and of raw strength as Ares. She even managed to outsmart the courageous fierce Ares through tactics and by using her wisdom. Her weapons are wisdom and intellect, not force.

This noble deity stands for justice and always defends those whose rights are harassed, restricted, those who suffer unjust treatment of the authoritative figures.

She defends the helpless and heals the wounded. It is interesting to note that, according to Greek mythology, Pallas Athens was the teacher of the first notable healer, Asclepius, known as the deity of medicine.

From all we have learned about Pallas Athens (and there are, no doubt, many more things you could search for regarding her qualities and abilities), it seems astrological Pallas could be very important in interpretations of personal horoscopes. Indeed, it is so.

Pallas in an asteroid, discovered after Ceres, located in the asteroid belt between mars and Jupiter.

In astrological sense, Pallas represents some rather important features of each personality. It is about our attitude towards the authority, primarily fatherly figure and especially about establishing connections between the worlds of women with that of men.

In modern terms, it could be essential in understanding one’s attitude towards gender roles and personal rights.

Pallas in general sense represents politics, society and all issues related to these. It is the principle of creative, practical intelligence. Pallas is related to solving problems and our ability to do so.

The place Pallas holds in one’s birth chart describes the channel we use to express our creative potentials, as well as our manner of solving problems.

It also represents one’s ability to heal and learn. Pallas stands for our perception of knowledge, of its importance, one’s need to succeed, but also the fear of success, that often comes along, no matter how strange it sounds.

Pallas also describes the way we thing in an original, unique manner. The house and the sign it dwells represent the field of life in which our creative potential will flourish and the way it is going to happen.

Pallas, just like other astrological heavenly bides, could create difficult aspects with other planets. If it happens, it could be that your creative potentials get restricted, blocked.

It also stands for healing potentials, attitude towards authority and everything else that Pallas offers and that should be processed. It greatly depends on your personalized natal chart, because there are no ideal versions of any astrological planet in an individual horoscope.

Pallas in Cancer – The wisdom of empathy

Pallas in Cancer or in the fourth house expresses its creative potential through home and family.

People with Pallas in Cancer are occupied with arranging their own home, making it cozy and comfortable.

They do everything to make their family feel safe. Their greatest potentials are fueled by family atmosphere.

These people are emotional, sensitive, but also highly intuitive. Pallas supports one’s intuition and with Pallas in Cancer, it is very strong.

These people solve problems mostly by using their intuition. They experience the world through strong emotions, particularly those that bind them to something.

In politics, Pallas Cancers are always great patriots, guardians of the heritage and their own lands.They care for old, helpless, poor ones and would always support the cause of helping them.

Pallas Cancers are guardians of history and cultural heritage.

They sympathize with people who have lost their home or homeland. They could be publically active in supporting causes meant to restore heritage, save lives, help damaged, especially children.

Their empathy and intuition are greatest qualities of their being.

The wisdom of Pallas Cancers lies in compassion and empathy. These people are great pacifist, very humanitarian and specific protective attitude they have towards helpless.

Pallas Cancers are kind and noble people, with incredible emotional healing capacity. They could become amazing therapists; they listen to people and sympathize with their problems.

They literally see and experience the world through emotions. They feel for others and could offer great emotional support. They boldly stand for those who need help, in political and social sense.

They are humanitarians by nature and it is important to note that they extremely care for children welfare causes.

These are benevolent people, with great hearts. Their wisdom is their emotional self and Pallas makes them channel emotions in good direction, by supporting their intuitive being. Pallas Cancers do right to listen to their intuition, in majority of situations.

It guides them through life and helps them achieve great things.