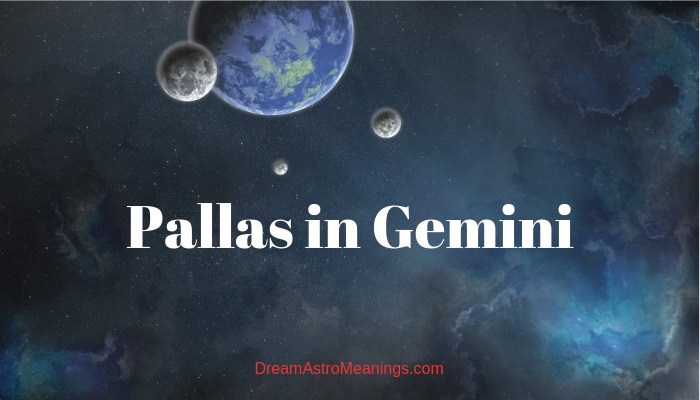 Pallas is the second discovered asteroid from the asteroid belt between Jupiter and mars. It was named after the Greek goddess Pallas Athens, the deity of wisdom and intelligence, the warrior goddess, the healer and the strategist.

The goddess Pallas was much worshiped in Ancient Greece and praised for many things.

She was also the deity of art, crafts, science, learning, creative intelligence in general. Pallas Athens was considered the patroness of the Athenian states and the society.

In Roman mythology, she was Minerva, the goddess that taught women to weave and yarn wool and men to build ships, war carriages and all sorts of other crafts. There are many legends regarding Athens, but the one all probably know is the myth of her origin. According to the legend, Athens was born not from a mother, but from her father Zeus’ head.

The legend is more complex than the line we all know; the goddess of wisdom Metis, the god’s first wife, conceived a child with Zeus.

In fear of the prophecy that said Zeus will have two children of which one will be loyal and the other will defeat them, the god turned Metis into a fly and swallowed it. Metis has traveled to Zeus’ head and there started to forge armor and a helmet for her unborn daughter.

The pain Zeus felt from it was so great that he ordered Hephaestus to open up his head! From his head, Pallas Athens, the armed goddess, the virgin goddess of wisdom and war was born.

Many legends tell about Pallas Athens as the patroness of the Athenian folk and the states of Athens. She has given the people of Athens the olive tree, from which they could take fruits, produce oils and the wood for heating.

The warrior goddess’s cult was popular not only in Athens, but also in the lands of the brave warriors, in Sparta. Although Pallas Athens was not considered an aggressive warrior deity, but the one that rules by justice and wisdom, she was the great defender of people who worshiped her at times of war.

Brave and wise Athens even succeeded in outsmarting Ares, the god of war, by using tactics and intelligence rather than raw force.

Pallas Athens was the virgin goddess, the one who never accepted to be controlled by any man, in any sense. She never got married and she had no children of her own. This makes her the opposite principle of that of Demeter (Ceres in Roman version and in astrology), the goddess-mother.

Pallas Athens embodies the idea of a strong, independent woman in the world of men.

Pallas is an asteroid, located between Jupiter and mars, discovered after Ceres.

Astrologically, Pallas represents one’s creative intelligence and wisdom. It represents divine power, embodied in the figure of the goddess Pallas Athens, after whom the asteroid was named.

Astrological Pallas represents one’s ability to find the balance between intuition and logic, because both are strong with the principle of Pallas. It is also about science, pragmatism, intellect and intuition as it is. Pallas represents our attitude towards matters of state, society and politics as well.

It carries the healing attribute of the goddess Athens, meaning it represents sources in life we use to heal ourselves and others. Pallas has to do with our attitude towards competition, success and the fear of success.

Since Pallas Athens is also the goddess that supports art, Pallas in one’s natal chart represents our artistic and creative abilities.

However, they are, in case of Pallas, always colored by logic and reason.

Pallas creates things that are useful and practical. We could easily say there is nothing abstract with Pallas, only logical, practical, useful and applicable.

The goddess Pallas is a patron of all crafts and artisans.

Pallas in Gemini – The strength of communication

Pallas in Gemini or in the third house gives one the ability to use their creative potentials in communication.

People with Pallas in Gemini spread information and knowledge and solve problems in matters of seconds. Their greatest creative potentials are channeled through the ability to use words and speech; they could be writers, journalists and performers.

They could also be excellent teachers, scientist and mentors, because they are efficient in passing knowledge to other people.

Gemini Pallas can raise awareness about important matters within the society, primarily thanks to their excellent communication skills. They could be reformers and intellectual revolutionaries.

Since Pallas describes one’s political nature, in Gemini it creates people who are amazing in rhetoric. They could be amazing in any sort of a public debate.

When it comes to healing aspect of Pallas, Pallas in Gemini makes one capable of using positive affirmation techniques to heal. These people can literally heal though communication channel, by using words and reason.

For example, they could be great psychotherapists and they could usually help themselves heal through repeating positive thoughts, words and else.

Pallas Gemini are practical, mobile and adventurous. Their creative intelligence is easily applicable in everyday matters.

They do not wait for the problem to get solved by itself, but they act to cut it down in the beginnings. They would always find something to be solved; otherwise, they get easily bored.

These people are capable of multitasking and very efficient at it.

Pallas in Gemini people are those whose primary channel of creative intelligence are words.

They see the world in words and use words in a very efficient manner. They believe things should be said aloud and in a tactful manner.

Depending on other aspects in one’s natal chart, their need to express themselves through words could be tricky; sometimes they are hasty, but usually Pallas makes them good communication strategists.

Pallas Gemini people are great at solving puzzles and at simultaneously doing more things at the same time. The type of intelligence they have is sharp, quick, easily applicable.

They do not need to think for long to come up with a good solution. They are excellent in preventing problems and they would always settle things down with clever arguments.