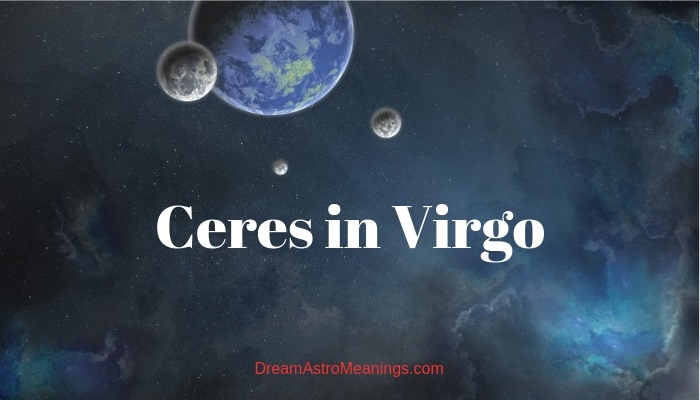 The smallest of dwarf planets and the largest of the bodies in the asteroid belt, planetoid Ceres was discovered in 1801, on the first day of the New Year.

This asteroid is big enough so that its own gravity force shaped it as a sphere, which is an interesting astronomical fact about this planetoid.

Ceres got its name from the ancient deity of agriculture, vegetation, fertility, nurture and crops, the Roman goddess Ceres, which is also the equivalent to Greek Demeter.

Ceres or Demeter is the archetypical mother; the origin of fertility deities is much older than the classical period. Ceres embodies this archetype of the Supreme Mother and the Mother Earth, as well.

It is one of the major Roman deities and her importance was great at the time. There is a myth about Ceres most of people know about. Astrological meaning of Ceres is closely related to the meaning of the myth.

It is the story about Ceres, Proserpine and Pluto (Demeter, Persephone and Hades, in Greek mythology). Ceres was the goddess of agriculture, fertility and crops, meaning she possessed powers essential for all life on earth, which was the reason people greatly worshipped Ceres.

Crain is the symbol closely related to the goddess Ceres and the symbol of food, abundance and, thus, growth and life.

The myth tells about Pluto abducting Proserpine and raping her. He was obsessed with her and wanted Proserpine to be his wife and his queen. After he abducted Proserpine, angry and sad Ceres, devastated by her own rage and grief, took away all her blessings to the earth, leaving lands barren, dry, without life. She searched for her daughter desperately and care of nothing else.

Finally, Jupiter (Zeus) decides the situation has to be resolved. He made Pluto and Ceres come to a compromise solution.

For three months, Proserpine should remain by her new husband and rule as the queen of the underworld. For other months, she would be allowed to return to her mother.

These periods of Proserpine’s absence and return on the ground correspond with seasonal changes.

In astrology, Ceres plays an important role in analyses of individual’s birth charts.

As an archetypical mother, Ceres embodies ideas of unconditional love and devotion, self-sacrifice, sacrifice as it is, nurture, care and one’s ability to accept and process loss.

Ceres decides upon the way parents are likely to deal with the separation from their children, which is a natural and an inevitable process.

Ceres does represent a maternal ‘effect’, to say so. The need to care for someone, to please and nurture them, it comes from Ceres’ effect in a birth chart.

Depending on its position, we show affection and care the way we do.

Dominant Ceres is often expressed as a possessive guardian. However, Ceres is generally seen as a favorable element in a birth chart.

The astrological nature of Ceres is the closest to that of the Moon.

While the Moon is closely related to our emotional self, our need for security and safety, our home and relationship in general, Ceres embodies our inborn need to care for other people and to be cared for by others.

The place Ceres occupies in our natal chart represents our way of caring, our expectations of care and the place filled in with caring nature in our life.

Ceres is also an important element that affects our self-respect and the way we see ourselves. It is greatly affected by the way we feel about other people and their emotions.

Ceres also affect our self-criticism and our critical attitude towards others, because it is an inevitable part of the concept of care. Aspects Ceres creates with other planets or asteroids indicate connection between our caring nature and our personality traits.

Ceres in Virgo indicates a personality that is fully oriented towards details and criticism. The way people with Ceres in Virgo care about others could appear cold and insensitive.

In fact, others often feel as if they are attacked, mentally, not cared for by a Ceres Virgo. It is because they try to help people improve themselves through criticizing everything they do.

Although Ceres Virgo offer valuable and constructive critic, this could be too sharp and cold to more emotionally fragile individuals.

They also improve themselves through criticism received from others. They would endlessly argue about details, but they would use the best of it. They feel as if they cared for, only if a person pays attention to every detail of their work or else.

Virgo Ceres ones have to be occupied. If you have a child with Ceres in Virgo, the best way to show it you care is to give it something to work on, to engage its mind, skills and talents.

Support their passions and do not restrict their need to make things perfect. Virgo Ceres show their affection by supporting others’ work and encouraging them always to give the best of themselves.

They could teach you organization, tactics and persistence. Virgo Ceres do not as if others simply tell them they did something good; they will never be satisfied with it.

Give them detailed analysis. They would do the same for you. They like things that are precise, fitting, simple. Quality food, clothing and healthy activities are something they feel nurtured by.

Ceres Virgo are highly disciplined, so they often appear strict and reserved in the eyes of others. Their nurturing nature is not cuddly and warm and it is sometimes hard to identify as nurturing.

They could be strict parents, but the only thing they truly desire is to make their young ones people who will be proud of who they are and of what they have achieved in life.

Virgo Ceres people are workaholic ones and they find the greatest satisfaction in work and in trying to reach perfection.

Their caring energy expresses through supporting others’ work and offering detailed, constructive critics.

They are not very well in emotional nurturing, but their practical advices are priceless. They would always encourage others to work systematically, to take care of their health and body.

Virgo is associated with perfectionism and with extreme care for physical fitness, cleanliness and health.

They would always inspire these ideas in others. They would show they care for you by giving you good advices about healthy eating and activities. They are open for the same thing.

Virgo Ceres could teach you self-respect, self-discipline, organization and responsibility.