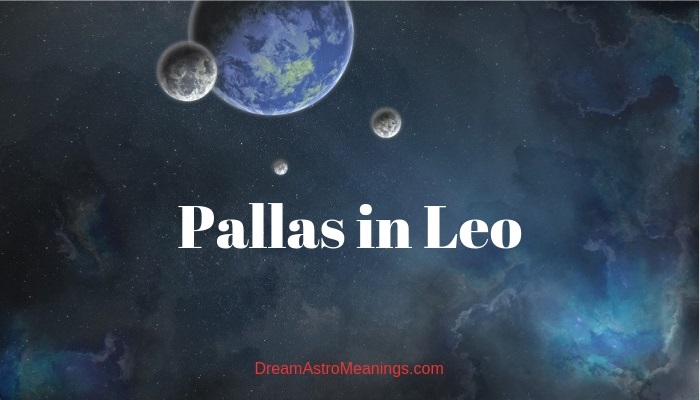 Asteroid Pallas is one the commonly less known elements of horoscope, but one of great importance in detailed analyses of birth charts. Its name comes from one of the greatest deities of the Ancient Greece, Pallas Athens, the goddess of wisdom, art, healing and intellect.

According to the legend, Pallas Athens was born from her father’s head and he was no one else than the almighty ruler of the Olympian pantheon, the god Zeus.

Legends about Pallas Athens are many, because this goddess was widely worshiped in Ancient Greece.

She was the patron of people of Athens and of all its lands, but other city-states of Greece adored her. She was popular in Sparta, known as warrior goddess. However, Pallas Athens is primarily considered a wise strategist and a just warrior. She even outsmarted Ares, the god of war, by using tactics and wisdom, not raw force.

Pallas Athens represents the ideal of a strong woman in the world ruled by men. Although she was never accepted as an equal to men, Pallas Athens was the figure to be greatly respected by men, even followed.

She embodies the ideal of a sister, a colleague and sometimes even a leader. The myth of her birth tells about the very strong masculine principle through which she expressed her qualities.

Even the goddess once said that the truthful parent of a child is a father. This myth is allegory to many things; amongst the others, it symbolizes the transition from the world of matriarchal order to that of the men dominance.

Pallas Athens, however, wants to be equal in this world; she is not the ideal of the Supreme caring mother, such as Demeter (Ceres).

It is interesting to note that this archetype of Pallas Athens has becoming all-present and visible in modern society. Women that pursue career over family, influential women of authority, they all carry the quality of Pallas Athens.

Moreover, this is the matter of the global society; only one of the aspects you could identify Pallas Athens with.

She was also the goddess of healing and of crafts. According to mythology, she gave people the olive tree, so that they can produce oil and wood for heating. She also taught Asclepius, the god of medicine, the art of healing and regeneration.

Pallas Athens taught women to yarn wood and to weave and men to build ships and vehicles and other things.

In astrology, Pallas is associated with our sense of the society and politics, our attitude towards authorities, our way of dealing with problems in life. Pallas represents one’s perception of the world through knowledge; it represents our creativity, inventiveness and practical intelligence.

Pallas also stands for intuition and supports it. It also helps create balance between reason and intuition.

Pallas in a birth chart determines our way of healing and recovery, since Pallas Athens was the goddess of healing, amongst other things. Pallas always supports creative thinking and practical creativity.

The place of Pallas in a natal chart represents the area of life in which your creative potentials will express to the fullest.

It is always important to take into consideration aspects that Pallas creates with other elements, because they also determine the way Pallas’ qualities are going to develop in one’s personal horoscope.

Pallas represents the way we use our logic and reason and how do we combine them with intuition. There is not much of abstract thinking with Pallas, but practical and efficient. Pallas also helps us organize and reorganize things in life.

Pallas in Leo – The power of creativity

Leo is a particularly favorable position for creatively intelligent asteroid Pallas. Leo itself promotes qualities of creativity, so this is a good combination. The fifth house or the sign of Leo are good for developing strategic way of thinking, as well.

Pallas in Leo people have incredibly sophisticated taste in aesthetics and they are themselves creators of beautiful, astonishing pieces of art.

These people are extremely talented and creative and they have a strong need to express these talents and share them with the world.

Pallas Leo people experience the world through their own creativity; they see the world as a place they have to leave their mark on and it fills them with great joy. The world is like a canvas to be painted.

Their vision of the world is what they would paint and they want others to see it. Therefore, Pallas Leos could be amazing, inspirational and charismatic leaders.

They are the ones to lead the society into the better tomorrow, as seen in their vision. They are brave and noble; their intentions are pure, if aspects are in favor.

Everything Pallas Leos do has to drive attention. They often choose dramatic solutions to problems, even if it is not necessary. Sometimes they are just being pompous.

This is only the manner of manifestation their problem dealing abilities; in fact, they are determined and very efficient in it.

Making drama is also one of the channels Pallas Leos express their creative potentials through.

Pallas in Leo represents great talents for many things. People with Pallas in Leo have creative potentials primarily for art, but also for politics and sports.

They usually reach some level of recognizable social position; they love public and feel comfortable if in center of attention. They have creative perception of everything, so they could be amazing artists, performers, and sportspersons.

We could say Pallas Leo are ones that are most likely to become true public stars.

They could become influential politicians as well. They often have their own ideas and visions on how the world should look like and they use their own potentials to make it see the light of the day. They are very proud of themselves and courageous.

Pallas in Leo indicates a personality that heals through creativity.

They heal themselves through practicing something creative; dance, painting, singing or else. They could also help others heal the same way. They could be successful in art and music therapy, for example. They support creative potentials in other people, although they do tend to be competitive.