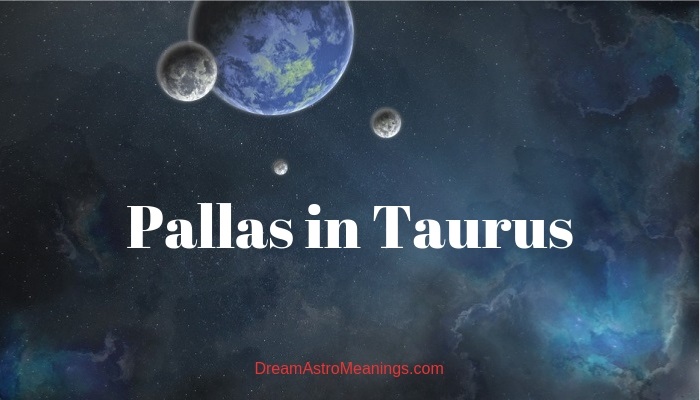 Pallas is an asteroid that carries principles of Athena, Pallas Athena, the warrior-goddess.

We could see Pallas as the opposite of female deities that embody the idea of mother and motherly instinct. Pallas Athens had no mother; she was born from her father’s Zeus head.

According to Homer, Pallas Athens was the favorite Zeus’ child. She is associated with intelligence and that of a pragmatic sort. Her intelligence is holistic and inventive. It is interesting to note that Pallas Athens carries both feminine and masculine principles.

She represents the independent woman, the one that refused to get married and be ruled by men and yet, the one whose direct origin is solely a man.

In the myth of Orestes, the hero who murdered his own mother to avenge the father whom she killed before, Pallas Athens stood up for the hero. She defended the one who has already accepted the possibility that he is going to die for what he has done, for the slaughter of a mother is definitely a disastrous crime.

Furies, mythical creatures chased down the hero, in the name of the vengeance for his matricide.

Orestes was put on a trial; he did not deny his crime. The deciding question was whether a mother should be honored over the father? Which of the crimes was ‘greater’? Which one should be avenged?

The results of the divine jury were equated and Athens so decided in Orestes favor. In a way, it was a deed of justice. Pallas Athens is also considered a deity of justice.

The myth is an allegory, needed at that time, so that it helps in transition from an old matriarchal order to the new, patriarchal society. Athens even said that the father was the truthful parent of a child.

Remember, Pallas Athens had no mother. In bad light, Athens could even be seen as a cruel and insensitive figure, ready to sell herself to forces mightier than she is. She represents a strong feminine figure, in the world of men.

In astrological terms, Pallas, the asteroid named after the goddess Athens represents politics and social questions. She represents practical intelligence and logic.

She is indeed a warrior-woman, a new model of a woman who can survive in the tough world ruled by men. She is the opposite of the nurturing figure of the Supreme Mother, such as Demeter, for example.

Pallas rules over the relation between a daughter and a father. The position of Pallas in astrological charts tells about the understanding of modern issues related to gender rights, the importance of male children, problems related to physical harassment in working environment in very sensitive and intimate terms.

Pallas in astrological sense has to do with all relations in which any sort of imbalance is present; Pallas stands for liberation of women from the rule of men.

Pallas represents the fight for female independence and transformation from a solely a motherly figure to an active, self-reliant woman.

In one’s natal chart, Pallas describes the one’s attitude towards mentorship, art, politics, competition and the fear of success. It is related to your creative intelligence and original thinking.

The place it holds in your birth chart is the one in which your intellectual and creative potentials will flourish.

Pallas in Taurus or in the second house expresses its creative intelligence through talents that are practically applicable in everyday life. Since Taurus is greatly a materialistic sign, Pallas in Taurus is oriented towards learning how to gain material fortune.

People with Pallas in Taurus are very materially oriented and they are given talents easily to earn material fortune.

Pallas, as the principle of wisdom, intelligence and one’s sense of social justice, social questions, politics and authority, manifests practically. People with Pallas in Taurus have no problem with patience and they are calm, tough and ready to work systematically.

They would keep their heads cool and slowly come up to a solution. They do not make hasty and foolish decisions.

Everything they do has to do with senses. Taurus is a sensing, material and physical sign. Pallas Taurus people create things with their own hands. On a wider plan, they could take the role of a public figure that has to do with agriculture.

For example, a Pallas Taurus could be a politician whose occupation are agricultural questions. They care about land, ecology and crops.

Pallas Taurus stand in the name of artisans and artists.

Pallas Taurus people absorb information from the world around through their senses. Touch of something, the smell, the sound; they are not abstract thinkers, but physical, materialistic, tactile and sensing.

Pallas Taurus would always do great things for environment. They care about lands and their inventive minds could come up to fantastic solution in these terms.

They possess great talents of transforming the information they receive through anything they made themselves, such as a song, a piece of art or else. Their skills are practical; they would usually make something that is not only beautiful, but also of some use.

It is also important to note Pallas Taurus people are patient and capable of sticking to their plans and goals.

Taurus Pallas are people ruled by their common sense. In matters of social questions, politics and justice, they search for practical solution.

They are not likely to be leaders, but nurturers. They would always see to find a solution that is the best for the environment and the physical aspect of the world they live in. They stand for pragmatic, comfortable solutions and are talented in maintaining satisfying financial situation.