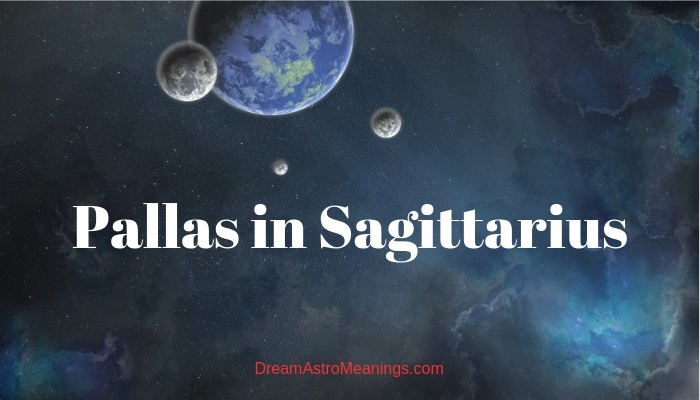 Its name’s origin comes from the name of the ancient Greek goddess of war and wisdom, Athena. She was the daughter of Zeus, the supreme god in the ancient Greek pantheon, and had a strong relationship with her father.

The name Pallas was the name she adopted as a sign of respect and grief after she accidentally killed her very good friend Pallas. After that incident, Athena began using the name Pallas alongside the name Athena.

In astrology, the asteroids symbolize our feminine power in general. These astronomical bodies are not often used in the interpretations of natal charts, but they should because they can give us a lot of insight and details about a person’s character, abilities and preferences.

The asteroid Pallas describes how creative we are as well as how smart we are. Pallas indicates our creative efforts and achievements, our wisdom and intelligence, as well as the healing powers we possess.

Pallas indicates our ability to control our aggressiveness and animal tendencies, with our reason and our intelligence. It indicates the will we possess to fight for what we believe in and our focus on other people’s needs and wellbeing.

This asteroid indicates how compassionate we are.

The asteroid Pallas is called the “warrior queen”. Pallas fights for the rights of the oppressed and fights for her beliefs. She uses her intelligence and wit to avoid arguments and conflicts and still manage to fulfill her desires and accomplish her goals.

Pallas is also considered a healer asteroid. It indicates whether the person has intuitive abilities or healing powers, and how strong are they. Pallas rules different healing methods, mostly the ones where the power of mind and will is used in the process of self-healing or healing others.

These methods of healing could be meditation, sound or light healing, mind control healing, hypnosis, affirmations, aura reading, visualizations, etc. People who have a prominent Pallas in their natal charts are often susceptible to such methods of healing.

The asteroid Pallas demonstrates a person’s ability to strategize and take the right actions to succeed in their goals. Pallas in good aspects with other planets often gives a person talent for diplomacy and politics, as well as good diplomatic skills.

If the aspects Pallas is making are bad, the person usually lacks these skills. Bad aspects could also make a person aggressive or weak.

Especially men who are strongly influenced by Pallas might be prone to exhibit feminine qualities and act dependent and passive.

On the other hand, women with strong Pallas in their charts could become very aggressive and exhibit dominant and competitive behavior, especially with men. These women might consciously or subconsciously deny their feminine traits.

These people are into creating visual art forms, such as painting, pottery, sculpting, etc.

Men with Pallas in Sagittarius are usually very spiritual and have great spiritual knowledge.

These people often have healing abilities or they use their spiritual knowledge to help and heal others.

They often use mental images of the desired outcome to help a person heal.

They have the ability to put the parts of the puzzle into a whole piece and that enables them to succeed in any chosen area.

Women with Pallas in Sagittarius like men with this placement often have great spiritual knowledge and abilities.

They are well acquainted with the process of mental healing, using mental images of the desired result to help induce the desired state in their patients.

They are fighters for the rights of the oppressed and often have an ideology for which they advocate.

People with Pallas in Sagittarius are very spiritual, have healing abilities, have a gift to imagine the whole picture when they only have the parts, have unifying qualities, etc.

People with Pallas in Sagittarius are talented to see the bigger picture of things, but they sometimes miss the details which are very important as well.

People with Pallas in Sagittarius usually have the capacity to see the bigger picture of things.

These people use mental methods of healing, usually using clear mental images of a perfectly healthy body so that by analogy the same thing could happen in reality.

These people often use their spiritual knowledge and powers to heal people.

When these people are involved in politics or similar activities, they are usually fighters for justice and truth, or defending some ideology.

They can be excellent advisors to the rich and powerful. They have a gift of unifying parts into a whole.

Their ability to see the whole picture of matters helps them achieve success.

People with Pallas in Sagittarius have a gift of seeing the bigger picture of things and not just focusing on the details.

They are usually very spiritual and use their spiritual knowledge and powers to help and heal others.

They usually use methods of mental healing.

They are fighters for the rights of the oppressed or defenders of their chosen ideologies.