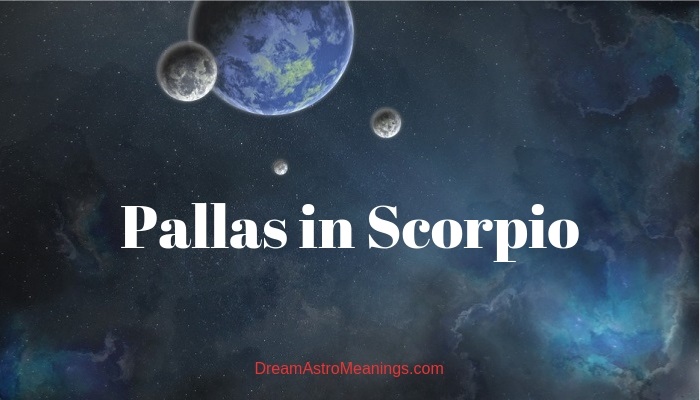 The asteroid Pallas is the second discovered asteroid. Its discovery happened in 1802. This is one of the biggest one in the Solar system.

Like the others first discovered asteroids, Pallas was also considered a planet at first.

Asteroids are a very useful tool in astrology to help us describe in more detail the person’s character and their abilities. In general, asteroids symbolize a person’s feminine power.

The asteroid Pallas indicates how creative and intellectual we are. It symbolizes our creative efforts. It also indicates or wisdom and intelligence. Pallas is also the healing asteroid and indicates our healing abilities, providing we have any.

This asteroid in our chart can indicate our ability to control and suppress our aggression and animalistic urges by using our intelligence, wisdom, and our common sense.

Pallas in our natal charts indicates our willpower to stand up for what we believe and our ability to focus on other people’s needs and wellbeing. This asteroid also symbolizes the daughter – father relationship in analogy to the special relationship Athena had with her father Zeus.

This asteroid also symbolizes the men in our life, especially for women. This asteroid’s placement indicates how much we instinctively trust or distrust men.

Pallas is considered the warrior queen who fights for what she believes and fights for righteousness and justice. She makes her moves and decisions carefully, and she thinks well before taking action.

Pallas focuses on avoiding conflicts whenever it’s possible and resolving matters with peaceful matters, and she uses her wit and intelligence to accomplish that.

Pallas also indicates a person’s ability to strategize and carefully make plans for achieving their goals.

Pallas indicates a person’s intuitive abilities as well as their healing abilities. This asteroid is the ruler of different healing methods, mostly the ones where the power of the mind is used, or similar techniques for self-healing or for healing others.

Some of these methods are healing through meditation, visualizations, affirmations, sound and light healing techniques, mind control, hypnosis, etc. People who are influenced by the asteroid Pallas can also be predisposed to be healed in such a manner.

The asteroid Pallas is also the ruler of arts and artistic endeavors. This asteroid is often prominent in the charts of creative and artistic people, and those who do some creative work for a living.

People with strong Pallas can also be gifted with diplomatic skills and have a talent for diplomacy and politics. Those with badly aspected Pallas can lack these skills. Bad aspects of Pallas could also make a person weak or aggressive.

Men can exhibit feminine traits, such as weakness and dependability, while women can become overly aggressive and negate their femininity. They might behave dominant and competitive especially in male company.

This asteroid also reveals how we deal with the issues related to Pallas ruled areas, such as our creativity, diplomatic skills, relationship issues, or how we handle fear of success.

Men with Pallas in Scorpio are very perceptive and have a sharp eye for details.

They are often able to see through people’s intentions and it is not easy to lie to them because they have the ability to read people’s minds and see through their lies.

They are often successful psychologists, detectives, spies, and successful healers who use the methods of hypnosis and past life regression to help heal their patients.

These men often have magnetic energy and are able to almost hypnotize people into following their lead.

Women with Pallas in Scorpio have fascinating abilities to see through people’s motives.

These women are very aware of their environment and pick on the vibrations of people. They can spot negativity very easily.

With bad aspects of Pallas, these women can use their magnetic influence on people to manipulate because they instinctively desire to follow these women (and men with this placement as well).

People with Pallas in Scorpio are magnetic, able to read people’s minds, excellent healers, perceptive, have an eye for details, etc.

People with Pallas in Scorpio can be manipulative and use their abilities for bad purposes, as well as be prone to criminal activities.

People with Pallas in Scorpio are very perceptive.

They are usually capable of seeing through things and people and discovering what is beneath the surface. They are able to discover people’s hidden motives.

They are powerful healers, able to get to the core of the problem and resolve it.

They are excellent psychologists who are able to fathom the subconscious reasons for the health issues of a person. These people also use techniques as past life regression and hypnosis in their healing practice.

These people are excellent strategists and have an almost hypnotic influence on the masses.

They are also excellent spies. They get obsessed with finding a solution to problems and don’t give up until they find one. They are also good at helping others manage their finances.

People with Pallas in Scorpio have a deeper understanding of things. They have a strong intuition and sense of inner knowing of things.

No one can hide the truth from these people because they have the ability to look beyond the visible realms.

With bad aspects of Pallas, these people could easily use their extraordinary abilities to manipulate people, or they can be prone to criminal acts.

People with Pallas in Scorpio usually have an extraordinary ability to see beyond the visible realms and look into the unknown to find the truth.

They are very intuitive and have a sense of inner knowing of things. They cannot be fooled by people’s attempts to lie to them because most of them have an ability to read people’s minds.

They are excellent detectives and spies. They have a nose to smell a secret and bring it out on the daylight.

If they are healers, they use some radical methods, such as past life regression and hypnosis.