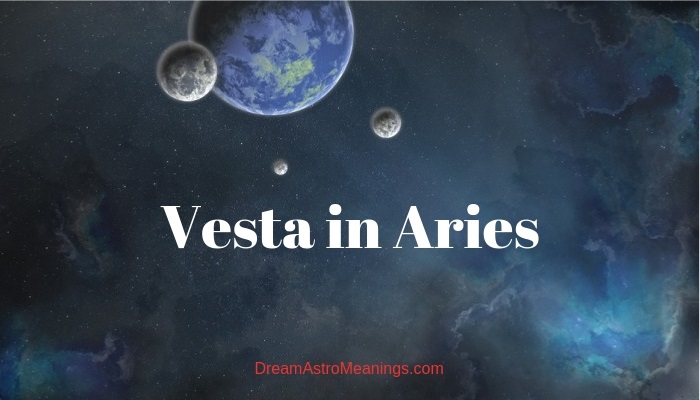 Vesta is the fourth discovered asteroid, after Ceres, Pallas and Juno. It was first discovered in March 1807. It is the second heaviest asteroid, following Ceres.

On its surface are two enormous size craters which were a product of collisions billions of years ago. Parts of this collision have fallen to the surface of the Earth as meteorites. Vesta is the brightest asteroid that can be seen from the Earth.

The name Vesta came from the ancient Roman goddess of home, family, and heart. Vesta was also considered guardian of the Roman people. This goddess was usually represented by the burning fire in her temple which was in the Roman forum. She was rarely presented in human form. Vesta was one of the most admired deities in the Roman gods’ pantheon.

The holiday Vestalia dedicated to Vesta was one of the most important Roman holidays.

No one, but the Vestal virgins, her priestesses were permitted to enter her temple. There were six of them, chosen first by the chief priest of Rome, the Pontifex Maximus, and from the time of the emperor Augustus, the Emperor himself.

The chosen girls aged from six to ten years and needed to consent to be virgins at least 30 years, after which period they were set free from the priesthood.

They took care of the sacred fire in the temple which was supposed to burn without ever being extinguished because the ancient Romans believed that the fire was protecting Rome.

The Vestals who allowed the fire to extinguish were beaten. Vesta was the cleanest of all the gods; she was a virgin and was also addressed as the mother who granted fertility. Vesta’s flames symbolized the vital force of the community and the rituals her virgins performed aimed to ensure good a harvest in agriculture.

Vesta in a certain sign in our chart describes what we need to focus on and remove from our lives. It also indicates the manner we deal with our passion and our physical needs; whether we exhibit it freely or we suppress it.

Vesta indicates our devotion to something or someone, whether it is a cause, a project, some belief we have, a person, etc. It also indicates the areas of our lives where we need to sacrifice something or sacrifice ourselves for the sake of some greater good.

The areas ruled by Vesta are often the ones where you experience issues which you choose not to acknowledge or you keep them private. These areas are usually ones we consider the most important in our lives, and yet we cannot seem to find satisfaction in regards to them.

This asteroid gives you the perseverance to maintain the focus on achieving your goals and overcoming the issues which arise along the way.

Men with Vesta in Aries are usually brave and confident individuals. These men need a lot of space because they are very independent.

They cannot stand anyone telling them what to do and can be very brutal when telling people their opinion about these attempts. They are loners in a way because they usually do all their work by themselves.

They don’t want anyone minding their business.

When they are focused on accomplishing a goal, they don’t care about the obstacles they are encountering. Nothing can discourage them from reaching their goals.

These men can be quite self-centered and focused entirely on themselves.

They can also be very competitive.

They need to make sure not to get overboard with their need for independence because it might distance them way too much from other people and make them feel lonely and isolated.

Women with Vesta in Aries have similar traits to men with this placement.

They could either be very independent and don’t let anyone jeopardize their freedom, or they could be in some life situation where they are forced for some reasons to limit their freedom and put up with that limitation.

These women are very enduring and brave.

They fight bravely the obstacles they encounter on the path to achieve their goals. They can be selfish and self-centered in some cases.

Vesta in Aries people often exaggerate with their need for independence which in turn isolates them from other people. They are also self-centered, competitive, and selfish at times.

People with Vesta in Aries are usually very independent and don’t like anyone influencing them in any way.

They avoid people with dominant characters. They might become self-absorbed and selfish thinking only about their needs.

Their physical needs are strong, but their need for freedom and independence might pose a threat to their relationships and their durability.

When Vesta is placed in Aries, you might be faced with a duty to protect the spirit of adventure, discoveries, creative freedom and independence.

You don’t have a problem facing the challenges you encounter, as well as any competition. You need to be able to express yourself freely, to go where you want, and develop your personal powers.

These people don’t need anyone’s support to succeed. They are capable and independent enough to reach success on their own.

They are self-motivated and they manage to succeed in all their endeavors but usually without the involvement of other people. They have a gift of focusing solely on their work.

They need to establish a balance between their need for independence and often isolation, and maintaining a healthy relationship with others.

These people are usually very courageous and passionate.

People with Vesta in Aries are freedom-loving people.

They cherish their independence and don’t allow it easily to be restricted in any way. They are confident and persevering when it comes to accomplishing their goals.

In some cases they can be self-absorbed and selfish.