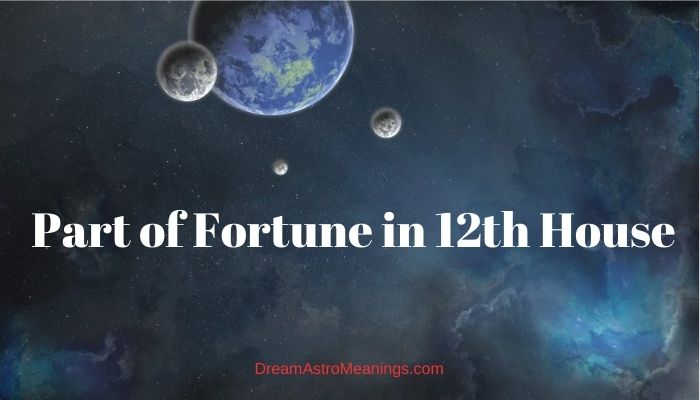 There is hardly a person who has never thought about where to look for the cause of failure, what is the life vocation, how to improve social status and prosperity.

The answers to these burning questions are contained in a personal horoscope. In astrology, there is such a thing as Lots (Points) or Parses.

The Pars (Wheel) of Fortune represents success and lack of problems. Its other name is the Point of Happiness.

Although many astrologers have tried to define this particular point of the horoscope, no published work has yet been able to clearly define the exact meaning of this most important area of ​​the natal chart.

A person who experiences ups and downs, serious trials and misfortunes is supported by a ray of hope, indicating a successful outcome of his fate. When the current circumstances of life are against him, he knows better days are ahead.

On these better days, when a person feels more joy in himself, he can feel that his thoughts, emotions and activities bring him closer to the goal that represents the sincere aspiration of the Soul.

In addition to passing needs, each person has an internal structure of his aspirations.

Thus, the concept of right and wrong for any person is less a product of the morality of the society in which he lives than a means by which he can recognize those elusive ideals that he has defined for himself as his own special goal.

Achieving these ideals will bring joy to his life. We are all not so jaded or old that we do not believe in fairy tales or the presence of God, hope for the ultimate good or some distant dream just beyond the horizon of imagination.

It is this elusive sense of hope that gives a person not only an interest in life and a desire to achieve something beyond his current achievements, but also a powerful faith in an optimistic outcome of his future destiny.

Each person by nature knows that somewhere there is a “pot of gold” waiting for him at the end of his own rainbow.

To reach it, a person is ready to go through the storms of life, from which he emerges “the captain of his ship.”

In astrological language, this “pot of gold” is known as the Pars of Fortune. Through the expression of this point on the map, a person feels at home and feels his right niche in life.

The Pars of Fortune is also the point whereby a person feels rooted in the center of their existence. It can sometimes take a lifetime to achieve life goals and ideals.

Those fortunate enough to reach this golden vibration early enough in life will have to go through a lot of struggle in a compressed, relatively short period of time.

The level of spiritual development of a person determines what impact the planet in the 12th house will have on him.

If he leads a philistine lifestyle, not wondering about the meaning of life, then it will be much more difficult for him to avoid the harmful influence of this horoscope house than for people prone to introspection.

When the secret of the 12th house is revealed to a person, a turning point occurs in his life: he begins to be pushed out of his daily routine, new aspirations and talents are revealed to him. So a person gets access to this storehouse of knowledge and wisdom of ancestors.

House 12 hides a tremendous amount of useful information, but it is not so easy to open it, it is always difficult, a person feels very lonely and thinks that no one can help him.

To direct the energy of the 12th house in the right direction and find out about your hidden talents, you need to seek contact with yourself. First you need to ask yourself questions: why am I here, what do I really want, do I like what I do?

Astrology is full of symbolism, and the 12th house, as the very last house in astrology, is responsible for the feet. To stimulate the 12th house, you need to walk barefoot as often as possible, preferably in a natural area.

Going out to nature, a summer residence or the sea, do not miss the chance: take off your shoes and walk barefoot on the grass or sand.

To fully work through the 12th house, you need to do something extraordinary – this will help to awaken and realize yourself, to understand your difference from others.

For example, walking along the road, you can suddenly turn around and go with your back or open the door not with your right hand, as usual, but with your left.

Gradually, you need to train your brain to think not stereotypically, then individuality will begin to wake up and the 12th house will appear.

But, alas, this is not painless. Everyone around continues to live within these frameworks and stereotypes, so it seems that by destroying the framework, a person becomes superfluous and alien.

After overcoming this period, the personality discovers a connection with the collective unconscious, like-minded people and teachers are immediately found, and the 12th house ceases to seem so creepy.

Part of Fortune in 12th House – Meaning and Symbolism

For many years, ruling forces, such as religious structures and political power, suppressed individuality and the desire for self-knowledge in people in order to control the masses and obey general laws.

As a result, from generation to generation, all suppressed aspirations and denied talents for several centuries have been concentrated in the 12th house. Few people know, but symbolically the 12th house of the horoscope is the collective unconscious.

That is why it is associated with what is hidden and hidden, it is a container of secrets. Moreover, according to Jungian psychotherapy, the repressed energy of talents is “wrapped” in the framework of mental traumas that distort the idea of ​​the world and are passed on from generation to generation.

And the planets in the 12th house just help this. A traumatized society is very convenient to manage.

Some researchers of modern astro psychology have made a great contribution to the study of the 12th house of the horoscope and have identified a connection between the negative impact of the planet in the 12th house and suppressed childhood fears.

That is why the 12th house of the horoscope is traditionally associated with fears and vicious addictions.

This is its sacred meaning, therefore, for every planet in the 12th house, such a situation can turn out to be both a destructive force and a true revelation.

Contact with the Higher When a small child is born, he has an innate connection with the collective and the unconscious. He knows who he is, why he came to this world, where his best path is and how to achieve the highest happiness.

But, growing up, he finds himself in an environment full of restrictions, where he is dictated by the rules of what can be done, what is not, so he loses contact with the self.

The connection with the unconscious, lost since infancy, can be revived by discovering the secret of the unknown with the help of working through the 12th house.

Distorted essence of planets If a planet falls into the last sector of the map, it is very difficult for a person to manifest on this planet. He feels limitations and misunderstanding, but at the same time the desire to express himself remains, for the energy of the planet in the 12th house does not go anywhere.

Because of this, an internal conflict arises within a person.

The energy of the 12th house is directed inward, towards self-destruction of a person, which can subsequently lead to severe forms of alcoholism, drug addiction and an inexplicable craving for a criminal lifestyle.

A person, whose planet is in the last sector of the map, feels himself chained in an invisible frame. He seems to be tied hand and foot. For each planet in the 12th house of the horoscope, this constraint will manifest itself in a different way.

If the Sun is in the 12th sector of the chart, then it is difficult for a person to openly express himself in this world

. Therefore, he will assert his individuality and try to achieve what he wants through intrigue, squabbles and dirty tricks.