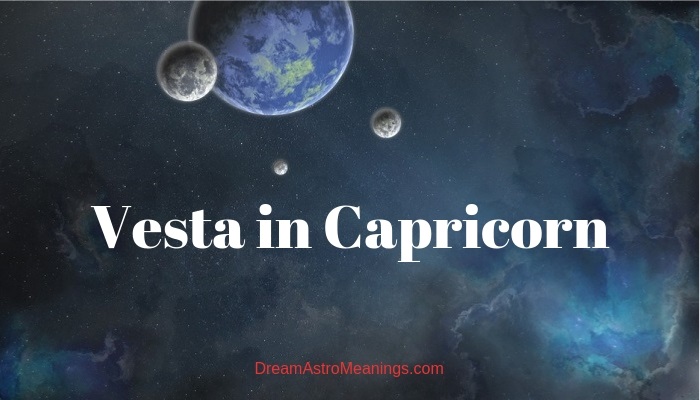 Vesta, the asteroid, is the fourth discovered and the second heaviest asteroid. It was discovered in 1807. It has two enormous sized craters on its surface which are considered a product of collisions which happened billions of years earlier.

Meteorites from these collisions are found on the surface of the Earth. This is the brightest asteroid that could be seen from Earth’s surface.

The name Vesta came from the ancient Roman goddess of home, family, and the hearth. Vesta was the guardian of the Roman people and was represented as a fire burning in her temple in the Roman Forum.

There were six of them and they were chosen by the chief priest of Rome, the Pontifex Maximus. Later, from the time of the emperor Augustus, that role transferred to the Emperor.

The Vestals were chosen from girls who were six to ten years of age. These girls were supposed to give consent that they would remain virgins at least another 30 years. After that time, Vestals were released from their service.

One of the main duties of Vestals was to take care that the sacred fire in Vesta temple never seizes to burn. The belief was that the fire burning in Vesta temple protects Rome and if it was extinguished something bad would happen to the people of Rome.

The Vestals who failed to perform their duties were bitten or severely punished in some other way. Vesta was considered the cleanest of all the deities. Vesta was a virgin, but was prayed to by women who couldn’t conceive or have children.

The Vestals performed rituals for fertility and good harvest.

Vesta in astrology indicates the way we deal with issues related to our work, sacrifice, devotion, integrity, and refraining from personal relationships.

Vesta rules different conditions in our psyche caused by refraining from physical intimacy or personal relationships. It also reveals the issues we have because of our fear of intimacy.

Vesta placed in a sign and house in our natal chart indicates the areas where we need to focus on, as well as the things or people we should get rid of from our lives. Vesta also demonstrates our way of dealing with our passions and our physical needs.

This asteroid indicates whether we suppress them or we exhibit them freely.

Vesta also points out the areas of our lives where we need to devote ourselves. It also indicates the areas where we feel restricted and lack initiative or space for action.

The asteroid Vesta also demonstrates our devotion to something or someone, such as a project, belief, a cause, person, etc. It also indicates the areas of our life where we have some issues we tend to ignore or we choose not to share them with others.

They are usually very important areas of our life, but we keep experiencing issues related to them.

Vesta is the asteroid which instills us with persistence to maintain our focus to achieve our goals and resolve the problems we encounter during that time.

Men with Vesta in Capricorn are very detailed, precise, and organized. They know their goals and are focused on making plans for accomplishing them.

These men can be very rigid about their beliefs and their behavior.

They don’t like to lose control over situations (and even people) and that is why it is hard for them to relax in relationships with people, especially romantic and intimate ones.

They are very responsible and make sure they are performed on time.

Women with Vesta in Capricorn are organized and detailed. These women (just like men born with this placement) strictly obey the rules.

They don’t like changes and tend to resist them. They have difficulties adapting to new circumstances.

These women have a hard time relaxing and showing their emotions. Many of them have issues with intimacy and intimate relationships.

They are very responsible and reliable. They make sure they keep things in their private and professional life under control.

These women are excellent for work in the area of administration.

When Vesta is placed in Capricorn, it makes people born with this placement work best when they are organized and disciplined.

Their efforts are usually motivated by their personal ambition to succeed and be very accomplished.

They are very capable of making the best plans to accomplish their goals and successfully implement them.

Their abilities make them excellent in administration work. They rigidly follow the rules and sometimes that can make them overly rigid.

They can sometimes have issues with relaxing in intimate relations and expressing their emotions. They can appear very cold and reserved, although that might be a result of their inadequacy and inability to relax and open up.

They don’t want to be in a position of losing control over matters and situations, which could cause them to try to be controlling and manipulative in their relationships. They don’t like to be criticized and judged.

These people are very organized and disciplined which enables them to achieve great success in life. They are traditional and don’t like to make changes.

They prefer the status quo which is the safest way to keep their control. They have strong willpower and power of focus.

These people are very responsible and take their duties seriously. Their focus is mostly on building integrity and strength in all aspects of their life.

People with Vesta in Capricorn are precise and detailed. They pay much attention to organization and making plans to achieve their goals.

Their systematic approach makes them successful and accomplished.

They don’t like losing control and can behave very rigid and cold in intimate relationships.

They are very responsible, and people can rely on them freely.