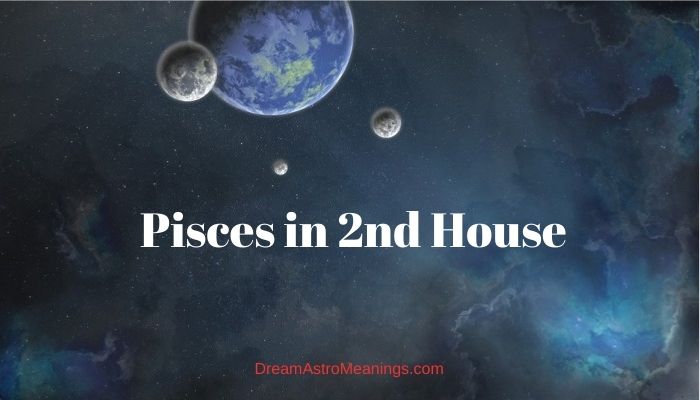 The influence of Neptune as a ruler with the co-ruler Jupiter shows an imaginative, withdrawn at first glance person with beautiful eyes and tactical manners who possesses exceptional inner strength which he shows when he is most needed. The power of perception is fascinating.

These people can be extremely popular with the opposite sex, but their emotions are of great importance, so they are always there on the principle of white – black. They feel best when they are in love and when love is returned to them.

They often think much more deeply about the past, childhood than it seems to their environment. Often, due to vulnerability and double water, which intensifies sentimentality, they can be extremely nervous, and they are prone to foot injuries, poor circulation, and sensitive eyesight.

Yet in business they possess great creative talent and high standards. They have a very big responsibility, and although this is more of an artistic combination, these people can do great in jobs related to the highest state institutions, jobs related to health, economy, banking, and accounting.

They often feel and see ahead (one should always follow that feeling that other fish do not have). Most (if there is a stallion of planets in Pisces) can show extraordinary abilities to predict things that will happen.

They really need peace, and they like that something is happening in the family, that there is some action, changes.

They are often inclined to idealize the people they love, while from the moment of marriage they can find balance only with an objective, realistic, diligent, but more discreet person. They know everything and sometimes pretend to know nothing, because sometimes they just need confirmation of what they feel.

This is the noblest combination of Pisces who likes to help, but who personally knows how to put himself in an awkward position sometimes.

There is a constant search for an ideal, perfection, so no matter how much a person does, he thinks he can do better, he just feels that he deserved better.

It can be strongly related to close relatives and family. It has a hidden sense of interior, so it always lives in a space that it can arrange itself. Stronger colors suit her.

Self-confidence, acceptance and trust are very important to her in business, and then she does great things.

She loves freedom and no matter how emotionally vulnerable she is, Double Pisces will not easily get married and may happen to choose for a long time.

In marriage, one should avoid criticizing one’s partner, unnecessary desire for an ideal, because one can have opportunities for a stable community and happy offspring.

It is better for this person to first express himself professionally, solve some housing solutions, and only then create a family and community, otherwise he may be dissatisfied, especially in middle age. He easily falls for compliments, he often easily scans other people’s mistakes, but this is a person who has an exceptional sense of exoteric, painting, music.

Although the combination of a double Pisces represents a hypersensitive person, he adapts quite easily to the new environment, he is easily accepted, but he tries to have a small but real friendly environment around him.

Just as he falls, so he gets up, so it cannot be said that this person is just as gentle as, even stronger than others think he is.

What can always lead to a fall and a period when he does not cope and does not come to the fore are family conflicts, difficult emotional relationships or cold relationships, which is the hardest to bear, while all other fields come quite spontaneously and show a remarkable line of sacrifice with which was also born.

This person loves children very much and her children. She prefers to go crazy, and for her, apart from contact with water, it is the best vacation.

She must constantly invent changes, move and be in a positive environment, in order to be constantly satisfied.

Although this is a dreamy type, she is still a person who can achieve more than others expect from her. She sees a lot ahead and her advice should always be accepted.

They are not inclined to demonstrate their financial position, or prove something to someone, or make an impression on someone, they are simply NOT IN THE STATE (of course, if there is no support from the “pragmatic” indicators of the card), really evaluate your financial life on a more or less long distance.

she can go to the store “with big eyes” to buy full packages of everything in the world, come home, lay out everything she has bought and stand looking at the purchases, not understanding where the money was spent. Then she will talk about how “now everything is just VERY expensive!”

But if you go through her purchases, it becomes clear that she simply does not need most of the items chosen, or she buys the most expensive in the corresponding segment. In general, Pisces is often a typical “advertising victim” or “stock”.

Her antipode Virgo also loves discounts and promotions, but unlike Pisces, she only participates in REAL promotions. Let’s say she chose something for herself, asked the price, tried it on, waited for real discounts, went and bought it.

But Pisces “believe in the word” to sellers who write “150% sale” and it doesn’t matter to her that there can be no such sales in nature J she saw – and believed that she needed it. Or promotions like “take 2 things, get the third for free!”

The pragmatic Virgo, before joining this event, will compare the prices of this store with others, compare the goods and most likely refuse the initially tempting, but in fact, failed offer.

Although she finds it harder to bear criticism and failures, she always manages well. She is sometimes prone to fatal events or loves.

Often when he does not feel well in “his skin”, he likes to run away from everyone to his hidden place or on some vacation. Her appearance simply entices, attracts people with similar energy, so she can often have unplanned fateful private situations. When he suffers, it lasts a long time and one should avoid the sorrow from which this person can get sick.

Although the current period reinforces strong thoughts and the feeling that something important is in front of this person, the further period brings double Pisces the possibility of great changes in the family and housing plan, some expansions, weddings and beautiful events.

At the moment, the imagination and creative abilities of this person are more pronounced, so this should be put on paper. Contact with God is very important, because the double Pisces are also God’s children who always get more paths and chances to move forward.

They can often be prone to vices, especially in periods of sadness and under the influence of a bad environment in the early period, which should be avoided the most. These are the best actors and musicians.

Quite often, for people with Neptune or Pisces in the second house, one of the key questions of consultation is money. The question is formulated as “no money!”, but when you start to figure it out, it turns out that everything is not quite as the Native sees it.

Neptune is a fertile, watery Planet that governs the female fertile Sign – Pisces, which naturally implies a rather good breeding of something for which they are responsible in the horoscope.

In the process of working with the Client, it turns out that Neptune, being an element of the second house (through constellation or management is not important), in fact, gives not those people to whom money does not come, but those who do not linger, slipping through their fingers.

A very common problem of second-home Neptunian’s is that they are extremely not attentive to their spending and almost always complain about the “water” nature of money, so literally and formulating their conclusion in the process of working with an astrologer “money flows through the fingers” or “money is like water “.

When a person leaves the definition prevailing in his head and begins to reason, he himself says that it turns out that he earns good money or receives a decent income from other sources, but it is completely impossible to keep them. Money seems to slip through your fingers.

But the problem is that the native manages to spend this money VERY quickly, often not even being able to formulate where exactly this money was spent. And in the end, she really does not have enough of her salary until the end of the month.

She has to borrow, which is also not clear for all second-home Pisces – in this matter it is just as difficult for them to navigate how much money they need, what to patch up the resulting “hole” and at the same time not take too much (after all, they have to give).

And then again the same story – I got the money – I paid off one debt, I paid off the second debt, and again without money.

That is, the main problem of second-home Pisces (or non-Neptunian’s) is precisely inattention to spending. Pisces is not Aquarius. If the latter gives an extreme degree of instability in income, discrete earnings that interfere with planning your budget, then Pisces generally has a good attitude towards replenishing Native’s wallet.

Being unaffected, Neptune as ruler of the 2nd house is a very good option for breeding money. His first and main problem is lack of organization in the money issue. He does not understand how to interact with money at a more or less long distance.

If we say Sagittarius or Leo, it is common to show off. They can come and buy something more than planned, something more expensive, and thus also put themselves in some way in an uncomfortable position.

But at this moment they UNDERSTAND that they are exceeding, and that they will have to “get out” (which, I must say, is rarely an overwhelming burden for them).

But Pisces do not have a penchant for drawing (as a rule), on the contrary, they can “muddle up” something, not talk about how much they get, avoid specific questions, answer evasively, etc.

By the way, it is not uncommon for second-home Pisces to tell that they lose money, wallets, cards (especially if they are defeated).

Someone openly claims his money – these are torn off phones, or hats, these are bags torn from their hands, these are attacks with threats to use force, etc.

And Pisces is often the one who forgets the bag on the bus, or forgets to close the lock on the bag, and does not follow it on the same public transport or in the bazaar, in a large store, etc., as a result of which, someone is calm can take advantage of their forgetfulness or inattention and quietly steal what Pisces has “framed”.

More often I come across such Pisces, which, in principle, have a good income.