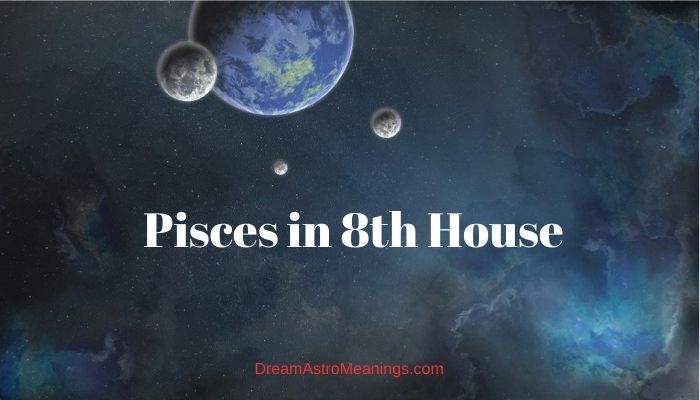 Pisces often enough gives people fearful, apprehensive. And all those topics that are signified by Pisces, in this case, as a rule, are perceived by the Native with a sufficient degree of caution.

Also, Pisces indicate good intuition, as a result of which the native avoids many dangers, precisely because he felt something unpleasant in the situation.

The house of huge gains and losses, big business and risk, reveals the source of danger for the native. They can become fatal if you are not careful and ask for trouble, which usually happens to those who do not know the sign on the cusp of the eighth sector.

The subconscious need for transformation forces an unenlightened person in astrology to re-live the same crises.

The 8th house in Pisces is an indicator of worked out karma, when a person has learned to react to sudden changes, illness and possession of wealth from the standpoint of all signs of the zodiac.

Due to this, the native’s main wealth is deep intuition, which helps to feel danger everywhere, except for water, illusions, alcohol and psychotropic substances.

Acutely experiencing injustice, understanding how everything is arranged at the expense of many previous lives, the native seeks to escape from reality into the world of dreams, which leads to poisoning and addictions.

The main source of problems for men and women with the 8th house in Pisces is alcohol. At first, it dulls the fear of the experiences and emotions associated with fame, big money and the management of other people’s resources, experienced in past incarnations, helps to relax after prolonged nervous tension, but later a powerful addiction to “painkillers” arises, and later terrible things happen.

An intoxicated native is robbed, humiliated, exposed to ridicule, he may suffer from sunstroke, allergies, frostbite, or suddenly there will be a knee-deep sea, and he will start boasting, balancing on the edge of an abyss.

The owners of the 8th house in Pisces can freeze to death in the snow or drown in their own bath due to an addiction to alcohol, although if not for this, they would have reached brilliant heights in art and production.

In addition to this, the native is exhausted by internal dialogues, fears and fantasies on topics that are painful for him.

You need to understand that, thanks to the influence of Neptune, the eight-house Pisces has a rich imagination, which obediently draws whatever you want according to the schemes of the subconscious, and turn this gift for good, transforming it into creativity, charity and scientific research.

Passion and money Native literally dissolves in sex with a loved one. For him, there are no forbidden topics and actions, he is included in the energy of a partner and seeks to generously endow him with affection and tenderness. With the defeat of Neptune and Venus, there is a tendency to debauchery or sacrifice.

For example, a young girl marries a wealthy old man to save her family from poverty. This is the act of the eight-house Pisces. Money in this situation is always fraught with the danger of being deceived, with losses and unexpected waste off-topic.

With the harmonious position of the planets, the native is an ideal partner in intimate relationships, sensual and caring. Men and women are equally attentive to the emotional experiences of their chosen ones, they love to make romantic surprises and gifts.

They often manage huge financial flows of other people, not considering themselves worthy of great wealth, or they are simply not interested, given that Pisces completes the zodiacal circle, which means that in past lives the native has already experienced different ways of owning money.

Working out the 8th house in Pisces If you are tormented by fears and anxieties related to the issues of death, wealth, occultism and mental health, then negative karma has accumulated, many topics have not been worked out and this needs to be done here and now.

The native is shown to work with the family from specialists, through meditation and constellations, to get rid of fears with the help of a psychologist and be sure to engage in creativity.

Dancing, music, acting, painting release powerful Neptunian energy, but to keep it from being carried away into the maze of illusions, you need to ground yourself through the study of financial literacy and the practical application of skills, such as investing.

Caution on the water, refusal of alcohol and communication with drinkers, to lie and appropriate what is bad is the guarantor of the harmonious development of the 8th house in Pisces. Jewelry-talismans that help to dispel the fog of perception of the world will be a good help: serpentine, amethyst, larimar, labrador and charoite.

The direct signification of Pisces is Water. And here, as always, it is considered in the broadest context. Having Pisces or Neptune in the 8th house (in case of defeat), the danger of drowning is high enough, many owners of this indicator drowned.

Most of them, to a greater or lesser extent, experience fear of “open Water” (when they do not feel the bottom under them), someone complained about the fear of traveling on water.

But, in addition, it is also the danger of flooding. There is a high probability of being affected by floods – from tsunamis to banal river floods.

The direct signification of Neptune is asphyxiation. Again, in its various manifestations – there is a danger of choking, being strangled (of course, all this with other indications and serious defeats), suicidal things associated with suffocation (hanging) or taking medications – this is also Neptune. All types of allergic reactions, including those causing edema, which can lead to suffocation, occur here.

Here is poisoning with gases, again in the broadest sense of the word – when, during a fire, people die not from fire, but from suffocation. Or a gas leak, or poisoning with exhaust gases, and even paint vapors, or another chemical – these are also Neptune and Pisces.

Can talk about the relaxing effect of alcohol – fell asleep, did not see, and did not have time to react. Or its weakening properties – as a result of strong intoxication, could not reach the house – fell frozen, or vice versa – received a sunstroke, or hemorrhage, etc.

Alcohol also weakens the sense of danger, as a result of which the sea becomes “knee-deep”. In this regard, all actions of a person committed by him in a state of alcoholic (or other) intoxication become potential sources of danger.

It is probably obvious that alcohol itself and all its analogs become dangerous for the owner of Pisces or Neptune in the 8th house, as they can go into a state of addiction.

And of course – be careful when using cosmetics, household chemicals, hair dyes, food additives and, of course, medicines! Ask for allergy tests in the office of a doctor or beautician, try cosmetics first on the wrist, and only then on the face (as they say on all tubes), etc.

The use of anesthesia, as one of the purest significations of Neptune / Pisces, must also be thought out, applicable only for medical reasons and under the supervision of an anesthesiologist.

Remember – from a simple trouble in the form of peeling of the skin and an itchy rash, you can get Quincke’s edema and anaphylactic shock. This will be especially true, of course, in the presence of intense interaction of 1,6,12 houses with the eighth.

And this is understandable, BUT, in addition to a drunk driver, it can be a tired driver (fell asleep while driving), it can be a driver, say, inexperienced, but cheating on his own account, etc.

The 8th house in Fishes means that such a person is permanently assigned to the occupational health problems associated with a member of the corporate business (corporate environment) and The uncontrolled growth of long, possibly, it will put on the edge of bankruptcy.

Serious difficulties are possible with inheritance and separation of group properties. 8 House in Fisheries – Human Characteristics Understanding the mortality of all living things is very painful.

Such subjects do not like to think about the end of life, by all means they hold on to being and in any way try to prolong it. The position of the drug is noted. Due to the inheritance, this person is not too serious, the person feels the fundamental inessential of this problem for life.

They come, flow and occur unexpectedly, without interruptions and accents. It is very important to pay good attention to details, not thinking exclusively of intuition, otherwise, it is possible to seem to be deceived as by such fateful people. Extreme situations are softened and even powerful overloads are easy.

With the disharmonious development of the temperament for the completion of the changes, you will need a few attempts, and for the sake of questions, you will not be allowed to do so.

It is very important to realize that substantial external changes only reflect the corresponding mental shifts. Psychological crises are quite difficult to define, because even the person himself only does not understand what is going on with him.

Elementarily he does not like the inner and the surrounding reality, he wants something incomprehensible and vague. Internal variables are not seldom associated with strong depressions, mediocrity, and sterility. Getting rid of such adolescents requires from a person of little internal honesty and great self-confidence.

Such people intuitively feel the values ​​of the group’s ethics and manage to obey them with their own fundamental principles, which makes many of their favorites, and ultimately unpredictable and eccentric.

This person should learn to be natural and at the same time respect the settings of the community, and for this, first of all, you need to start and start. He is quite sensitive, and then, when he suffers someone, he is able to increase the power of personal intuition in a positive way.

He needs to learn to act with others and encourage those in need.

As a result, he realizes that personal mistakes can be learned quickly.

Whenever he is asked about the property of a partner, then he can end up with recriminations and deceptions. It is very sensitive to consideration of its sexual abilities.

Harmonious Pisces will soften all marginal situations, and even in moments of strong overload (physical and mental), it will not be too difficult for a person.

The defeat of Pisces gives, on the contrary, constant unsuccessful attempts to resolve external urgent problems, especially the change of egregor, and they can apparently change, remaining essentially unresolved and unchanged.

Pisces should remember that it is much more difficult to deceive God than to deceive themselves, that significant external changes are always only reflections of the corresponding internal ones.

Psychological crises here are difficult to accurately diagnose, and the person himself often does not understand well what is happening to him.

It’s bad, dreary, disgusting to look at the world, sometimes you want something (or someone), but not for long, and besides, it’s not clear whether you really want to or is it so, a petty whim and deception.

However, in a neglected state, all this ceases to seem whims, but turns into severe depression, hysteria or mediumship, connection and friendship with the lower astral plane, to which this situation generally predisposes, and treatment here is very difficult and requires a great inner honesty and dedication from a person.