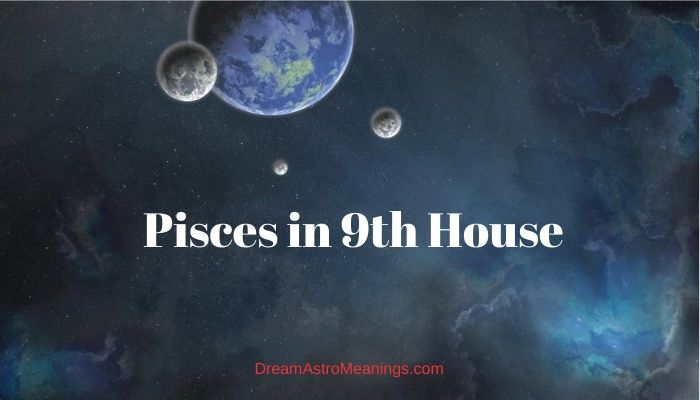 The Ninth House represents religion, spirituality, philosophy and long-distance travel. There are many aspects to this house – after all, each person experiences spirituality differently.

The ninth house is ruled by the sign of Sagittarius and the planet Jupiter. Since Jupiter is the planet of Fortune, the state of home can show us how the random events of our reality can affect us.

All the philosophical pursuits of man come under the control of this house. Regardless of whether he is learning something purposefully or he is simply broadening his horizons, all the accumulated knowledge is questions of the 9th house.

In the life of such a person, religion and mysticism play a special role, his life philosophy and spiritual faith have a mystical coloring and are most seriously involved in solving internal problems and resolving life conflicts.

Such people gravitate towards literature of a mystical nature, affecting deep emotions. They are close to the symbolism of the ocean, underwater life and hidden currents.

There is a tendency towards aimless wandering, travel and even vagrancy. The attitude towards philosophical doctrines and higher education is characterized by a special intimate emotionality.

This person wants to be soft, gentle, loving, warm, sympathetic, romantic, and attentive to other people’s sufferings and experiences, plastic, able to adapt and find mutual understanding. He is abhorred by rigidity, intransigence, superficial enthusiasm, inertia, straightforwardness, earthiness, coldness and excessive pragmatism of the mind.

The relationship with the ideal “I” develops soft and respectful, with a tinge of self-indulgence, narcissism, demagoguery and shamelessness.

External manipulators, appealing to the ideal “I” of such a person, can completely enslave him, having received it entirely at their disposal.

It is very difficult to find the main core of the worldview, it is even more difficult to get unambiguous answers to specific life questions.

The ideal “I” is sometimes too high, sometimes too low, the temptations of self-deception are strong, the inattention to oneself is great.

The expansion of consciousness goes through a change in the spectrum of emotions, as well as the nature of a person’s emotional reactions to the same situations. What used to excite to tears and rivet attention, now does not touch at all.

Often this is accompanied by a crisis, self-deception and posturing – a person pretends that nothing has changed.

Sometimes crises occur latently and imperceptibly, as a result, a new person is born, to the complete surprise of others. A spiritual teacher has a tremendous influence on such people, but it is not expressed externally, but in the nature of the strongest emotional and existential connection.

Far countries excite and attract, while in other cultures a person immerses himself entirely and surprisingly quickly adapts to them. Higher decrees reach the mind of such a person from the depths of the soul and testify in a very quiet, inconspicuous voice that can be heard only by calming all your feelings.

Such a person treats religion mystically, in general he is devoted to mysticism more than abstract intellectual pursuits. He is in constant search of a deep foundation for his own life, tirelessly builds his own religious philosophy. Can be very spiritual and developed.

Thanks to innate tenderness and the gift of compassion, she can be a good educator and a good healer. He loves to travel on water and happily rests near a lake or river. Often such people spend their entire lives in distant countries.

He is responsible for what we subsequently do with the information we have learned. About how we structure our own belief system, the awareness and understanding that we can achieve through our observations and filtering the information received.

Higher education is part of the 9th house; university, masters and doctoral degrees are easy to foresee due to the presence and state of the planets in this house. Here you can observe whether a person will attend higher education institutions, whether he will complete them or take an academic leave.

Another thing ruled by the 9th house is long trips and even moving to another country. The ability to accept someone else’s culture, lifestyle and way of life, love of long-distance travel or forced business trips all fall under the responsibility of this house.

It determines whether luck will favor you or not, whether you can get around trouble without much effort or not. He gives a penchant for charity and generous deeds.

People with many planets that are well located and different from each other can make excellent teachers or professors in universities. Similarly, the strong 9th house is often found in the horoscope of prominent writers.

The Sun The location of the Sun in the 9th house bestows love for travel, forcing a person to visit many distant places and spend a long time there. But this does not characterize you as an ordinary tourist.

People with such a disposition strive to delve into the traditions of a foreign country to get to know them as best as possible and feel for themselves.

The sun in the 9th house often indicates scientific work and research. The education of such a person is closely related to self-esteem and is the driving force behind his success. He simply cannot afford to be uneducated.

Knowledge is an important part of his life and he will continue to explore and expand his horizons for the rest of his life.

Moon with the Moon in the house of philosophy, a person develops high spiritual and moral values. The moon in the 9th house indicates that the mother and father can be of different cultures or nations.

The moon in the 9th house gives a sensitive and receptive mind. This creates the dreamer and visionary. A person wants to change the world and can be involved in some kind of good deed.

On the other hand, the Moon gives the objects of the house a rather unstable character. A person may often change their thinking and philosophy, or have many hobbies and switch from one to the other.

Since the Moon is a passive and receptive planet, its position in this house allows a person to easily assimilate information by ear. He is a lifelong learner, and no matter how much he learns, there is always a feeling of dissatisfaction.

Even with the same move, we do not rate the 9th house as the main one, because the move is not the 9th house. Moving is still the 4th house. Yes, if we go far in search of new prospects – then in connection with the 9th. If the move is forced or significantly reduces your social activity – then from the 12th. Well, for short distances, as you know, the 4th, together with the third.

House 9 appears to be moving abroad. In fact, it is rather a move to a different mentality, a different linguistic and legal environment, into a radically different way of life. You can move, for example, from Kazakhstan to Georgia – and this will be the 9th house (even under the Soviet Union). Or from Uzbekistan to the Baltics.

Or in modern Russia – from Krasnodar to Anadyr. This will all be a move around the 9th house (unless, of course, the 12th house intervenes). In addition, the 9th house is responsible for relocations associated with the expansion of opportunities, an increase in potencies (from a village near Barnaul to Moscow – why not the 9th house?).

But, at the same time, despite the fact that according to the connection of the 9th house with the 4th in the natal chart, we assess the potential for moving, we do not focus on its condition in order to make a judgment about the expediency of moving to a specific area. In order to determine how things will develop in the place where Native moved (or is going to move).

9 home is a foreign country when you go somewhere, and this place continues to remain foreign for you. At the same time, I repeat, CONNECTION 4 with the 9th, indicates the POSSIBILITY of moving far away.

As for the 9th house in terms of a foreign one, here in general everything is foreign. If you have a completed 9th house, you may be interested in foreign cultures. By the way, again, it is not at all necessary that it will be the culture of another country; it may just be a different culture that is not native to you.

For example, living in Kazakhstan, being Russian, Native can get carried away by Kazakh culture. Or a person from an Orthodox family finds himself in Islam, etc. Having a completed 9th house, a Native can realize his interest in a foreign language, in the study of foreign languages.

A person can get carried away with distant countries, and strive to travel a lot, but at the same time, a filled 9th house DOES NOT guarantee the native the POSSIBILITY to travel a lot, he can only lose at the level of aspirations (after all, in order to travel, you also need money, unless of course the native is not a fan hitchhiking).

The owner of the horoscope can read a lot of foreign literature, listen to foreign radio (as it was during the Soviet Union, for example). A person may know more about the sights and history of distant cities, which he has never been to, more than the inhabitants of these cities or the guides who lead excursions around them.

That is, a completed 9th house may indicate an interest in foreign and distant, but it is not at all necessary that this interest will be realized outside. At the same time, naturally, we need to analyze the connections of houses.

And here it can be like something foreign, say – a translator, a flight attendant, or a seller of foreign goods.

So any other topic – pedagogy, jurisprudence, religious direction, medical practice, etc. Or even, it can serve as an indication of the type “what I studied for, so I work.”

One of the most important topics of the 9th house is higher education. And here is also an interesting thing.

First, a person with a dedicated 9 house can be realized in the field of higher education. Or not necessarily the highest, but necessarily expanding the worldview – philosophy, theology, astrology, foreign languages.

It will be natural for a native to have an interest in the topic of education, study a lot, develop, get several higher educations, etc.