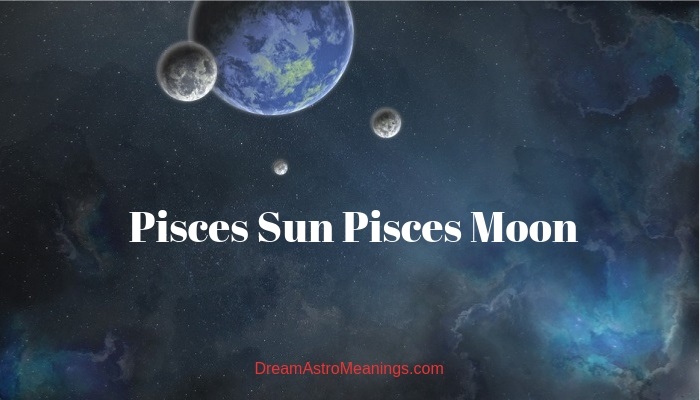 People with their Sun and Moon in Pisces are under a strong influence of this sign. These people have a very emotional and secretive nature.

Their element is water, which gives deep sensitivity and connection to the invisible realms.

The people with this combination of their Sun and Moon are often very religious and many of them devote their life to religion choosing to avoid the secular living, and giving themselves to god and life of renunciation of the needs of their flesh, following the path of spirituality.

Some of these people have a calling to spread the word of god as spiritual and religious leaders.

These people are usually highly spiritual beings and are devoted to the development of their spirituality even if they don’t choose to devote their lives to religion. They are often gifted with supernatural gifts, are highly intuitive, and are able to heal people, and/or foretell the future.

Many people with this Sun/Moon combination are powerful healers and devote their lives to helping people by using their God-given gifts.

The Sun symbolizes our rational personality and the Moon our subconscious. When these two are in the same sign, their outer and inner person has the same qualities.

These people are very sensitive and emotional. They are often empaths, able to sense the pain other people and living beings are feeling. They can easily get hurt and that is why they hide behind a mask of indifference.

It is hard to get to know these people because they don’t like to give up much of their personality traits. They don’t talk much and rather listen to what others have to say.

They are very intelligent and in combination with their heightened intuition, that can make them fierce opponents.

They read people’s minds easily and if the Sun and Moon make bad aspects with other planets of their natal chart, especially with Neptune, their ruling planet, they could be prone to manipulate others without them being aware of that.

These people can be masters of illusion and deception and if they desire, they can use their abilities to trick people and use them for their own benefit.

People with prominent Neptune and sign of Pisces in their chart, are often prone to escapism, unable to face reality and live in their self-created imaginary world.

They use different means to get to this imaginary world, mostly through ignoring reality, but also through using various substances to alter their consciousness, mostly with drugs. Many of them use alcohol or sedatives to help them ignore reality and forget about the issues waiting to deal with them.

Many of these people are prone to depression and negativity which leads them to the bottom of existence and it takes a great amount of energy and willpower (which they usually lack) to escape from their claws.

Being very sensitive, these people can be prone to attracting negative energy of the people around them and that is why it is necessary to protect themselves and try not to get much involved in their issues. This especially happens to people who do some kind of healing work or helping people in trouble.

Through their work they tend to accumulate negative energy of the people they work with and they need to find a way to release it.

In love, these people are very romantic and usually shy. It takes a lot for them to approach the person they like, and some of them never manage to find the courage to do that. They can be prone to idealizing their partners or the people they are attracted to, giving them imaginary traits.

Some of them have difficulties being alone while waiting for the right partner to come, which makes them enter relationships with people who are not a good match for them, which in turn causes them to get hurt and disappointed often.

They are not very passionate and prefer kisses and snuggling with their romantic partners to passionate encounters. These people (both men and women) can be very shy and require a lot of time to relax and become open about their intimate desires. They desire a strong emotional bond with their partner.

Although they can be prone to parallel relationships, changing partners, and cheating, these people could become extremely faithful when the right person enters their lives.

These people have a caring and nurturing nature. They love to take care of others, and they usually love animals very much. They love helping others and they do it sincerely. They love nature and spending time there.

They easily sense the mood of people around them, and often prone to pick up on it and begin feeling the same way. They don’t like quarrels, aggressive people and situations. They tend to avoid people and places which affect their mental stability.

They do it by disappearing. They almost never get into conflicts with other people and the easiest way is to simply vanish.

They often have artistic talents and are successful artists in different art fields.

The good traits of Sun and Moon in Pisces:

The bad traits of Sun and Moon in Pisces:

– escapism, dependency, depressed, self-indulgent, get easily overwhelmed by other people’s negativity, pick up on other people’s moods, overly emotional, addictive nature, prone to drugs and alcohol to help them forget about their problems, prone to idealizing their partners, prone to illusions and self-deception, prone to cheating, not faithful, shy, difficulties to relax, etc.

People with Sun and Moon in Pisces are usually very romantic and desire romantic commitment.

They can be prone to idealizing their romantic interests and that often leads them to wrong choices and disappointments. They need time to get to know their partner well before they can open up and show their true personality which is very sweet and kind.

These people could have a dependable nature and become needy in their relationships relying too much on their partners.

Some partners can be ok with such behavior, but many people consider such behavior suffocating and that makes them leave the relationship. It is important for these people to work on building their independence, self-reliability, and self-confidence, but also to choose their partners wisely.

People born with this Sun/Moon combination are usually commitment types, although their desire to be in a relationship could lead them to change many partners and suffer a lot because none of them is the right one.

Usually, they have a traditional view of relationships and commitment and desire to formalize their relationships through marriage.

Both men and women with this combination usually don’t take on a leading role in the marriage (although there are exceptions, when they have some influence of a stronger zodiac sign in their chart).

They satisfy with the role of the partner who is passive and accepts and follows the lead and organization of the other partner.

These people don’t have problems performing their marriage duties. The only issues might arise due to their personality traits.

Namely, they can be forgetful and lack focus at times, which causes them to forget their duties, but also fail to realize what their duties are because they weren’t listening or were occupied with some other thoughts when their partner was telling them what they needed to do.

It is important to note that they don’t have a bad intention when they behave in this manner; it is their nature.

They are ready to devote almost completely to their children and enjoy spending time with them. They can be overly permissive and allow their children to do whatever they want, and their partner is usually the one who will have the authority in their kids’ upbringing.

They enjoy spending time with their spouse and children, and are usually home types. They prefer to be in the comfort of their home than in any kind of adventure they could experience outside.

When they feel secure and loved in their marriage, they become very devoted and put in a lot of effort so that the marriage could be a lasting one.

People with Sun and Moon in Pisces are very romantic and they have a strong need to be in a relationship with someone. That need often leads them to enter relationships without giving them much though.

They are often prone to basing their decisions on temporary attraction and infatuation with someone.

Sometimes it is only their loneliness, which makes them enter a relationship. Because of these traits, these people need to carefully choose their partners and think well before entering a relationship.

Being influenced by the element of water, which makes them very sensitive and emotional, these people feel best when they are in a relationship with another water sign: another Pisces, Scorpio, or Cancer.

These signs are very emotional themselves, and they could easily understand them and relate to this person’s emotional state.

Another good choice for this person is an earth sign: Virgo, Capricorn, or Taurus. These signs are not as emotional as water signs, but can give this person the stability and security they require.

They also value the importance of a stable and organized life, which is also in alignment with this person’s desire for comfort and stable family life.

They don’t show their true personality easily and need first to get to know the person before opening up.

They are traditional and prefer formalized commitments in the form of marriages, but in some cases can be prone to promiscuity and changing partners, mostly to fulfill their desire for partnership and overcome their loneliness, which they cannot stand.

They can be prone to being dependent and rely on their partner in their relationships and marriages, as well as being overly needy and demanding, which are traits that some partners could find overbearing and deal-breakers.

They need to work on themselves and their self-confidence, and become more independent and self-reliable. They need to feel loved and secure in a relationship/marriage, and that is when the best of their personality traits begin to shine.

These people are excellent parents and enjoy spending time with their spouses and children.

They devote a lot of their time to their children and enjoy doing different activities together.

They are usually overly permissive with their children and that is why the other parent usually takes the role of the authority for the children.